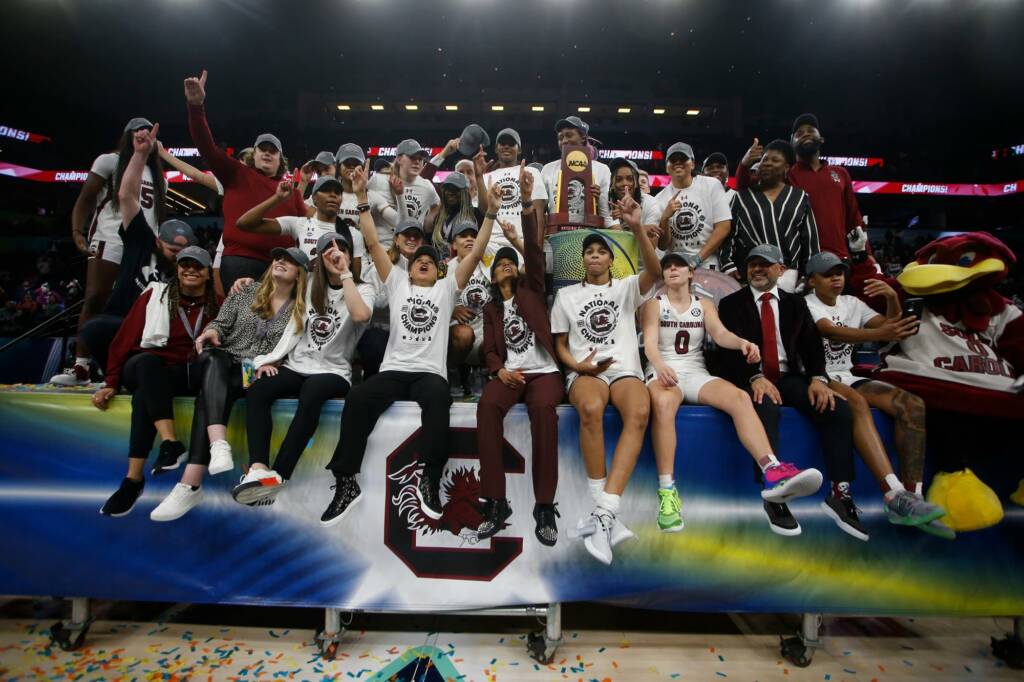 #1 Ray Tanner (1997-2012)
Ray Tanner served as head coach for the Gamecock baseball program for 16 seasons and wore No. 1 from 2002-12. Tanner led South Carolina to back-to-back NCAA Division I Baseball Championships in 2010 and 2011 as well as a pair of national runner-up finishes, six College World Series appearances, three SEC championships, six SEC Eastern division titles and a SEC tournament crown. He went to 10 NCAA Super Regionals in 14 NCAA Tournament appearances as well. Under the direction of Tanner, South Carolina’s postseason success from 2010-2012 is arguably the greatest run in collegiate baseball history. In the three-year span, the Gamecocks established NCAA records with 22 consecutive postseason wins and 12 consecutive wins in the College World Series. Tanner was named Athletics Director for the University of South Carolina on July 13, 2012. Tanner went 738-316 at South Carolina. His winning percentage for the Gamecocks was .700, the second highest winning percentage in SEC history.

#11 John Roche (1968-71)
Roche’s number, 11, was retired after a successful three-year tenure from 1968-71. Roche made one or more of the recognized All-America team in each of his three seasons. Roche holds USC records for three-year career point average (22.5) and points in a game, scoring 56 vs. Furman his senior year.

#22 Alex English (1972-76)
Retired after his senior season of 1976, the number 22 worn by Alex English was the last USC jersey number to be retired. English was a consensus All-American at South Carolina and is second on the USC all-time scoring list with 1,972 points. English started every game in a four-year span (111) and was a 52.8% shooter from the field in the process.

#42 Grady Wallace (1955-57)
Wallace, who wore 42, was the first South Carolina player to have his jersey number retired. Wallace averaged an amazing 28.0 points per game in his career and led the NCAA in 1957 with 31.3 points per tilt, edging out Kansas’ Wilt Chamberlain. Wallace holds down four of the top six scoring games in school history, scoring 54 points vs. Georgia in his senior year.

#43 Kevin Joyce (1970-71)
The third number retired in USC history was number 43 of Kevin Joyce. Joyce scored 1,400 points in his three years at South Carolina, averaging 20.4 points per game as a senior. Joyce, though, may be best known for out-jumping UNC’s Lee Dedmon (6-10) with four seconds left in the 1971 ACC Tournament title game, tapping the ball to Tom Owens for the winning bucket. Joyce was a member of the 1972 U.S. Olympic team.

#13 Martha Parker (1985-89)
Parker averaged 13.9 points and 5.9 rebounds a game and ranks fifth on the all-time South Carolina scoring list with 1,728 career points was named to the All-American team on three occasions, including a first-team honor in 1988-89. Parker is second on the all-time steals list with 284. Parker started all but two games in her South Carolina career (122 starts in 124 games).

#53 Sheila Foster (1978-82)
A 6-1 center-forward, Sheila Foster rewrote the South Carolina women’s record book during her tremendous career at USC and many of her records still stand today. The school’s all-time leading scorer with 2,266 points, Foster established herself as one of the dominant power forwards in collegiate basketball. The native of Spartanburg, South Carolina, started every game (134 games) during her four years. In addition, Foster holds the distinction of being the Gamecocks’ all-time leading rebounder 1,427 rebounds. During her four years, Foster averaged 16.9 points and 10.6 rebounds per game. As a senior, she averaged her career high of 20.2 points and 10.9 boards per game.

#2 Sterling Sharpe (1983, 85-87)
Sharpe, wore #2, is the school’s all-time leading receiver with 169 catches for 2,497 yards and 17 touchdowns. Sharpe had his jersey retired following the 1987 regular season. He became only the second Gamecock to have his jersey retired while he was still active at the school. In fact, both Sharpe and George Rogers played in the Gator Bowl in their final collegiate game. Sharpe was a number one draft pick by the Green Bay Packers.

#37 Steve Wadiak (1948-51)
Wadiak wore #37 for Carolina and was the first to have his number retired after a tragic automobile accident claimed his life. Wadiak, who still appears throughout the South Carolina record book, was the school’s all-time rushing leader for 28 years after his senior season.

#38 George Rogers (1977-80)
Probably the school’s most well known player was also USC’s Heisman Trophy winner – George Rogers. He had his #38 retired during halftime ceremonies at Carolina’s final 1980 home game. Rogers was the first USC player to have his jersey retired while still active at the school.

#56 Mike Johnson (1964)
Center Mike Johnson, #56, became gravely ill before the start of his junior season, and the illness cut short a potentially great football career. Johnson had finished his sophomore campaign as the regular center. When he died in 1965, his number was retired.

#11 Trinity Johnson (1995-97)
Trinity Johnson was a three-time NFCA All-American, earning the Honda Award, Fastpitch World and U.S. Olympic Committee National Softball Player of the Year in 1996-97. During the 1997 season, she was also the SEC Female Athlete of the Year, the SEC Softball Pitcher of the Year, unanimous First-Team All-SEC selection, three-time SEC Pitcher of the Week and two-time NFCA National Player of the Week. She continues to hold 11 school records and was inducted into the USC Lettermen’s Hall of Fame in 2004.

Terrence Trammell (1998-00)
Terrence Trammell was a 13-time All-American, six-time NCAA champion and an eight-time SEC champion during his Gamecock career. He was a silver medalist in the 110-meter hurdles at the 2000 and the 2004 Olympics and a seven-time World Championships medalist, including two gold medals. He was voted the 1999 SEC Athlete of the Year and won the 1999 Cliff Harper Trophy as the SEC Championships leader in points scored. He was inducted into the USC Lettermen’s Hall of Fame in 2006.

MIKI BARBER (1999-03)
Miki Barber was a 20-time All-American, five-time NCAA champion and an eight-time SEC champion during her time at South Carolina. She was a 2000 Olympian and a gold medalist in the 100 meters at the 2007 Pan American Games and as part of the 4×100 meter relay in the 2007 World Championships. She is part of the Carolina school record setting indoor 4x400m relay and the 4x200m relay. She has competed in 19 USATF Championships and was inducted into the USC Lettermen’s Hall of Fame in 2015.

Softball Conference Affiliations
Independent, 1974 through 1996 seasons
Southeastern Conference, 1997-current *
* The SEC did not sponsor softball as a sport until the 1997 season.