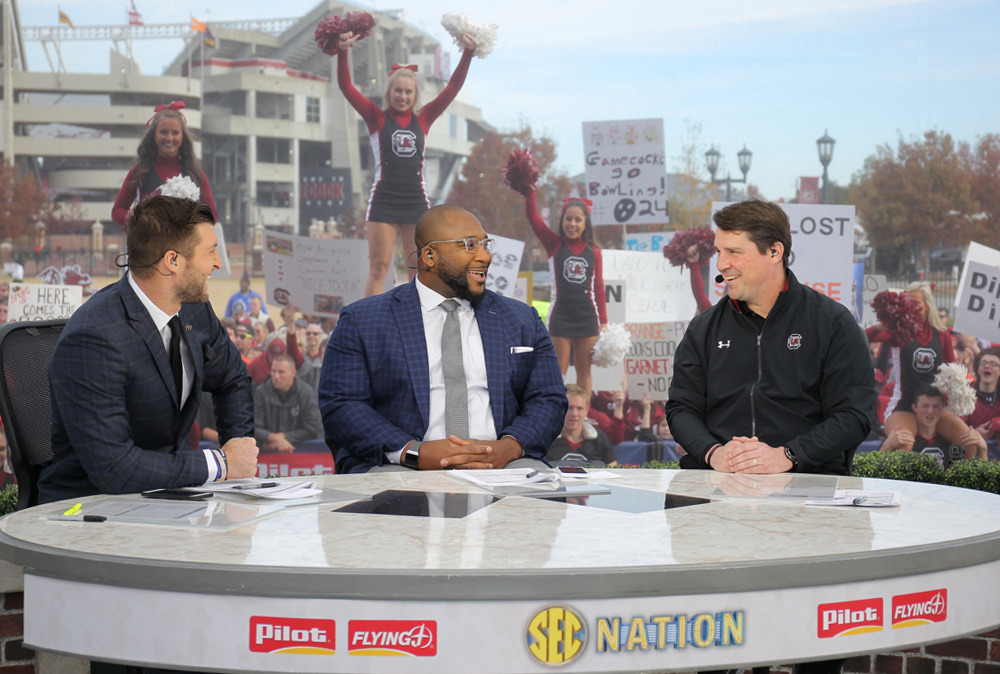 The SEC Network’s traveling pregame show, SEC Nation Presented by Pilot Flying J, announced on The Paul Finebaum Show Friday that it will head to Columbia, S.C. next Saturday, September 8 for the showdown between SEC East rivals South Carolina and #3 Georgia.

Airing live from 10 a.m. – Noon ET from Gamecock Park, the show will delve into the storylines of Southeastern Conference football, the weekend’s biggest matchups and more before the Gamecocks and third-ranked Bulldogs battle at Williams-Brice Stadium at 3:30 p.m. This is the first SEC matchup of the 2018 season.

Each show includes live reports, analysis and features surrounding the sights, sounds and storylines of SEC football, and will showcase the new SEC Nation demo field that debuted at the show’s SEC Media Days stop in July. Also new for 2018 is the weekly series “Nation Shorts,” from the creators of SEC Shorts.

This will be SEC Nation‘s fourth time in Columbia and the Gamecocks’ seventh total appearance on the show. In addition to the live show Saturday, Gamecock Park will play host Friday to The Paul Finebaum Show Presented by Johnsonville, which airs from 3-7 p.m. on SEC Network. Fans are invited to catch all four hours of #FinebaumFriday from the Gamecock Park set.

About SEC Network
The Southeastern Conference and ESPN launched SEC Network on August 14, 2014. The network televises over 45 SEC football games, 100 men’s basketball games, 60 women’s basketball games, 75 baseball games, and other events from across the SEC’s 21 sports annually. Programming includes in-depth analysis and storytelling in studio shows such as SEC Nation, Thinking Out Loud and Rally Cap, daily news and information with SEC Now, original content such as SEC Storied and SEC Inside, and more. Hundreds of additional live events are available for streaming exclusively on SEC Network’s digital companion, SEC Network+, via the ESPN App and SECNetwork.com. The network is also available in more than 50 countries throughout Europe, Middle East and Africa via ESPN Player, ESPN’s sports streaming service in the region.

About The Paul Finebaum Show