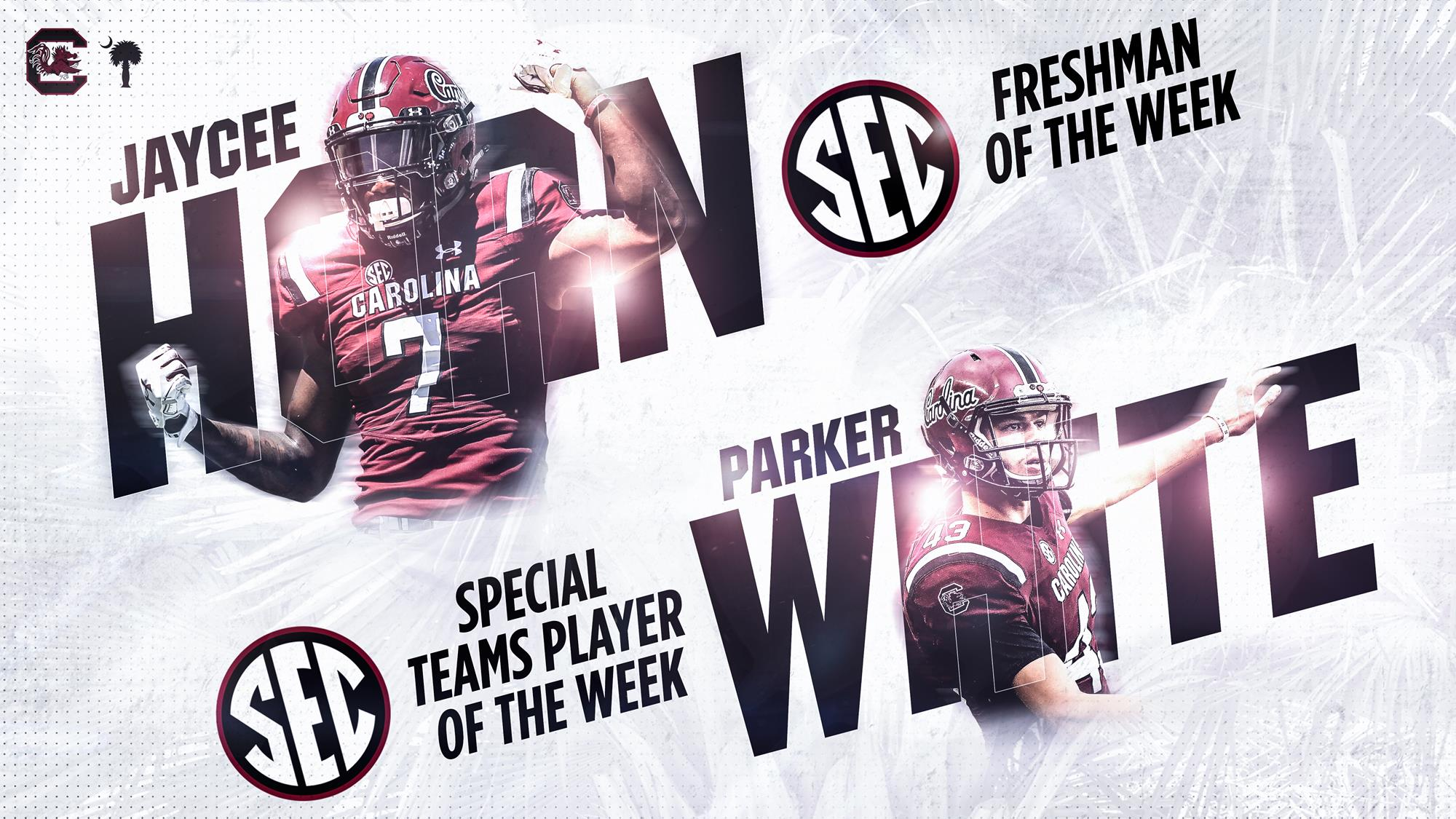 White and Horn Recognized as SEC Players of the Week

Parker White and Jaycee Horn have been recognized as SEC Players of the Week for their performances in South Carolina’s 37-35 win over Missouri, the conference office announced today.

White was named the SEC co-Special Teams Player of the Week, sharing the honor with Texas A&M’s punter Braden Mann. The sophomore from Mount Pleasant, S.C., tallied 13 points in the Gamecocks’ 37-35 win over Missouri. He hit on all three of his field goal attempts, connecting from a season-long 42 yards on two occasions, and a 33-yard game-winner with just two seconds remaining. All three of his field goals came in the second half when the field conditions were soggy due to a rainstorm, and gave the Gamecocks the lead each time (24-23, 34-32 and 37-35). It was the second game-winner in the final seconds of his young career.

Horn was named the SEC Freshman of the Week. The 6-1, 195-pound true freshman defensive back from Alpharetta, Ga., had an impressive outing and was a key factor in the Gamecocks holding Drew Lock to just 17-of-36 passing for 204 yards, as he was credited with four pass break ups in the contest. He also logged three tackles, including a key diving trip, forcing Damari Crockett to step out of bounds on the 11-yard line instead of taking it in for a touchdown. The Tigers ended up not scoring on that drive, which was a key turning point in the game.

White and Horn are the second and third Gamecocks to be recognized by the conference office this season, joining Javon Kinlaw, who was named the SEC Defensive Lineman of the Week for his performance at Vanderbilt.

The Gamecocks (3-2, 2-2 SEC) will be back in action on Saturday, Oct. 13, when they host Texas A&M (4-2, 2-1 SEC) in a 3:30 pm ET kick at Williams-Brice Stadium in Columbia. SEC Network will have the broadcast with Taylor Zarzour and Matt Stinchcomb in the booth and Kris Budden on the sidelines.

SEC Players of the Week: