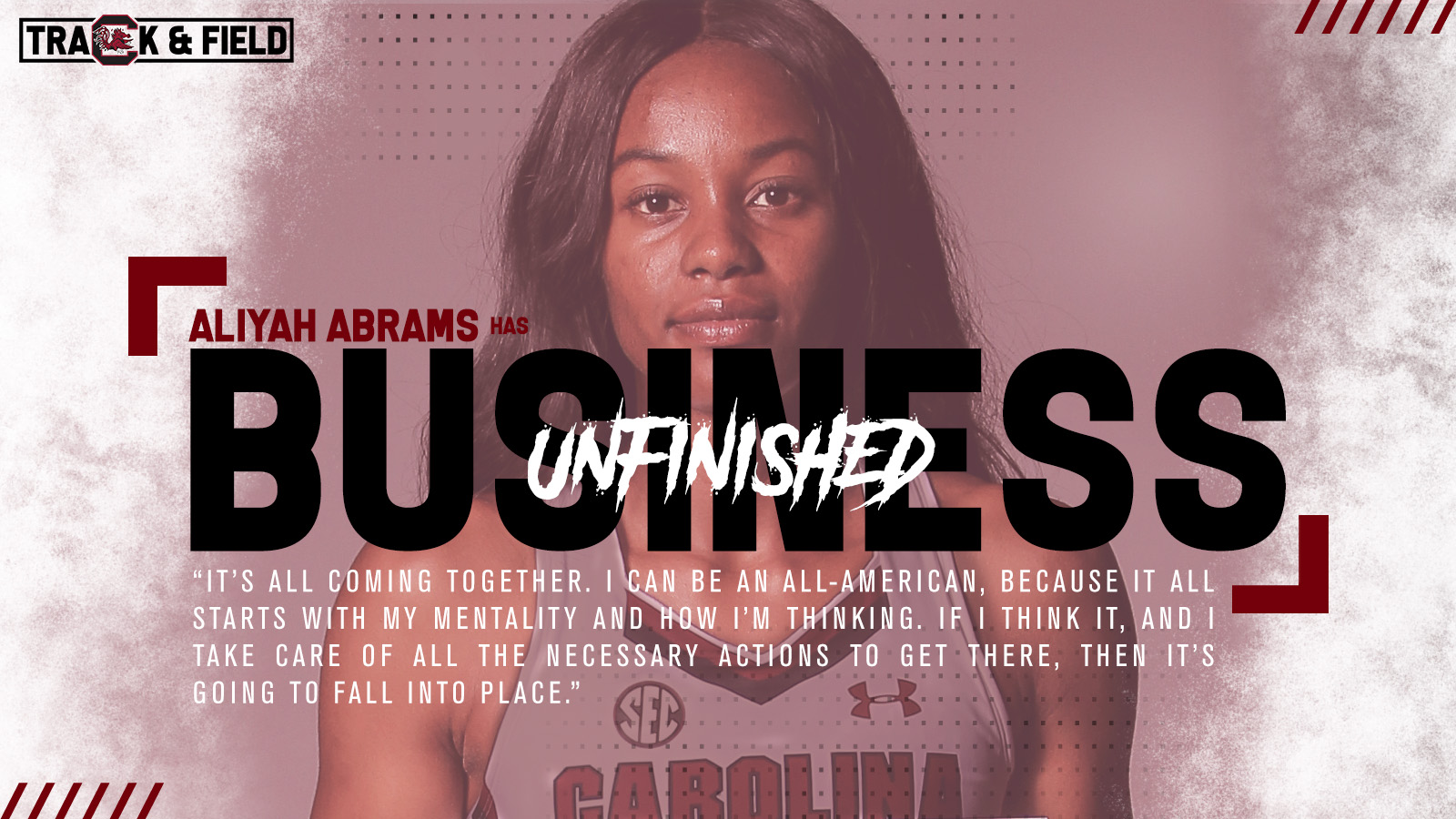 Unfinished Business: Abrams Wants More Than a Return to Nationals

Aliyah Abrams is a sprinter, but the redshirt junior has overcome some hurdles in her South Carolina career. Last year, Abrams successfully bounced back from injury to qualify for the 400m and the 4x400m relay at the NCAA Championships. Now she wants more.

“The good thing about last year was that I was able to get back to exactly where I left off before I was injured,” said Abrams, who is studying public health. “That being said, my goals are higher now, because I know what I am capable of. I know about overcoming injury and the mental hurdles to get back.

“I definitely want to make the finals of the NCAA Championships, and I also want to qualify for the World Championships, so I can represent my country.”

Abrams competed in the 2016 Olympics for Guyana, her parents’ homeland, and enjoys dual citizenship. While she has a long list of goals, becoming an All-American is what commands her attention now. She added that physical talent can take her far, but a strong mental game is a big key to success and where she wants to be.

“Being an All-American would mean a lot. It would show that my hard work has paid off,” Abrams said. “It’s all coming together. I can be an All-American, because it all starts with my mentality and how I’m thinking. If I think it, and I take care of all the necessary actions to get there, then it’s going to fall into place.

“Mentality plays a big role. Every time you line up, you can have a million things going through your head. That can affect how you run for that particular race. If that affects your race in regionals, then you’re not going to make it to nationals. You have to make sure your mental approach is always there. I’m training every day. I’m going to be physically ready all the time. My mental game has to be more in line.”

“I’m good with getting through pressure situations.”
– Aliyah  Abrams


Being healthy has a lot to do with a positive mindset, and Abrams knows she can’t allow any hiccups along the way bring doubts into her mind.

“It’s so easy to slip into (a negative mindset), especially when the injury is a long process,” Abrams said. “I had a small injury during the season that I was able to get through. You just have to keep it positive. You can’t think about what you’re missing. You have to think about working to get through it.”

Abrams’ collegiate career got off to a quick start in 2016 when she ran the fastest 400m time of any freshman in the country, and she earned Outdoor All-American honors as part of the bronze medal-winning team in the 4x400m relay at the NCAA Championships.  An ankle injury forced her to miss the outdoor season the following year, but she bounced back last year to qualify for nationals in both of her events. Now a veteran with a wealth of collegiate and international experience, Abrams has become a leader for Carolina’s 400m crew, which includes fellow 2018 NCAA qualifiers Stephanie Davis and Tatyana Mills.

“It starts with my training group. The girls are really motivated this year,” Abrams said. “The group of girls I train with all have similar goals, so we push each other. We work through adversity. We focus on our goals. Last year, the season was up and down for me, but knowing that I got there allows me to trust in my ability.

“The biggest key is my execution in the race. I’m good with getting through pressure situations. I find that when I execute my race strategy exactly as I’m supposed to, then the results are great for me. I have to run the right race.”

Abrams has been a sprinter since she was 11 years old. No matter how many times she circles the track, it’s still a thrill, and the ultimate thrill for her this year would be to stand at the podium at the NCAA Championships.

“It would mean a lot to be on the podium. It would mean that I was one of the best in the nation. That would feel good. It means that the goals I set out to meet, I have achieved.”