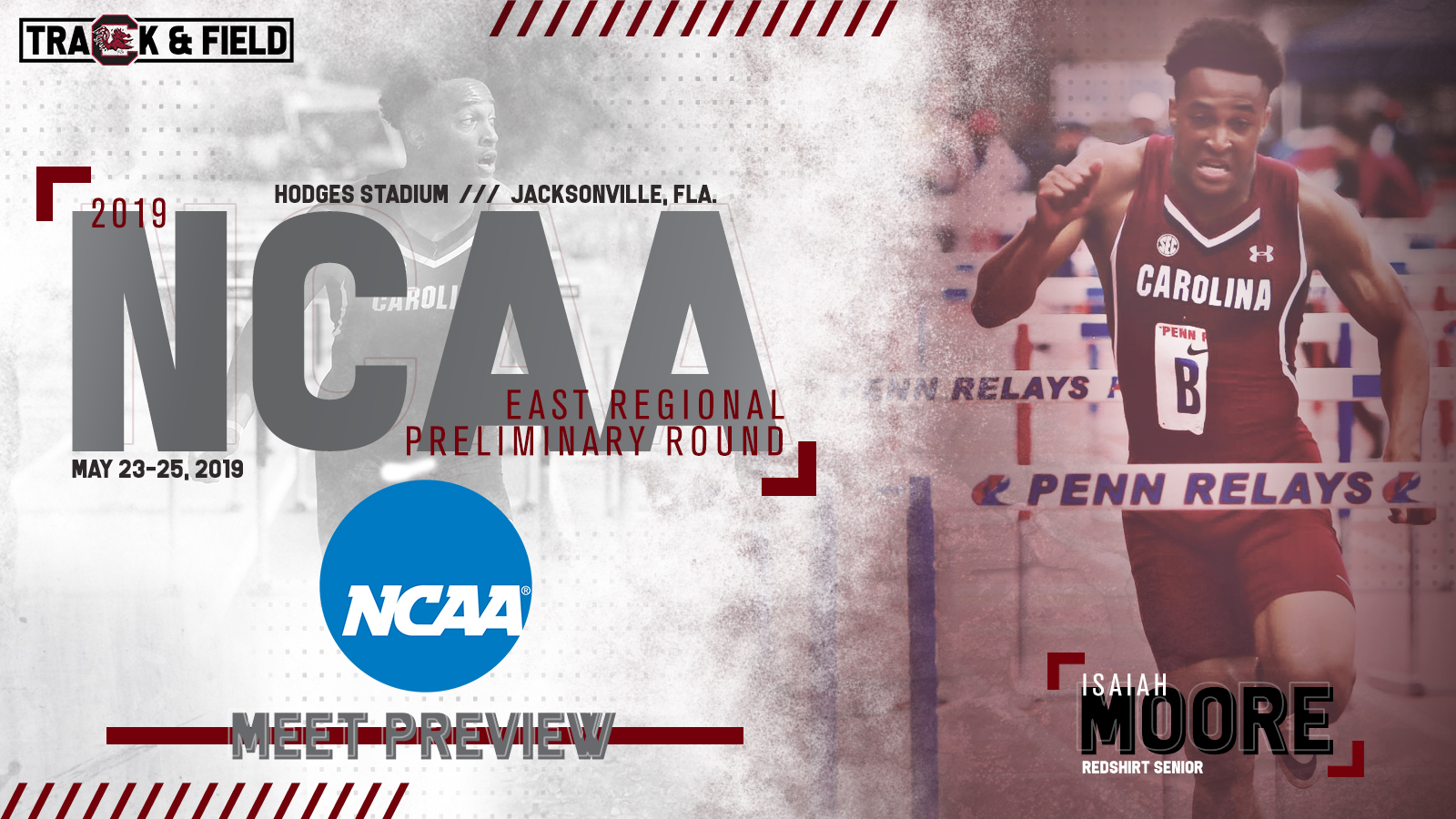 COLUMBIA, S.C. — The race for national titles begins this week for the University of South Carolina track & field program as the Gamecocks head to Jacksonville, Fla., for the NCAA East Regional Preliminary Round. The University of North Florida hosts the meet, which runs May 23-25 at Hodges Stadium.

The Gamecocks will send 22 individual entries and three relay squads to the East Regional. A complete list of the Gamecocks headed to Jacksonville can be found at the bottom of the page.

In order to qualify for the meet, student-athletes must rank inside of the region’s top-48 in an individual event or top-24 in a relay after scratches. Once in Jacksonville, the top-12 finishers in both individual and relay competitions will qualify for the NCAA Championships, to be held June 5-8 in Austin, Texas.

WATCH THE GAMECOCKS LIVE ON FLOTRACK

South Carolina fans can watch their favorite Gamecocks in the quest for NCAA Championships bid live on FloTrack, which will stream all three days of the NCAA East Regional meet for the second season in a row. Subscriptions begin at $12.49 per month, and fans can subscribe to FloTrack by clicking here.

“That’s what we’ve been talking about all week long – advancing into the top 12. We’ve got to keep the nerves down, because our kids are all capable of being one of the 12 best finishers at this meet. Of course, we’d like to be in the top six or the top three; that gives you a better opportunity once you do get to nationals, but first, make sure you advance and are in the top 12 in the East so that you can go against the top 12 in the West.”- Head Coach Curtis Frye 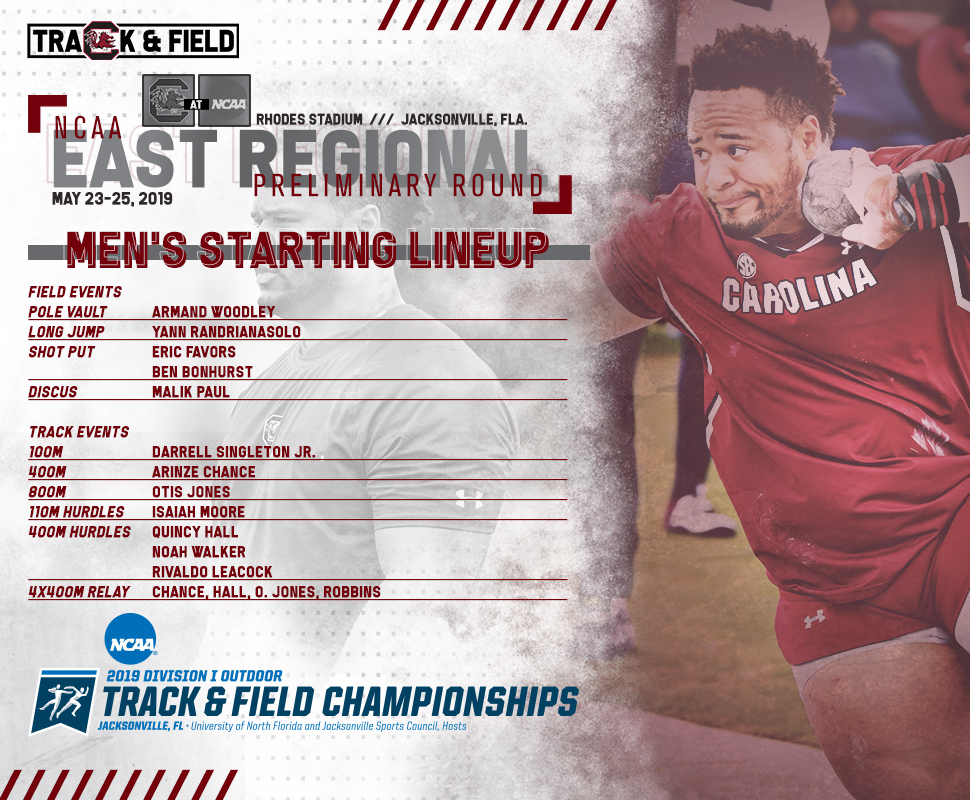 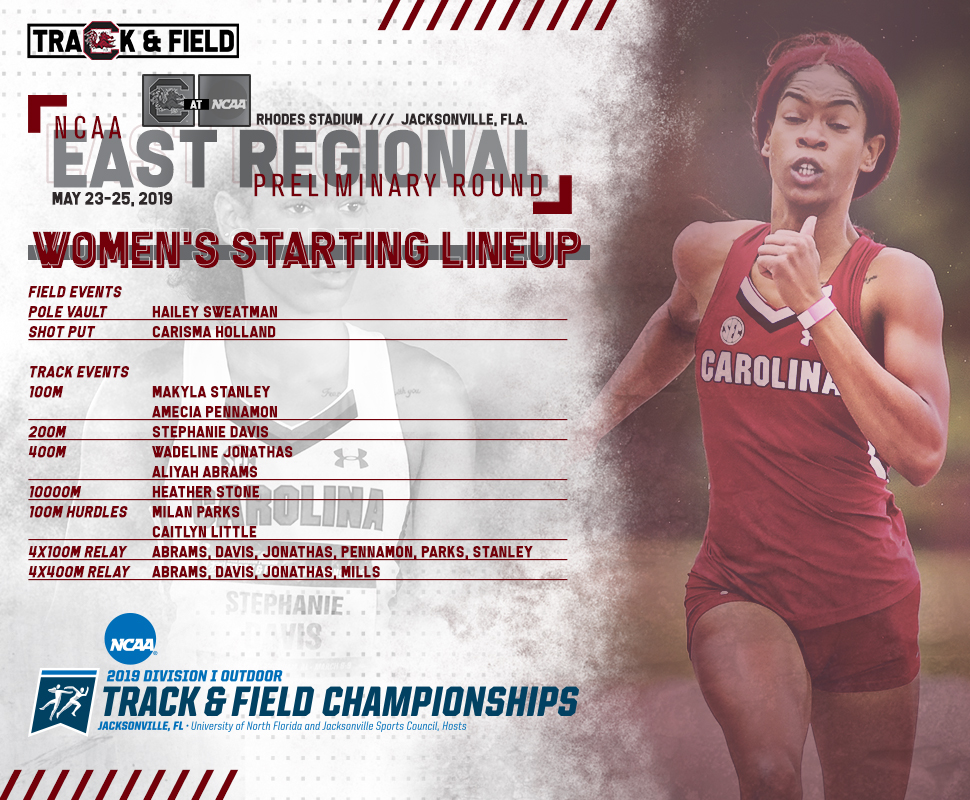 Carolina qualified eight entries last year at the NCAA East Regional in Tampa, Fla., sending six individuals and two relay squads through to the national meet. Among Gamecocks making the trip to Jacksonville this week, Aliyah Abrams (women’s 400m) and Yann Randrianasolo (men’s long jump) are aiming for repeat bids to nationals. Abrams will be looking for her third trip to the NCAA Outdoor Championships this week after qualifying in both 2016 and 2018. Randrianasolo will attempt to qualify for the NCAA outdoor meet for the second-straight season, while Armand Woodley (men’s pole vault) is also in the hunt for a second nationals bid after qualifying as a sophomore in 2017.

South Carolina sent both its women’s 4x100m and 4x400m relay teams to the NCAA Championships last season. Three members of the 4×1 group (Stephanie Davis, Milan Parks and Makyla Stanley) are expected to be in the lineup this week, as will three members of the mile relay (Abrams, Davis and Tatyana Mills).

Junior Quincy Hall won the 400m at the 2019 SEC Championships, held May 9-11 in Fayetteville, Ark., The junior is the first Gamecock in history to win the indoor and outdoor men’s 400m SEC titles in the same season, and the first Gamecock to win any SEC men’s title since 2010.

Though she finished just off the medal stand, sophomore Heather Stone’s effort in the women’s 10000m was another high point of the meet for Carolina. Stone finished fourth, the best finish by a Gamecock in the event since Tanya Povey won the SEC title in 1998, and the first scoring result by any Carolina athlete in the women’s 10K since 2000. Her time of 34:20.22 ranks second in Carolina history.

In addition to their six All-SEC performances, Carolina placed a student-athlete on the SEC All-Freshman team in the women’s shot put for the third-straight season. Carisma Holland was the top freshman finisher in the event, finishing in ninth place.

Overall, Carolina finished 10th on the men’s side and 13th in the women’s team competition.

QUARLES TO COACH FOR TEAM USA AT IAAF WORLD CHAMPIONSHIPS

University of South Carolina assistant head coach Delethea Quarles was named to the Team USA coaching staff for this summer’s IAAF World Championships, the USATF announced on April 18. Quarles will serve as the assistant coach for women’s jumps and combined events under head coach Bonnie Edmonson of Trinity College.

Carolina’s three Championship of America titles were the most for the program at one Penn Relays since 2007. Aliyah Abrams, Stephanie Davis and Wadeline Jonathas each hoisted two wagon wheels, as all three Gamecocks were part of the 4×2 and 4×4 titles.

In the women’s 3K, Stone led wire-to-wire, posting the fifth-best time in Carolina history, 9:49.83. Holland added the best discus performance of her career. Her winning throw of 48.01m (157-6) is the 10th-best mark in Carolina history.

April 13, 2019, will go down in the history books as one of the finest days in the history of the University of South Carolina track & field team, as head coach Curtis Frye’s program made a global impact on the track and retired the jerseys of two all-time legends at the Gamecock Invitational. Two Gamecocks surged to the top of the NCAA leaderboard and assumed world leads in their events, and Carolina alumni Miki Barber and Terrence Trammell became the first college track & field athletes in program history to have their jerseys retired.

Hall was once again incredible in his Cregger Track debut, setting a new South Carolina record for the sixth time this season. This time it came in the 400m, where he ran 44.53, which at the time was the best mark in the world this year. His run broke the previous Carolina record of 44.57, set in 2003 by Otis Harris.

Moore posted a massive time in the 110m hurdles prelims, running a wind-legal 13.39, which was a personal best. But the senior wasn’t finished; he came back in the final to run a wind-aided 13.25, which ranked as the best all-conditions time in the world for two weeks. It’s also the third-best time in school history.

Prior to the start of the prime-time window, South Carolina officially retired the jerseys of Barber (1999-2003) and Trammell (1998-2000). The duo combined for 11 NCAA event championships and 33 All-America finishes. They were each named 2000 USTFCCCA Athlete of the Year as the top collegians in track & field, and they each represented the United States of America at the Olympic level, with Trammell earning a pair of silver medals in the 110m hurdles.

South Carolina won nine events April 5-6 in its annual trip to the Spec Towns Invitational in Athens, Ga. Two Gamecocks were victorious on the opening day, as Quincy Hall won the 400m hurdles and Yann Randrianasolo was the Lewis Gainey Long Jump winner for the second season in a row. The Gamecocks also got a pair of new program top-10 times in the 1500m, from Anna Kathryn Stoddard (4:31.59) and Maryah Nasir (4:32.46).

South Carolina made its annual trip to the Florida Relays and left Gainesville with several strong results. Chief among the efforts was Carolina’s run in the women’s 4x400m relay. Stephanie Davis, Aliyah Abrams, Tatyana Mills and Wadeline Jonathas were together for the first time since their national title-winning run at the NCAA Indoor Championships, and the quartet somehow managed to outdo themselves again. Jonathas ran a furious closing stretch to overtake Florida and Alabama on the final straightaway, and the team’s time of 3:27.53 still leads the NCAA heading into regionals.

The Gamecocks were in complete control of the Buccaneer Invitational, held March 22-23 in Charleston, S.C. South Carolina won 18 event titles at the meet, by far the most at the seven-team event.

South Carolina opened its outdoor campaign March 15-16 at the Black and Gold Challenge in Orlando, Fla. Despite fielding a limited group of entries, the Gamecocks led the meet with 11 event victories.

The Gamecocks notched three program top-10 marks in Orlando as part of their 11 victories. Anna Kathryn Stoddard won the women’s 1500m with a time of 4:34.23, which at the time was the ninth-best mark in Carolina history, and long jump All-American Yann Randrianasolo competed in the men’s triple jump, where his mark of 15.61m ranks seventh on the records list. The women’s 4x800m crew of Allie Mueller, Maryah Nasir, Sierra Biber and Macie Kavanaugh laid down the ninth-best time in Carolina history, 9:04.39.

The Gamecocks enter the outdoor season on the heels of the program’s best NCAA Indoor Championships in over a decade. The Carolina women finished tied for seventh, their first NCAA top-10 finish since 2007, while the Gamecock men tied for 20th, their best result at the national indoor meet since 2010.

The highlight of the meet was Carolina’s national championship in the women’s 4x400m relay. Stephanie Davis, Aliyah Abrams, Tatyana Mills and Wadeline Jonathas ran 3:30.76 to edge Texas A&M (3:30.85) and Arkansas (3:30.86) for the crown. It’s the 47th NCAA event championship in Gamecock history and the first since 2015. It’s also the program’s seventh women’s 4x400m relay NCAA title and the first since 2007.

Overall, Carolina finished 10th in the men’s competition and 12th on the women’s side.

On the men’s side, Isaiah Moore and Yann Randrianasolo each head to Jacksonville with outdoor All-America results under their belts. Moore was a first-team finisher in 2017 after taking eighth in the 100m hurdles.

Following the week in Jacksonville, there is just one meet left in the 2019 collegiate track & field season. The Gamecocks who qualify will compete at the NCAA Outdoor Championships, to be held June 5-8 in Austin, Texas.