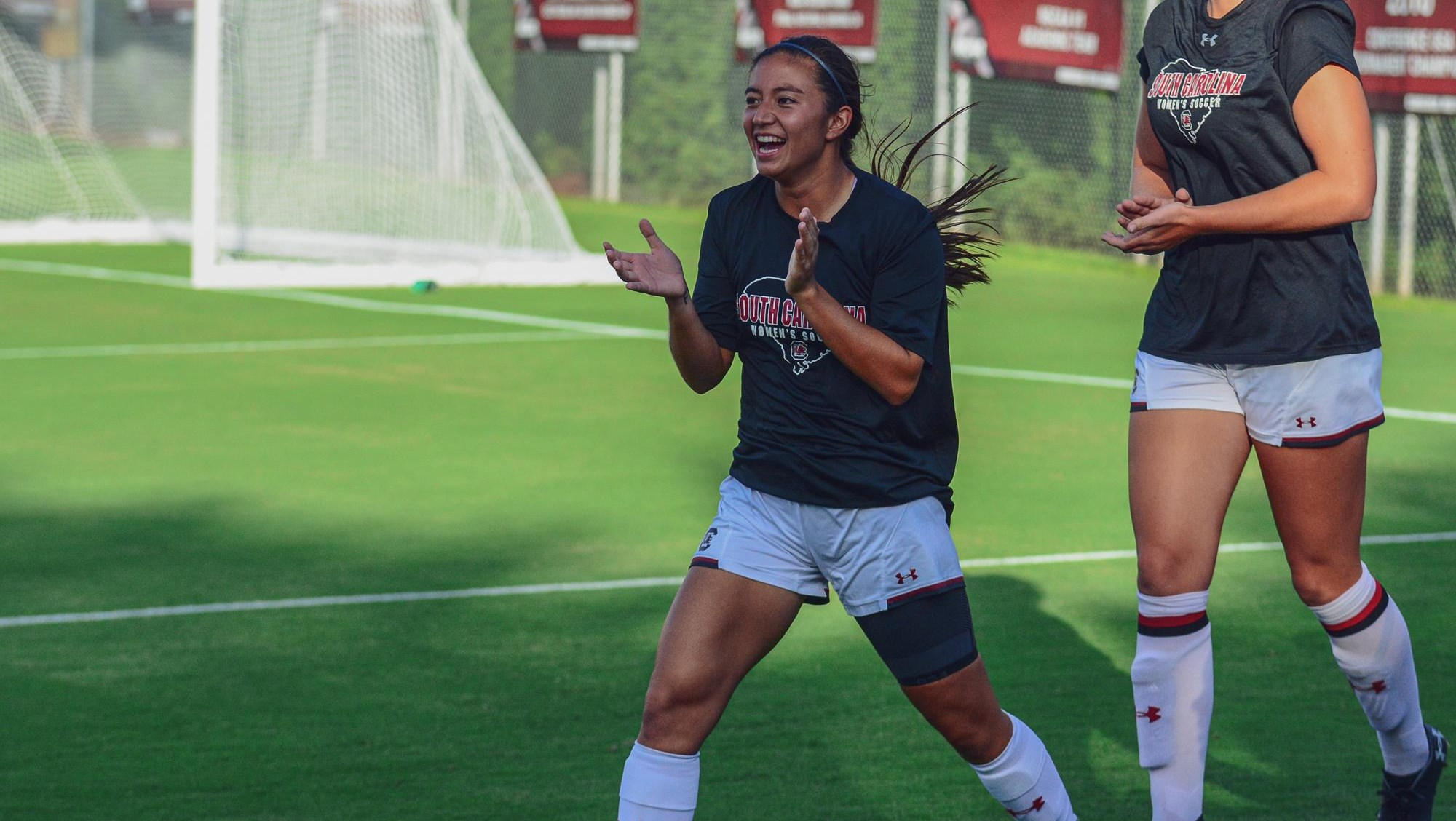 After a scoreless first half, Chang connected on the go-ahead goal in the 64th minute off a pass from senior Elexa Bahr. Chang looked to strike all afternoon, finishing with a team-high six shots in the victory.

“This weekend was a great test for us on the road,” South Carolina head coach Shelley Smith said. “It showed how we had to adapt to playing different styles. To come out with these two wins is definitely a great accomplishment and I’m really proud of this team.”

“I’m really happy with how we were able to solve a team that put a lot of numbers behind the ball,” Smith said. “It made it difficult to play and I was happy to see the team come out of halftime and figure out a way. Having the ball for the majority of the match is great, but you have to find ways to put it in the back of the net. I thought the team adjusted and did some things very well in the second half and solve the pressure.”

PATTEN RETURNS TO LEAD GAMECOCKS TO WIN OVER PURDUE
Fueled by a stingy back line, the Gamecocks shut out Purdue 2-0 on the road on Sept. 6 to begin the Boilermaker Challenge Cup with goals from Anna Patten and Lauren Chang.

After missing two matches while playing with the England Senior National Team, Patten returned to the starting lineup and slotted a penalty kick in for her first career goal as a Gamecock. Lauren Chang added her first goal of her season, with the assist from sophomore Jyllissa Harris on a set piece.

“We did a great job at handling a tough environment against a great team on the road,” Smith said. “We were able to play some more players that did a great job when they came in and did great at keeping the pressure on Purdue.”

“It was difficult to break us down,” Smith said about the defense. “We did a great job at covering for each other. Overall, they did a wonderful job at their one-on-one defending, and when they had any chances, there was always someone there to stop it, including Mikayla [Krzeczowski].”

ABUNDANT EXPERIENCE
Carolina’s starting defense consists of two juniors and three seniors that have combined for 238 collegiate starts. Krzeczowski (70), Tatumn Milazzo (47) and Sarah Eskew (35) have made all of their starts at South Carolina. Center backs Grace Fisk (58) and Patten (28) have made starts at previous schools on top of their time at South Carolina.

SCOUTING NOTRE DAME
Carolina will attempt to take out its second undefeated opponent when Notre Dame (6-0-0) comes to Columbia. The Fighting Irish have allowed just one goal this season while scoring 13. Notre Dame is led by sophomore Luisa Delgado who has scored two goals on 11 shots and has three assists. In goal, sophomore Mattie Interian and senior Brooke Littman have both played three matches, 270 minutes each, with Littman allowing the lone goal this season. Notre Dame has taken out Northwestern (4-0) and Michigan (1-0) on the way to a perfect start to the season. This is the first time the Gamecocks will host the Fighting Irish at Stone Stadium.

SCOUTING CLEMSON
The Tigers enter with similar results to what Carolina has experienced this season. They have scored 14 goals while allowing just two, with goalkeeper Sandy MacIver, a key member of their defensive, missing a few matches due to time with the England Senior National Team. Offensively Clemson is led by Mariana Speckmaier who has scored five goals this season on 15 shots. Maliah Morris will also be a factor on the offensive end with a team-high 21 shots this season, but just one goal. Clemson’s most notable results are wins over Utah and at Nebraska and a 1-1 tie at home against Oregon. Carolina has defeated Clemson each of the past three meetings, including last year’s 1-0 victory at Stone Stadium.

PATTEN EARNS SEC AND NATIONAL HONORS
Patten earned her first career SEC Defensive Player of the Week honor, the league office announced on Sept. 9. After returning from training camp with the England Senior National Team, Patten scored the game-winning goal vs. Purdue and played all 180 minutes of the Boilermaker Challenge Cup on her way to being named the Defensive MVP of the tournament. Patten also was named to TopDrawerSoccer.com’s Team of the Week after her performance in West Lafayette, Ind.

WEEKLY GREATNESS
Coming in at No. 7 in the latest United Soccer Coaches Poll, the University of South Carolina has now been in the top 25 for 40-straight weeks dating back to 2016. The streak is the longest streak in program history since the program began keeping track in 2007.

THE GRAVEYARD FACTOR
With yet another pair of home victories at Stone Stadium, also known as the Graveyard, the Gamecocks are now 45-5-1 in their past 51 home matches. Carolina has won 21-straight non-conference matches at home, a streak that dates back to 2014. Since the 2015 season, the Gamecocks have only lost one home match during the regular season.

UP NEXT
With the conclusion of the non-conference season, the Gamecocks will shift their focus to the always tough SEC schedule. South Carolina opens with Georgia (2-3-1) at Stone Stadium at 7 p.m. on Sept. 20.

QUICK NOTES
– South Carolina scored four goals in the first half against Jacksonville (Aug. 28) the most goals in a half since Nov. 11, 2016 vs. Alabama State in the NCAA Tournament
– South Carolina is one of 21 schools in NCAA Division I undefeated through the first three weeks of the season
– The Gamecocks played in front of the ninth-largest crowd (4,017) in program history in the 3-0 victory over William and Mary (Aug. 25)
– Senior forward Elexa Bahr’s four assists are enough for the 14th most in the country and her three game-winning goals is the fourth most in the country
– Carolina’s defense has combined for 238 career starts, highlighted by senior goalkeeper Mikayla Krzeczowski’s 70 starts