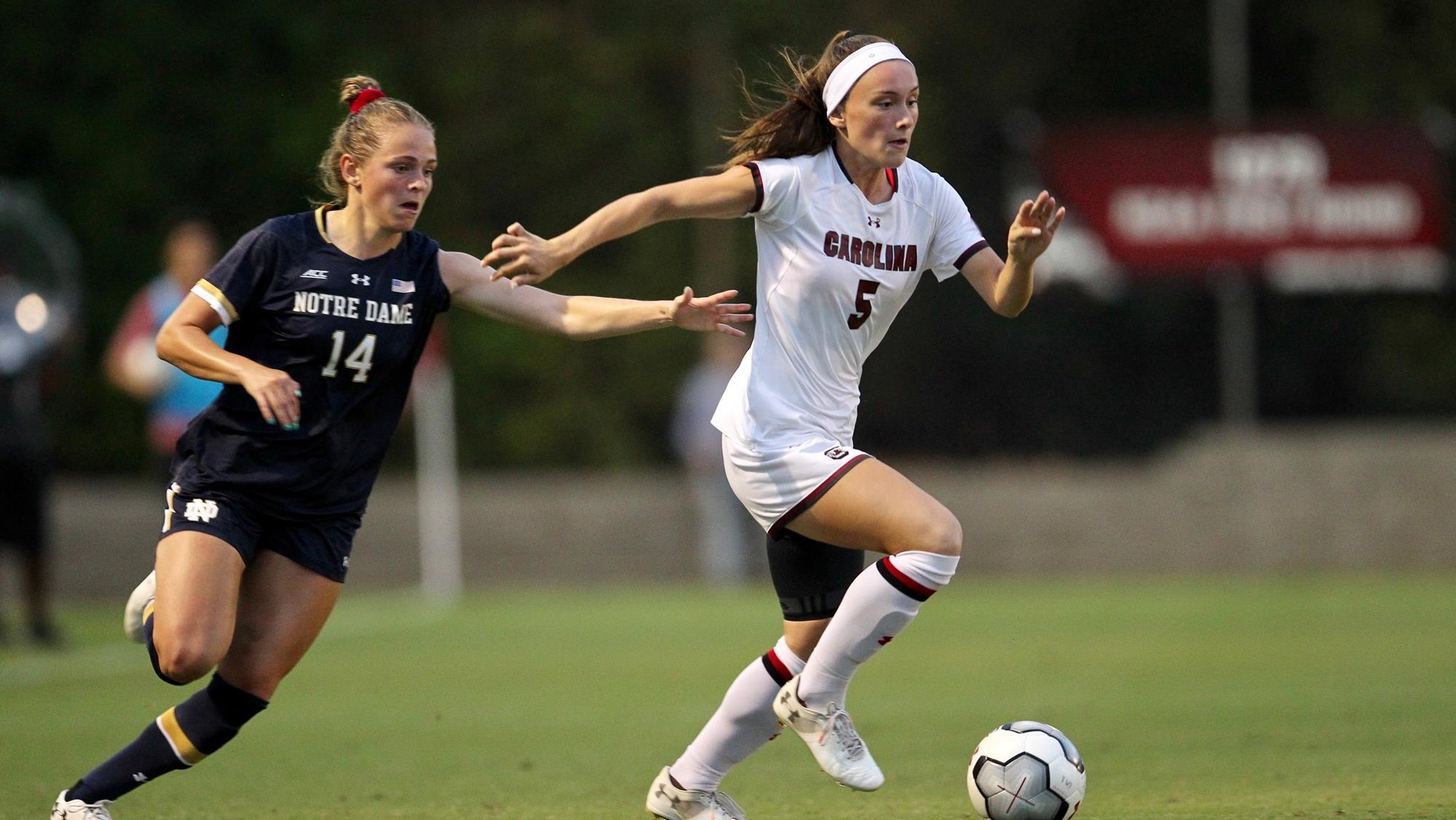 COLUMBIA, S.C. – After a 35-minute first-half rain delay, it was junior forward Luciana Zullo’s second half gamewinner that proved to be the difference for No. 7 South Carolina women’s soccer (6-0-0) to earn a 2-1 victory over Notre Dame (6-1-0) at Stone Stadium on Thursday night.

Carolina built a 2-0 lead off a first-half penalty kick from junior defender Anna Patten combined with Zullo’s goal in the second half. Notre Dame made it interesting with a goal in the 88th minute to cut the score to 2-1 in the final 99 seconds. South Carolina was able to keep Notre Dame away in the final moments, continuing its non-conference dominance at home.

“Tonight was huge for our program,” South Carolina head coach Shelley Smith said. “We continually try to prove that we deserve the ranking we’ve earned. We are representing the SEC and we are proud of our play against a team like Notre Dame. [Getting this win] is just a great feeling.”

It was not until nearly halftime when the Gamecocks broke the scoreless tie with their second penalty kick of the season. Riley Tanner’s cross into the box led to the penalty kick opportunity after a Notre Dame defender’s outstretched arm hit the ball while in the box. For the second time of the season, Patten stepped up and delivered in the clutch moment to put Carolina on top 1-0.

It was the defense that kept Notre Dame at bay down the stretch, allowing just three shots in the last 52 minutes. With the defense keeping the Irish on lock, it was the offense that helped extend the lead. A scramble in the box, led by Claire Griffiths, found the foot of Bianca Galassini before Zullo buried her second goal of the season to put Carolina in great position in the 80th minute.

Notre Dame didn’t back down, the Fighting Irish finally found the back of the net with 1:34 remaining in the match. The goal is just the second goal given up by Carolina this season, and the first given up in the second half. It also snapped a streak of 518 minutes without giving up a goal.

The 6-0-0 start is the best start since South Carolina started 11-0-0 in 2009, a year in which Carolina finished 20-4-2 and reached the Round of 16. Carolina is now 2-0-0 against Notre Dame, and the win is also the first time the Gamecocks were able to play, and defeat, the Fighting Irish at Stone Stadium.

“Notre Dame is always one of the top teams you’ll find and face in the country,” Smith said. “Last time we were able to go there and beat them at their place and then for them to come here and play us again, it’s a great accomplishment. We have all the respect in the world for that program.”

Rival Clemson (5-0-1) is Carolina’s next challenge, with the match scheduled for Sept. 15, at 6 p.m. on the ACC Network. The Gamecocks have won the past three meetings with the Tigers.