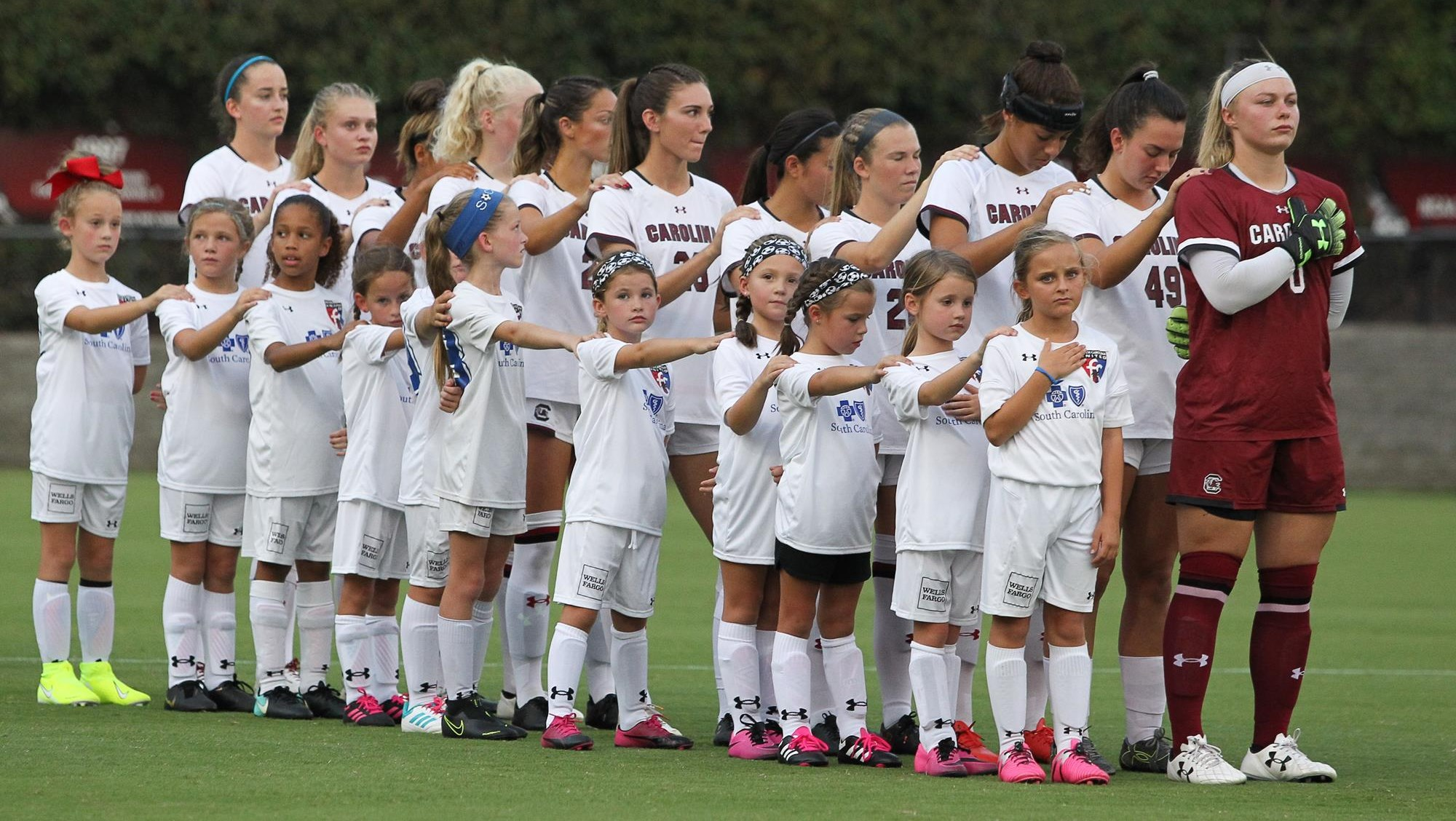 
COLUMBIA, S.C. – No. 9 South Carolina women’s soccer will look to bounce back when Georgia (3-3-1) comes to Stone Stadium on Sept. 20 at 7 p.m. to begin SEC play with the match being streamed on SEC Network +.

CAROLINA GOES 1-1-0 TO FINISH NON-CONFERENCE SEASON
Highlighted by Luciana Zullo’s second half gamewinner, then No. 7 South Carolina women’s soccer earned a 2-1 victory over Notre Dame (6-1-0) at Stone Stadium on Sept. 12. Carolina built a 2-0 lead off a first-half penalty kick from junior defender Anna Patten combined with Zullo’s goal in the second half. Notre Dame made it interesting with a goal in the 88th minute to cut the score to 2-1 in the final 99 seconds. South Carolina was able to keep Notre Dame away in the final moments, continuing its non-conference dominance at home.

“[This win] was huge for our program,” South Carolina head coach Shelley Smith said. “We continually try to prove that we deserve the ranking we’ve earned. We are representing the SEC and we are proud of our play against a team like Notre Dame. [Getting this win] is just a great feeling.”

“I thought we didn’t match [Clemson’s] intensity at times,” South Carolina head coach Shelley Smith said. “We came out early and played well and showed what we could do. We didn’t solve some things as the game went on.”

GAMECOCK NATIONAL STATS
Nationally, the Gamecocks rank best in goals against average through the non-conference season with a team mark of .500. That ranks the Gamecocks 19th in the country and third in the conference. Individually, senior forward Elexa Bahr is tied for ninth in the NCAA with three game-winning goals, just one behind the most in the country. South Carolina is also second in the country in average attendance through the non-conference season with an average of 3,190 fans at each home match.

ABUNDANT EXPERIENCE
Carolina’s starting defense consists of two juniors and three seniors that have combined for 248 collegiate starts. Krzeczowski (72), Tatumn Milazzo (49) and Sarah Eskew (37) have made all of their starts at South Carolina. Center backs Grace Fisk (60) and Anna Patten (30) have made starts at previous schools on top of their time at South Carolina.

SCOUTING GEORGIA
The Gamecocks have taken on Georgia in every year since South Carolina created the women’s soccer program in 1995. The Bulldogs ended the non-conference with a 3-3-1 record, with wins over Binghamton, Maryland and Georgia State. Offensively Georgia is led by Chloe Chapman, who has scored three goals this season despite not starting in any matches. Sophomore goalkeeper Emory Wegener has been the Bulldogs go-to in-between the pipes this season. She’s been in goal for two of Georgia’s three wins this season and has made 18 saves to go with her 1.00 goals against average in 450 minutes of action.

PATTEN EARNS SEC AND NATIONAL HONORS
Junior defender Anna Patten earned her first career SEC Defensive Player of the Week honor, the league office announced on Sept. 9. After returning from training camp with the England Senior National Team, Patten scored the game-winning goal vs. Purdue and played all 180 minutes of the Boilermaker Challenge Cup on her way to being named the Defensive MVP of the tournament. Patten also was named to TopDrawerSoccer.com’s Team of the Week after her performance in West Lafayette, Ind.

WEEKLY GREATNESS
Coming in at No. 9 in the latest United Soccer Coaches Poll, the University of South Carolina has now been in the top 25 for 41-straight weeks dating back to 2016. The streak is the longest streak in program history since the program began keeping track in 2007.

NON-CONFERENCE SUCCESS
Carolina has won 22-straight non-conference matches at home, a streak that dates back to 2014. The Gamecocks went 3-0-0 at home during the 2019 non-conference season at Stone Stadium defeating NC State, William and Mary and Notre Dame.

UP NEXT
Carolina will begin its first full weekend of SEC action, starting with Alabama on Sept. 26, on the road. The Gamecocks will then return to Stone Stadium on Sept. 29 to take on No. 16 Arkansas in a top-25 showdown. Both matches can be seen on SEC Network +.

QUICK NOTES
– South Carolina is second in the country in average attendance through the non-conference season with an average of 3,190 fans at each home match
– Carolina has won two of the first four SEC Defensive Player of the Week honors with Tatumn Milazzo (Week 1) and Anna Patten (Week 3) each earning one honor so far
– The Gamecocks played in front of the ninth-largest crowd (4,017) in program history in the 3-0 victory over William and Mary (Aug. 25)
– Senior forward Elexa Bahr’s three game-winning goals is good enough for ninth most in the country
– Carolina’s defense has combined for 248 career starts, highlighted by senior goalkeeper Mikayla Krzeczowski’s 72 starts