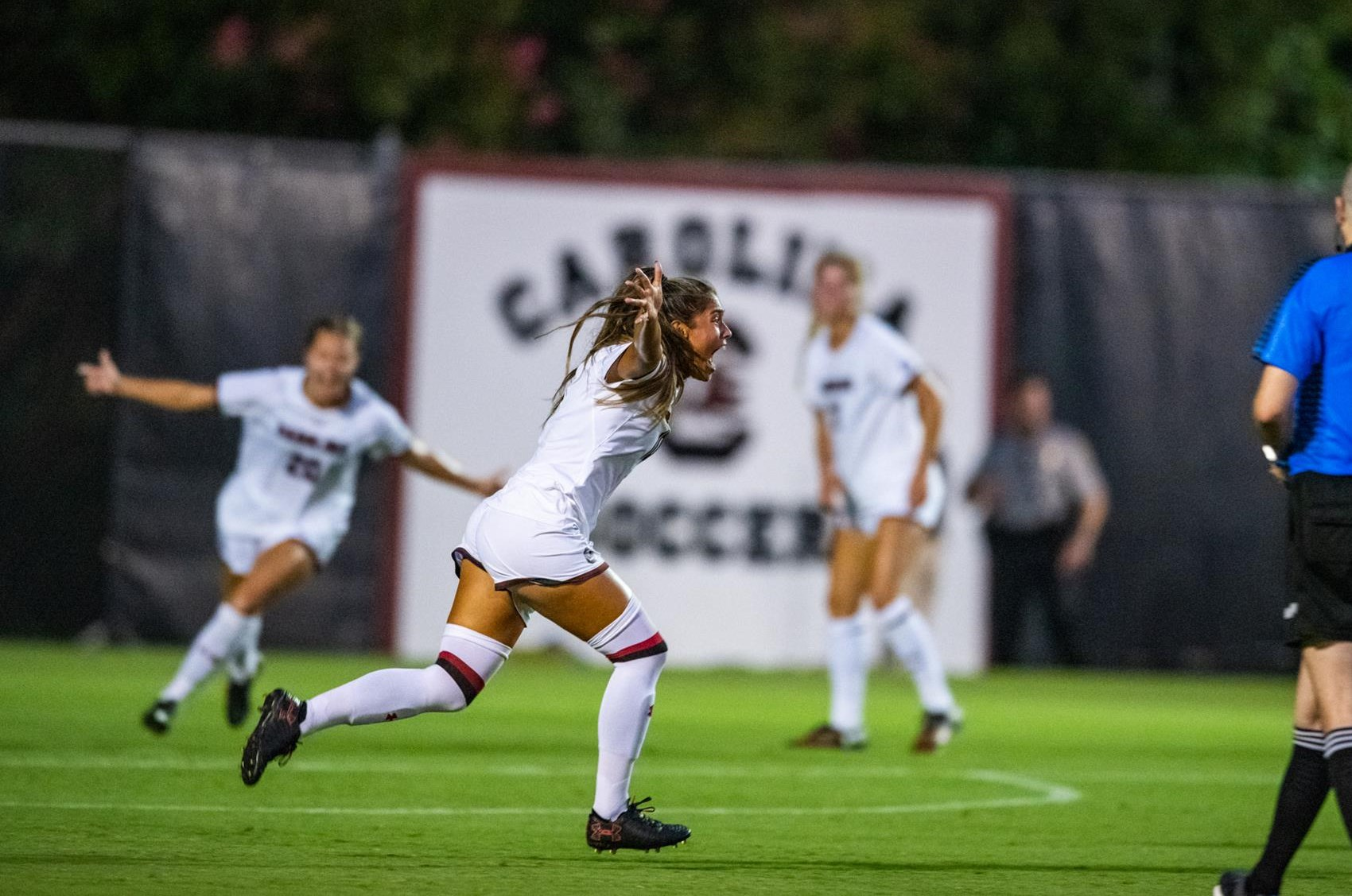 Gamecocks to Travel to Alabama, Host No. 13 Arkansas

Sophomore forward Riley Tanner notched her second career game-winning goal with her tally in the 36th minute. Junior midfielder Lauren Chang added a pair of insurance goals to help the Gamecocks take out the Bulldogs for the second-straight year.

“I was definitely pleased with how we came out tonight,” South Carolina head coach Shelley Smith said. “It’s very important to get that first SEC win, and we need to win our home matches. You always want to start off on the right foot in conference play.”

SCOUTING ALABAMA
In the 19 times the Gamecocks and the Crimson Tide have met since 1997, the Gamecocks own a 14-4-1 advantage in the series. Carolina is unbeaten in the past five matches with Alabama, including wins each of the last two years. Alabama enters this year’s matchup with a 5-3-1 (0-1-0 SEC) record, already loggin more than half of its 2018 win total of eight. Forwards Riley Mattingly and Casey Wertz lead Alabama offensively this year, each with nine points. Goalkeeper Alex Plavin has started in eight matches this season and holds a 0.75 goals against average, allowing six goals in her 718 minutes in goal.

SCOUTING ARKANSAS
No. 8 South Carolina will have a tough test when No. 13 Arkansas visits Stone Stadium on Sept. 29. Arkansas enters with a 7-1-1 (1-0-0 SEC) record, including a 2-0 win over then-No. 1 North Carolina on Sept. 15. The Razorbacks have a standout freshman in Anna Podojil, who has scored six goals and assisted on three more. Her 15 points leads the team followed by junior Parker Goins, who has scored three goals and added six assists. In goal it’s been Katie Lund, who has allowed just two goals in nine matches. She’s made 21 saves and has not allowed a goal in her last six matches.

CHANG WINS SEC OFFENSIVE PLAYER OF THE WEEK
Junior midfielder Lauren Chang earned her first career SEC Offensive Player of the Week honor, the league office announced on Sept. 23. Chang came off the bench to help lead the Gamecocks to a 3-0 win over Georgia in Carolina’s SEC opener. The multi-goal performance was the first time since Oct. 5, 2017, that a Gamecock scored more than one goal in a match.

“She led her team by finding the net twice against Georgia and topped it off with an outstanding strike for her second goal,” South Carolina head coach Shelley Smith said. “It was an impressive performance for her, and we’re happy to see she has earned SEC Player of the Week honors because of the impact she made on the field to help secure a win for the team.”

BOUNCE-BACK GAMECOCKS
Since the start of the 2016 season, the Gamecocks hold a record of 12-1-0 after a loss. Most recently, Carolina bounced back in a big way with a 3-0 win over Georgia after dropping its first match of 2019.

GAMECOCK NATIONAL STATS
Nationally, the Gamecocks are among the best in goals against average through five weeks of the season with a team mark of .429. That ranks the Gamecocks 13th in the country and third in the conference. Individually, senior forward Elexa Bahr is tied for 12th in the NCAA with three game-winning goals. South Carolina is second in the country in average attendance through the non-conference season with an average of 2,904 fans at each home match.

ABUNDANT EXPERIENCE
Carolina’s starting defense consists of two juniors and three seniors who have combined for 252 collegiate starts. Mikayla Krzeczowski (73), Tatumn Milazzo (49) and Sarah Eskew (38) have made all of their starts at South Carolina. Center backs Grace Fisk (61) and Anna Patten (31) have made starts at previous schools on top of their time at South Carolina.

WEEKLY GREATNESS
Coming in at No. 8 in the latest United Soccer Coaches Poll, South Carolina has now been in the top 25 for 42-straight weeks dating back to 2016. The streak is the longest since the program began keeping track in 2007.

UP NEXT
South Carolina will play just one match next week, a road match at Missouri. The Gamecocks will take on the Tigers on Oct. 4 at 8 p.m. ET on SEC Network +.

QUICK NOTES
– Since 2016, South Carolina is 12-1-0 after a loss which includes the Gamecocks’ bounce-back 3-0 win over Georgia
– Carolina has won three SEC Player of the Week honors with Tatumn Milazzo (Week 1) and Anna Patten (Week 3) and Lauren Chang (Week 5) each earning one honor so far
– Mikayla Krzeczowski’s 38 career shutouts has her tied for the 19th most in NCAA Division I history
– The Gamecocks have allowed just three goals this season, good enough for a 0.429 goals against average – the 13th best mark currently in NCAA Division I
– Carolina’s defense has combined for 252 career starts, highlighted by senior goalkeeper Mikayla Krzeczowski’s 73 starts (second most in program history by a goalkeeper)