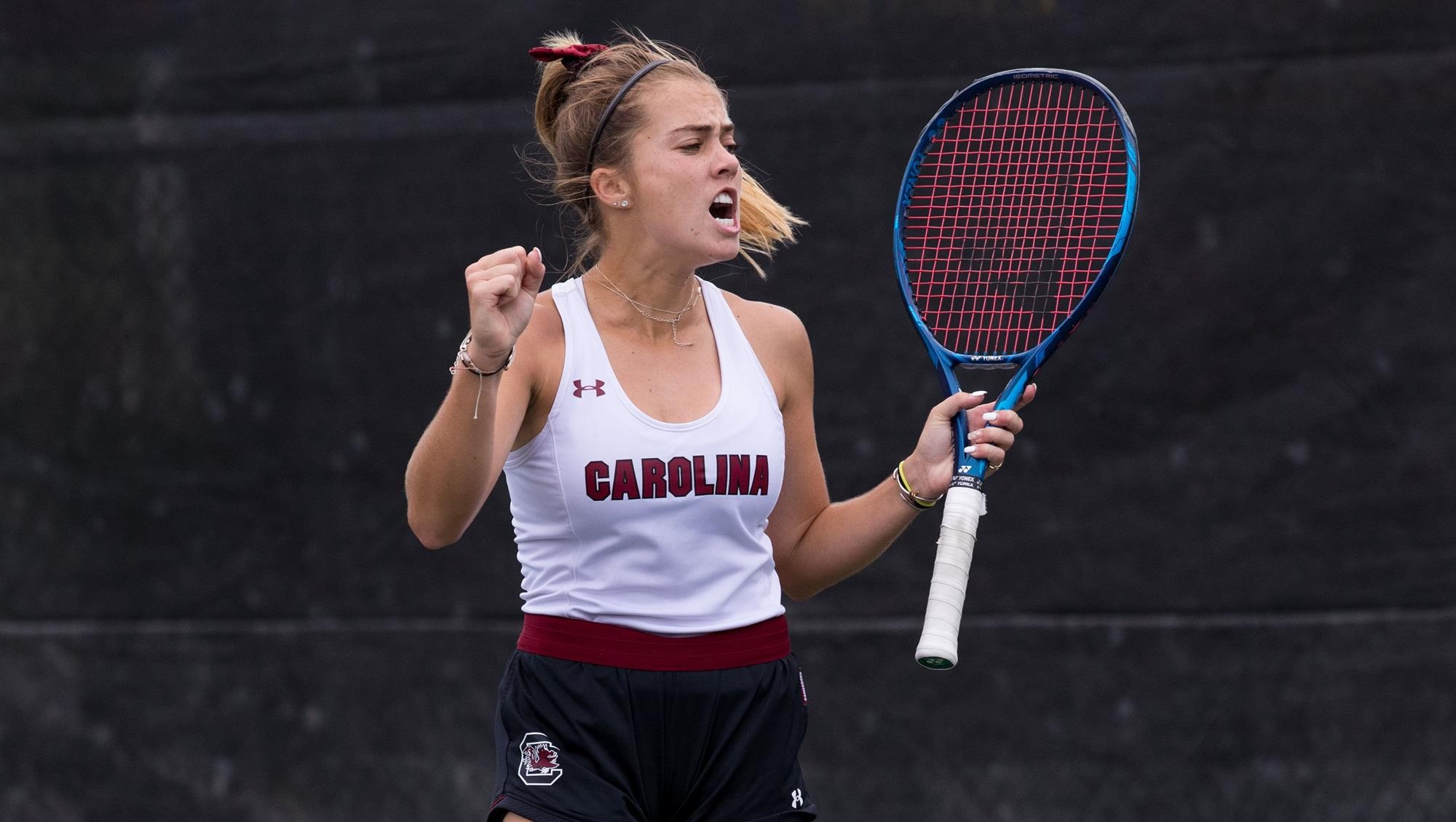 Newcomers Upset No. 2 Doubles Team on Day 1 of the Carolina Kickoff

COLUMBIA, S.C. – South Carolina finished day one of the Carolina Kickoff with six wins under its belt on Friday. Doubles pair Misa Malkin and Sarah Hamner upset the No. 2 pair in the nation, highlighting South Carolina’s opening day of its spring campaign.

In doubles, the Gamecocks played matches against Georgia Tech and Wake Forest and two Gamecock pairs notched their first wins of the spring against the Yellow Jackets. Allie Gretkowski and Kendall Couch went up 3-0 in their match against Rosie Gross Garcia and Gia Cohen of Georgia Tech. Jain and Marsh inched back to claim two games, but Gretkowski and Couch held them off to a 6-2 decision.

In the No. 1 spot, Misa Malkin and Sarah Hamner faced Carol Lee and Kate Sharabura in a closely contested match that went to 2-2. From there, they pulled ahead to notch the 6-3 win for the Gamecocks.

Gamecock duo Elise Mills and Kendall Couch also earned a win against their Wake Forest opponents. They came back from an 0-2 deficit to top Anna Campana and Casie Wooten in a 6-3 decision to claim the fourth doubles win for South Carolina.

In singles, freshmen continued to gain wins for the Gamecocks. No. 2 Hamner faced No. 38 Kylie Bilchev of Georgia Tech for her first singles match this spring. Hamner quickly went up 3-0 in the first set and continued to fend off Bilchev to earn the 6-2 first set win. Bilchev fought back in the second set which reached 3-3. From there, Hamner pulled ahead to solidify her win in a 6-4 decision and claimed her first singles win as the No. 2 player in the nation.

Malkin took on Georgia Tech’s Ruth Marsh in the No. 4 singles spot. The first set was closely contested, leading to four-games-all until Malkin pulled ahead to win the first set 6-4. From there, she settled in and went up 5-1 in the second set. Marsh closed the gap to 5-3 but Malkin clinched her victory with a 6-3 second set win.

The Gamecocks are back in action Saturday for the final day of the Carolina Kickoff at the Carolina Indoor Tennis Center. The tournament will end early due to the inclement weather forecasted for Sunday. Saturday’s play will begin at 9 a.m. and will feature two rounds of singles and doubles.