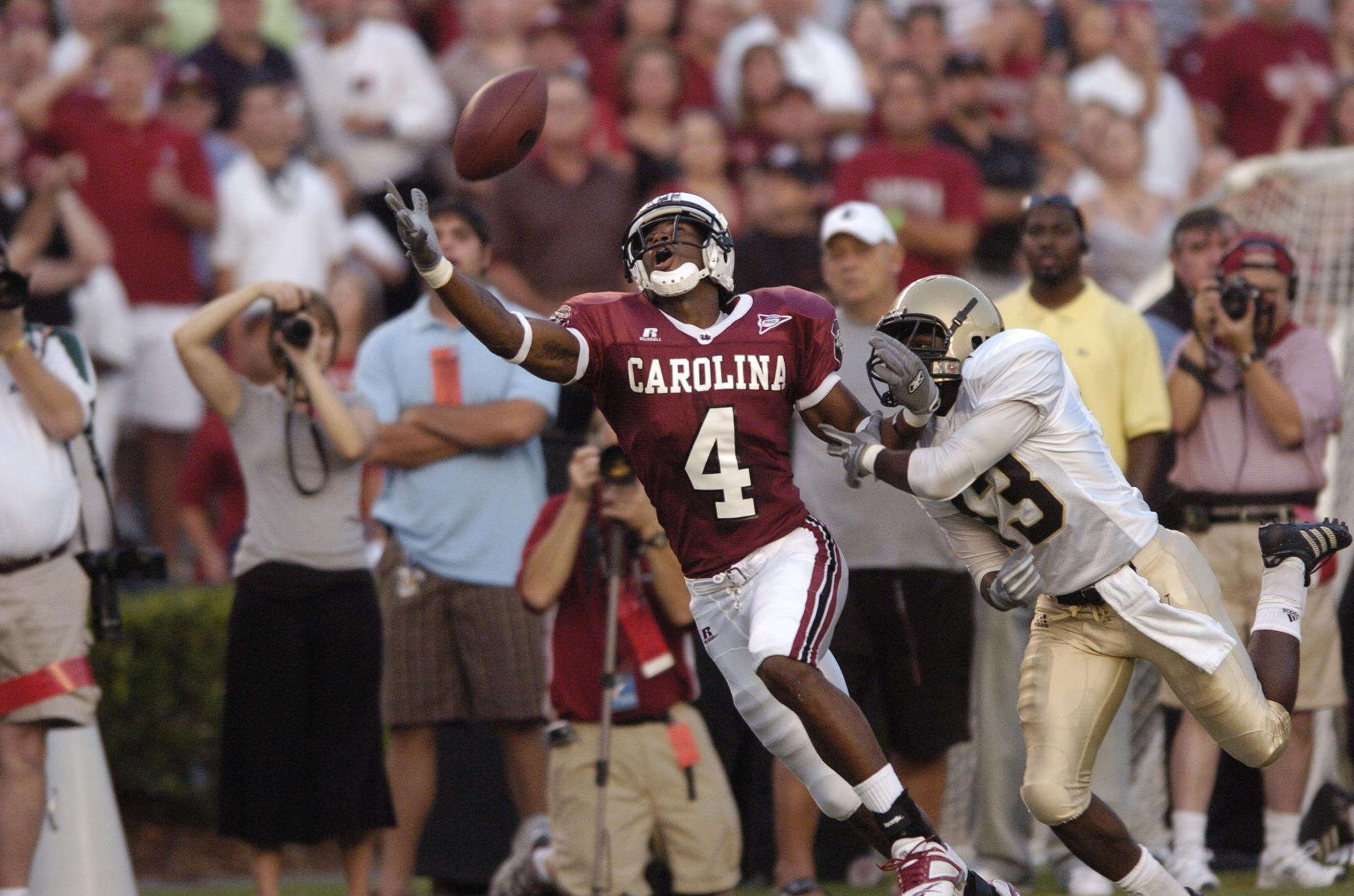 Ceremony Set for May 23

After a year-long absence due to the COVID-19 pandemic, the South Carolina Athletic Hall of Fame’s Induction Banquet honoring the classes of 2022 and 2020 is set for Monday, May 23 at the Columbia Metropolitan Convention Center.  The 11-individuals will be forever enshrined with the Palmetto State’s highest athletic honor.

The SCAHOF Banquet is the largest annual celebration of Palmetto State sports stars under one roof. The traditional introduction of past inductees, the “Walk of Legends”, is one of the event’s highlights. The affair, which includes a reception and dinner, begins at 5:30 p.m. Table sponsorships may be purchased online at https://www.scahof.com/purchase.

SIDNEY RICE
Sidney Rice, a Gaffney native, was a first-team All-SEC wide receiver at the University of South Carolina (2005-06).  Rice, who earned freshman All-America honors, caught 142 passes and hauled in 23 touchdown passes in his career, which includes a school-record five touchdowns against Florida Atlantic on Sept. 23, 2006.  He totaled 2,233 career receiving yards, an average of 15.7 yards per reception.

Rice was chosen by the Minnesota Vikings with the 2nd round (44th overall pick) in the 2007 draft. He spent his career with the Vikings (2007-10) and the Seattle Seahawks (2011-13).  He was a member of the Seahawks’ Super Bowl XLVIII championship team, earned Pro Bowl honors in 2009 and holds the record for most touchdown receptions (3) in a playoff game.  For his NFL career, he caught 243 passes for 3,592 yards and 30 touchdowns.

In 2003, he earned the Eddie Robinson Award as the top FCS coach after leading the Terriers to the FCS semifinals. He helped Wofford to the quarterfinals five times.


FRED HOOVER
Fred Hoover, who was hired by legendary coach Frank Howard, served as trainer of the Clemson football team for 40 years (1959-98) and began working the sidelines seven years prior to the existence of Howard’s Rock.

Hoover has held just about every administrative post with the National Athletic Trainers Association, including Chairman of the Board. In 1981, he was enshrined in the Citizens Savings-Helms Athletic Foundation Hall of Fame for his work in his chosen field. In 1982, Hoover was inducted into the Clemson Athletic Hall of Fame.

In 1983, Hoover was the recipient of the Distinguished Service to Sports Medicine Award given by the American Orthopedic Society for Sports Medicine. In 1987, he was awarded the South Carolina Hall of Fame Distinguished Service to Sports Award. He was made an honorary member of the Clemson Alumni Physicians Society in 1990. In 1994, the South Carolina Trainers Association created the Fred Hoover Award for excellence in Athletic Training.

Following college she entered the basketball coaching profession and served as an assistant coach at Tennessee while earning her master’s degree. She was named head women’s basketball coach at UNCC in 1975 and led the 49ers to three 20+ wins campaigns over her seven seasons.

During her tenure with the Charlotte 49ers, she served as 49ers Director of Athletics for 28 years and was a member of the athletics department for 43 years. At the time of her appointment in 1990, she was just the third female to be put in charge of a Division I program. In 1999-00, she became the first female to serve on the NCAA Division I Men’s Basketball Committee. She also completed a term as 2003-04 President of the National Association of College Directors of Athletics (NACDA).

Chief among her accomplishments with the university is the systematic growth of the 49ers program. That growth culminated with the unveiling of the Charlotte 49ers football program in 2013 — a start-up program that will play two years as an FCS Independent before moving to the FBS Conference USA in 2015. In 2012, the football fieldhouse was named by donor Dale Halton in her honor: Judy W. Rose Football Center.

C.J. SPILLER
C.J. Spiller, a two-time first-team all-ACC running back, played at Clemson University and was recognized as an unanimous All-American (2009) after being named the Atlantic Coast Conference Player of the Year. For his career, Spiller rushed for 3,547 yards and 51 touchdowns (32 rushing, 11 receiving, 8 special teams).

Drafted by the Buffalo Bills with the ninth overall pick in the 2010 draft he also played for the New Orleans Saints, Seattle Seahawks, New York Jets and Kansas City Chiefs, and made the 2012 Pro Bowl while playing for the Bills. For his professional career, Spiller rushed for 3,451 yards and 12 touchdowns, and collected 1,484 yards receiving with 9 scores. He continues to hold the ACC record for career all-purpose running yards with 7,588, the fourth-highest total in NCAA history, which led to his jersey number 28 being retired in 2010.

As a member of Clemson’s track team, he earned 2008 All-America accolades for the 60m indoors and in 2009, collected All-America honors for being part of the 4x100m relay team. He also was named All-ACC twice for his indoor and outdoor sprints.


TODD ELLIS
Todd Ellis finished his career at the University of South Carolina as the all-time leading passer and winningest quarterback in Gamecock history. He rewrote the school’s passing records where he established more than 20 school passing marks while throwing for 9,953 yards. He ranks second in wins by a starting quarterback with 24 and is one of only two quarterbacks in school history to lead the team in passing yards in four-consecutive seasons. A three-time team MVP, he led USC to the 1987 Gator Bowl and 1988 Liberty Bowl. He led the 1987 squad that finished No. 15 in the final national polls.

He was selected by the Denver Broncos in the ninth round of the 1990 NFL Draft. A graduate of the USC Law School, Ellis in 2021 worked his 30th season with USC’s radio network and 17th as the play-by-play voice of Carolina football.


GAYLORD PERRY
One of the greatest pitchers in Major League Baseball history, Gaylord Perry left his mark on the Limestone College baseball team as the program’s founder and first head coach. He led the Saints for four seasons, compiling an 81-57 (.587) mark and three 20-win seasons.

A five-time All-Star and a two-time Cy Young Award winner during his 22 seasons in the big leagues, Perry retired with 314 career wins, 3,534 strikeouts, and a 3.11 earned run average. He pitched for eight major league teams and was enshrined into the Baseball Hall of Fame in 1991. Perry was the first player in history to win the Cy Young Award in each league, winning with the Cleveland Indians (1972) and with the San Diego Padres (1978).

In 1988, he started the baseball program at Limestone and promptly guided the Saints to a respectable 17-21 mark in the inaugural season. His teams posted winning records in each of the following three seasons while the 1990 team still holds the school record for the highest single-season winning percentage (.697). He mentored three All-NAIA District 6 selections, including Tracey Sanders who was selected by the Cleveland Indians in the 1990 draft.


DAN DRIESSEN
Hilton Head native Dan Driessen played for five teams in his 15-year big-league career. He is best known as a member of the Cincinnati Reds “Big Red Machine” of the 1970s. Driessen attended Michael C. Riley High (which did not have a baseball team) until his senior year. He then went to Hardeeville High which also did not have a team, but he made a name for himself as a catcher with the town team, the Hardeeville Boll Weevils.

Driessen was signed by the Reds as an amateur free agent in 1969. He made his major-league debut at age 21 on June 9, 1973. In 1976, Driessen became the National League’s first-ever designated hitter in a World Series. He hit .357 with five hits (including two doubles and a home run) and two walks in 16 plate appearances as the Reds swept the series for their second consecutive World Series crown. He was part of Cincinnati’s 1975 World Series-winning team in the Reds’ seven-game win over the Boston Red Sox.

His most productive year was in 1977 as he hit .300 with 17 home runs and a career-high 91 runs batted in along with a career-high 31 stolen bases. Driessen led all National League first basemen in fielding three times and also led the NL in walks with 93 in 1980.  Driessen also played for the Montreal Expos, San Francisco Giants, Houston Astros and St. Louis Cardinals, where he played in his third World Series in 1987. He was inducted into the Cincinnati Reds Hall of Fame on June 23, 2012.


ED LYNCH
After a standout career at the University of South Carolina where he pitched from 1974-77 and recorded a career mark of 15-3 including College World Series appearances in 1975 and ’77, Ed Lynch was drafted by the Texas Rangers in the 22nd round of the 1977 Major League Baseball Draft. After three years in their farm system, the Rangers sent him to the New York Mets where he debuted on August 31, 1980.

After his career ended, he attended the University of Miami School of Law, and graduated in 1991. Using his law degree and prior baseball experience he was able to land management positions with the San Diego Padres and Cubs, where he eventually became the Cubs’ general manager from 1994-2000.

He came to USC on a basketball scholarship and was signed by Coach Frank McGuire.


ROBERTA WILLIAMS
In 1976, Roberta Williams became the first female athlete to receive a full scholarship at South Carolina State University when she was signed to play basketball. When her career ended four years later in 1980, the Charleston and Burke High School graduate had become the most prolific scorer in SC State basketball history. Also, she is today the only SC State basketball player whose jersey has been retired.  Williams scored more than 3,000 points during her career, and was the team’s leading scorer three times.

The Lady Bulldogs were 121-13 during the four years she played (30-5, 28-1, 33-2, and 30-5). She led the Lady Bulldogs to the AIAW (Association for Intercollegiate Athletics for Women) National Division II Championship in 1979 and was named the tournament MVP. A year earlier, she had powered SC State to the AIAW national championship game (1978). Williams garnered a host of honors and awards during her career as she was a three-time All-Conference and All-State selection and also reaped All-Region honors. She was twice named an AIAW All-American. In 1980 she was a second-round draft pick of the WBL’s (Women’s Basketball League) San Francisco Pioneers.

He was the fourth overall pick in the 1997 Draft and spent his entire eight-year NFL career with the Baltimore Ravens. He was named to the NFL All-Rookie Team as the league’s defensive rookie of the year and was selected for four Pro Bowls. A member of the 1999 All-Pro Team, Boulware won a Super Bowl ring with the 2001 Ravens. He is a member of the Ravens’ Ring of Honor and has been enshrined in Florida State’s Athletic Hall of Fame.

He was appointed to the State of Florida’s Board of Education and, along with his wife Kensy, they started the Community Leadership Academy in Tallahassee.