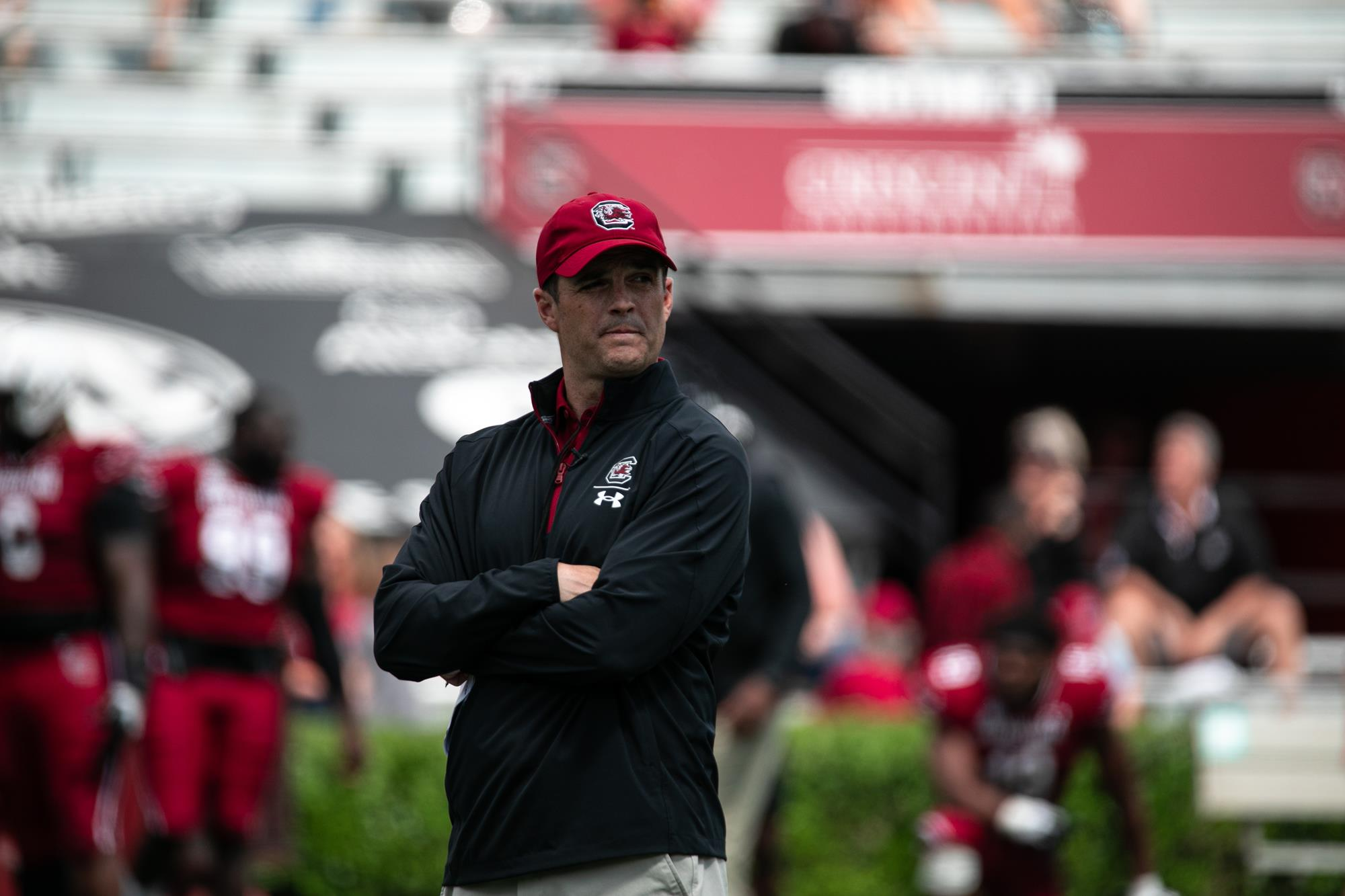 Second Year of the Shane Beamer Era Begins in Columbia

The 2022 Spring Football Media Guide can be found here.

The 2022 edition of South Carolina Football begins with an optimism that hasn’t been seen in Columbia in several years.

The Gamecocks, in the second year of the Shane Beamer Era, are coming off a 7-6 campaign, which included November wins over traditional SEC powers Florida and Auburn, along with a convincing victory over North Carolina in the Duke’s Mayo Bowl. The experts had put the over/under win total at three-and-a-half prior to the start of the season after the Gamecocks could muster just six wins over the previous two seasons combined.

By winning twice as many games as predicted, the year culminated with Coach Beamer earning a share of the Steve Spurrier First-Year Coach of the Year Award, as selected by the Football Writers Association of America.

That success, along with Coach Beamer’s infectious personality and positive vibe, has instilled a quiet confidence around the Long Family Football Operations Center, and a “buy-in” in the community. It has also removed much of the doubt that comes when a first-time head coach is hired, wondering if he is up for the challenge of coaching in the nation’s toughest conference. The upward trajectory of the program has manifested in a solid recruiting class, along with a handful of high-level transfers that want to be part of the culture that Coach Beamer and his staff are building in Columbia.

Some of the national pundits are beginning to take notice as well, as the Gamecocks have entered the conversation as a pre-season top-25 team, according to some “way too early” prognostications.

But Coach Beamer is the first to acknowledge that, while seven wins was a step in the right direction following a two-win campaign in 2020, it’s not the end goal. There is much work to be done to get the Gamecocks back to the level that he experienced while working as an assistant under Steve Spurrier a little more than a decade ago.

A pair of changes have been made to the coaching staff, as Coach Beamer hired Sterling Lucas and Jody Wright, two coaches with both college and NFL experience, to join his staff. Lucas, an Orangeburg, S.C. native who played his college ball at NC State, will coach the outside linebackers and defensive ends. Wright, who garnered several championship rings while serving a pair of stints on Nick Saban’s staff at Alabama, will mentor the tight ends.

After a couple of months in the weight room with strength & conditioning coach Luke Day, the Gamecocks will take to the practice fields for the first of their 15 allotted spring practices on Tuesday, March 15. The 112 players on the spring roster includes 54 returning letterwinners (25 on offense, 24 on defense and five specialists), 13 of a possible 24 returning starters (seven on offense, five on defense and one specialist), six scholarship transfer players and seven of the 21 incoming freshmen from the 2022 signing class.

While depth remains an issue at some positions, the roster has undergone a complete makeover in just a year, and the talent level has been upgraded across the board.

The key returners from the offensive side of the ball include everyone from the offensive line, featuring multiple-year starters Jovaughn Gwyn, Eric Douglas and Dylan Wonnum, along with skill position standouts in tight end Jaheim Bell and wide receiver Josh Vann, along with Duke’s Mayo Bowl MVP Dakereon Joyner.

The defense has talent at all three levels, and will be led by defensive tackle Zacch Pickens, the squad’s top returning tackler in linebacker Brad Johnson, and All-SEC cornerback Cam Smith. Sherrod Greene also returns to bolster the linebacking corps after suffering a season-ending injuries early in both the 2020 and 2021 campaigns.

Six mid-year transfers are all expected to make an immediate impact in 2022. Quarterback Spencer Rattler headlines the group. Rattler was a pre-season Heisman candidate at Oklahoma a year ago. A pair of running backs in Christian Beal-Smith (Wake Forest) and Lovasea Carroll (Georgia) replace the one-two punch of Kevin Harris and ZaQuandre White from a year ago. Antwane Wells Jr. (James Madison) provides another play-making threat at wide receiver. On the defensive side of the ball, Terrell Dawkins (NC State) joins Jordan Burch and Jordan Strachan at the EDGE position, while Devonni Reed (Central Michigan) should help shore up the secondary following the departure of All-American safety Jaylan Foster.

The Gamecocks once again have a difficult schedule to navigate as they hope to contend for a spot in Atlanta and the 2022 SEC Championship game. The schedule features home conference games against defending national champion Georgia, Texas A&M, Missouri and Tennessee, while Carolina will travel to Arkansas, Kentucky, Vanderbilt and Florida for SEC contests.

The non-conference slate includes a season-opening match with former Gamecock assistant coach Shawn Elliott and Georgia State, the first-ever gridiron meeting with Charlotte and a date with FCS South Carolina State, all at home, along with the annual regular-season finale with Clemson.

Offensive coordinator/quarterbacks coach Marcus Satterfield would be the first to admit that the Carolina offense struggled at times last year and needs to be more consistent in moving the ball and scoring points. However, no one else in the country had four different starting quarterbacks lead their team to a win in 2021 like Satterfield and the Gamecocks did. Spencer Rattler, a Heisman hopeful a year ago, figures to upgrade the quarterback room that includes Luke Doty, who came out of the spring a year ago as the projected starter. The transfer tandem of Christian Beal-Smith and Lovasea Carroll replace Kevin Harris and ZaQuandre White, who both earned NFL Combine invitations, at running back, and will compete with MarShawn Lloyd and Juju McDowell for the bulk of the carries in a deep and talented backfield. Versatile Jaheim Bell and Traveon Kenion are the top returners at tight end, a position that will add Oklahoma transfer Austin Stogner in the fall. Josh Vann returns following a breakout season last year at wide receiver. Transfer Antwane Wells Jr. joins the receiving corps that has shown glimpses, but is otherwise mostly unproven outside of Vann. Dakereon Joyner is coming off an MVP performance in the Duke’s Mayo Bowl, and has to be accounted for as a playmaker. The offensive line has everyone returning, including multi-year starters Jovaughn Gwyn, Eric Douglas and Dylan Wonnum, along with Vershon Lee, Jazston Turnetine and Tyshawn Wannamaker, who all started multiple games last season. That group as a whole is positioned to take a big step forward this season.

Under the tutelage of defensive coordinator/inside linebackers coach Clayton White, the Gamecock defense made tremendous strides a year ago and will look to build on that improvement this season. Carolina surrendered 24.0 points per game in 2021, down from 36.0 points in 2020. The unit loses EDGE rusher Kingsley “JJ” Enagbare, considered an early round pick in the 2022 NFL Draft, along with All-American safety Jaylan Foster. Five starters return, including three defensive backs – cornerbacks Cam Smith and Darius Rush, and safety R.J. Roderick – to a unit that led the SEC and ranked seventh in the country in passing defense. That unit adds Central Michigan graduate transfer Devonni Reed, who is expected to fill the void left by Foster’s graduation. Zacch Pickens is a stalwart in the middle of the defensive line and is an all-league caliber player. Uber-talented Jordan Burch, Jordan Strachan, who led the nation in sacks two years ago, and NC State transfer Terrell Dawkins figure to provide pressure off the edge. The linebacking corps will get a boost with the return of Sherrod Greene, who was sidelined with an injury for much of the 2021 campaign, along with Brad Johnson, who was second on the team in tackles in 2021.

All phases of the Gamecock special teams, under the guidance of Pete Lembo, were vastly improved last year, but Lembo will need to find a replacement for placekicker Parker White, a five-year starter who graduated as the school’s all-time leading scorer. White will be hard to replace, as he missed just one kick all season in 2021. Mitch Jeter has waited his turn for that role while serving as the kickoff specialist for the past two years and may be the guy to beat for the starting nod. The punting chores are in the capable hands (and left foot) of junior Kai Kroeger, Kroeger, a Freshman All-SEC selection in 2020, boomed a pair of 70-yard punts last season.  Kroeger is also one of the best in the country as a holder on placements. Matthew Bailey and Hunter Rogers shared the snapping duties last year, with Bailey working with the field goal team and Rogers serving as the long snpaper on punts. Juju McDowell earned Freshman All-SEC honors as a return specialist last year and will be a candidate for those duties again in 2022.