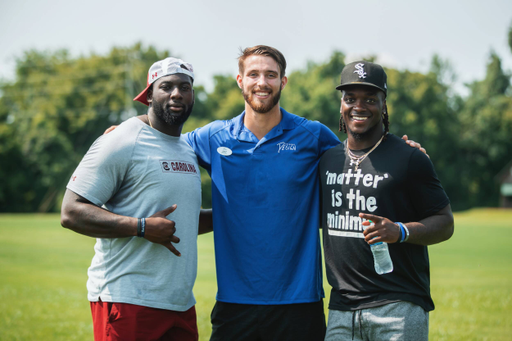 University of South Carolina redshirt senior Dakereon Joyner is one of 114 student-athletes nominated for the 2022 Allstate AFCA Good Works Team®, Allstate and the American Football Coaches Association (AFCA) announced today. The nominees have displayed exemplary community service, academic dedication and impact on and off the field.

Joyner, a 6-1, 215-pounder from North Charleston, S.C., is a versatile performer on the field. Working primarily at wide receiver, he caught 24 passes for 221 yards last season, but he also played quarterback in the Duke’s Mayo Bowl, winning MVP honors after completing all nine of his passes for 160 yards and a touchdown. Off the field, he has earned a bachelor’s degree in sport and entertainment management, has served an internship with the Charleston County Parks and Recs office, and hosted the inaugural DK Joyner Football Camp in May at Fort Dorchester High School, among other community endeavors.

“For 31 years, the Good Works Team has recognized the inspirational work of thousands of young men off the football field,” said Troy Hawkes, executive vice president and general manager, Allstate Sales and Distribution. “Allstate and AFCA celebrate these athletes as an example for how each of us can be true champions. Their selflessness makes the sport and communities across the country that much better.”

This year’s candidates are scholars, leaders and community champions. They have volunteered to build homes, mentor underserved kids and feed the hungry, as well as advocate against domestic violence and civil injustice.

“While these players are tremendous athletes on the field, they are even better people off of it. They realize that giving back is one of the most important things you can do in your life, and I am inspired by how they have used their opportunities to make life better for those around them,” said Tim Tebow, two-time national champion, Heisman Trophy winner and 2009 Allstate AFCA Good Works Team member. “The impact they make will go well beyond their football careers. These men represent the true heart of our sport.”

A Panel Chooses the Team

The final 22-member team and honorary coach are selected by a voting panel of former Allstate AFCA Good Works Team members and journalists. They look for exceptional leadership on and off the football field.

After the final team members are announced in September, fans can vote for this year’s Allstate AFCA Good Works Team captain through the official page on ESPN.com. Fans can join the conversation on social media with #GoodWorksTeam throughout the season.

“These players embody the best of what college football stands for: character, selflessness and the willingness to serve and give to others,” AFCA Executive Director Todd Berry said. “The AFCA proudly stands alongside Allstate and each of these players’ families and communities to applaud their inspirational work off the field.”

Established in 1992, the Allstate AFCA Good Works Team is one of the most coveted community service awards in college football. From the 114 nominees, the final roster of 23 award recipients will bring together 11 players from the NCAA Football Bowl Subdivision; 11 players from the NCAA Football Championship Subdivision, Divisions II, III and the National Association of Intercollegiate Athletics (NAIA); and one honorary head coach. To be considered for a spot on the Allstate AFCA Good Works Team, each player must be actively involved with a charitable organization or service group while maintaining strong academic standing.