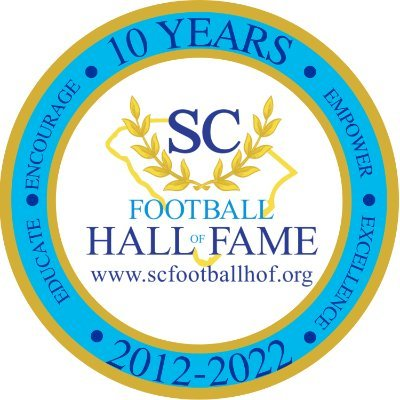 The South Carolina Football Hall of Fame (SCFHOF) has opened online voting for their Class of 2022 with a First Round Nomination Ballot presented by Wyatt Law, P.A, trusted legal services.

This year’s ballot consists of 70 nominees of players, administrators, and coaches, including 10 Legacy nominees. A Legacy nominee honors those that are considered outside of the modern era and/or have passed away. Each man was either born, grew up (or played) in the state of South Carolina, coached at one of the collegiate football programs in the state, or has had a positive and significant impact on the game in South Carolina. The Class of 2022 nomination list represents a SCFHOF record nine South Carolina college football programs.

Voting is done online at scfootballhof.org and is open to everyone for free who would like to participate. The first-round voting period (now through November 14, 2022) provides SCFHOF members, football fans, and media outlets an opportunity to vote for up to four (4) modern era nominees and one (1) legacy nominee either from the ballot that has been provided or a “write-in” for the Class of 2022. The final round of voting will follow shortly after featuring the top names from the Nomination Round vote. The Class of 2022 will be enshrined at the organization’s Tenth Annual Enshrinement Ceremony scheduled for April 21, 2023, at the Hilton Greenville.

About
The SCFHOF is a 501(c)(3) “For Impact” organization whose mission is to honor South Carolina football legends and help lead South Carolina students to the Top 10 states in the country for college and career readiness by December 31, 2030. The SCFHOF is on a mission, celebrating excellence and educating, encouraging, and empowering ourselves first and then others to live in purpose to bring out the best for our South Carolina Community. The SCFHOF believe that with your support SC students can be Top 10 nationally in college and career readiness by December 31, 2030. (Ranked 43rd nationally in 2019 by U.S. News & World Report)

The SCFHOF invites you to play your role in this worthwhile legacy. Go to scfootballhof.org to vote today! #SCTop10N2030