Looking Back to 1984 Matchup with Notre Dame

It’s been a while since South Carolina and Notre Dame met on the gridiron. Having served as South Carolina’s football radio analyst for the last fifty years, former Gamecock quarterback Tommy Suggs has fond memories of the last time the two teams met during the 1984 season which resulted in a thrilling 36-32 victory for the Gamecocks over the Fighting Irish.

“At that time, playing at Notre Dame was impactful,” Suggs said. “There was so much excitement in going up there at 5-0 and seeing if we could survive the test.”

The 1984 season was one of the most successful in program history up to that point. South Carolina football played as an independent, as Notre Dame still does for the most part. The Gamecocks were ranked 11th nationally when they travelled to South Bend, Indiana for the October 20 matchup that year. Regardless of where Notre Dame sat in the polls, they were still considered one of the hallowed programs in college football.

“Were we intimidated? No,” Suggs said. “Clearly, we respected them and that place. It was all kind of fun, really.”

The Gamecocks trailed 26-14 after a trick play saw running back Allen Pinkett throw a touchdown pass to quarterback Steve Beuerlein. South Carolina quarterback Mike Hold came off the bench in the second half to spark a rally, hitting five on nine passes for 67 yards while rushing 15 times for 72 yards.

Hold engineered a 63-yard drive topped by a one-yard scoring run, and a Kent Hagood two-point conversion, cut the deficit to 26-22 in the fourth quarter. Hold later scrambled 33 yards behind a key block from wide receiver Eric Poole for a touchdown and a 29-26 lead. The Gamecocks added a short touchdown run later to stretch the lead to 36-26, and South Carolina held on for the 36-32 win.

“This team had a lot of confidence, and (head coach) Joe (Morrison) had that mystique about him, and they bought into that. ” 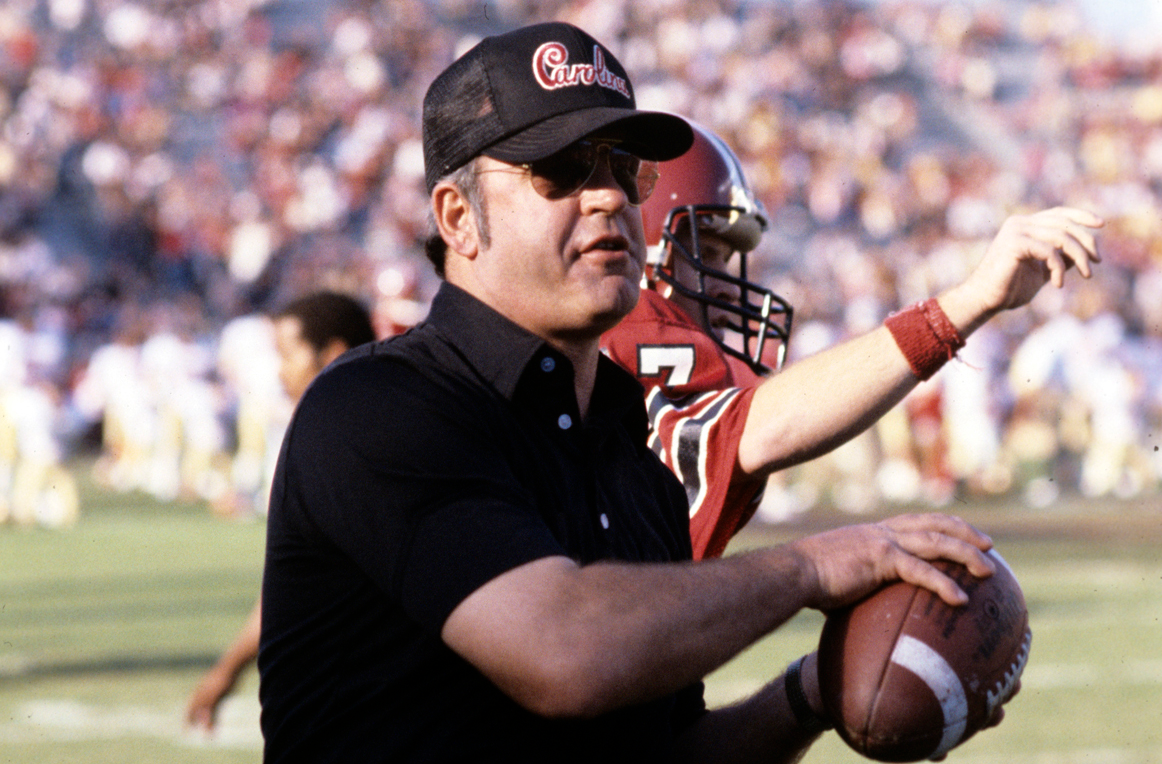 “That rotation at quarterback would be somewhat unusual today, but that was a normal part of the strategy that year,” Suggs said. “Both Allen Mitchell and Mike Hold had different strengths and we called different plays based on what they did better. We have a little bit of that today, but not to the frequency as it figured into our game plan back then.

“Back then, I don’t think they were as limited with the time that they could practice like they are now. You could spend more time to get ready for it. It might be a bigger weapon to do that now than it was back then, but it worked very well!”

The 6-0 start was the best start in program history at the time and marked the first time since 1956 that Notre Dame suffered three straight home losses. Suggs knew there was something special brewing, but he remained cautiously optimistic.

“Sometimes you don’t know if it’s all wishing and hoping, but I think this time I couldn’t get my arms around it,” Suggs said. “Were we really good and I wondered whether we really had something special or if things were coming together as a team. We weren’t an overly athletic team, but the parts fit. That’s all you want anyway; kids that just know how to win. This team had a lot of confidence, and (head coach) Joe (Morrison) had that mystique about him, and they bought into that. You were beginning to think like that, but you kept looking down the schedule and wondering who can get us? There was a little bit of uneasiness. It was fun and exciting. We weren’t overly confident, but I was enjoying the ride.”

While it was only a regular season game, the significance of the victory was not lost on the rabid South Carolina fan base. When the Gamecocks returned to Columbia that night, they were greeted by a crowd of more than 8,000 Garnet and Black faithful at the airport.

“Back in those days we came into the main airport,” Suggs said. “I remember that game, which was wild, and when we beat Michigan up there, I think in 1980. Those were the biggest crowds at the airport that I remember. It was crazy. People wanted us to be good, and one of those first real challenges was at Notre Dame. If you won there, you were doggone good.”

The Gamecocks later improved to 9-0 after a win over No. 11 Florida State at Williams-Brice Stadium and saw the team climb to No. 2 in the nation. South Carolina was upset by Navy a week later but closed the regular season with a 22-21 win at Clemson.

The 1984 team would finish the regular season 10-1, and ironically, they were invited to play in the Gator Bowl where they lost a close matchup to Oklahoma State, 21-14 in front of a crowd that was estimated to be at least 3/4 Gamecocks fans. South Carolina hopes for a better result in this year’s Gator Bowl on Dec. 30.

“It was a special year, and it sort of captured the nation to a certain degree with some of the nicknames that they had for our team,” Suggs said. “It was really fun to be a part of it. Playing Notre Dame now, I think it’s interesting that we both beat Clemson this year. I think it will be exciting playing on a neutral site. We’re ranked again, so let’s go get ‘em!”