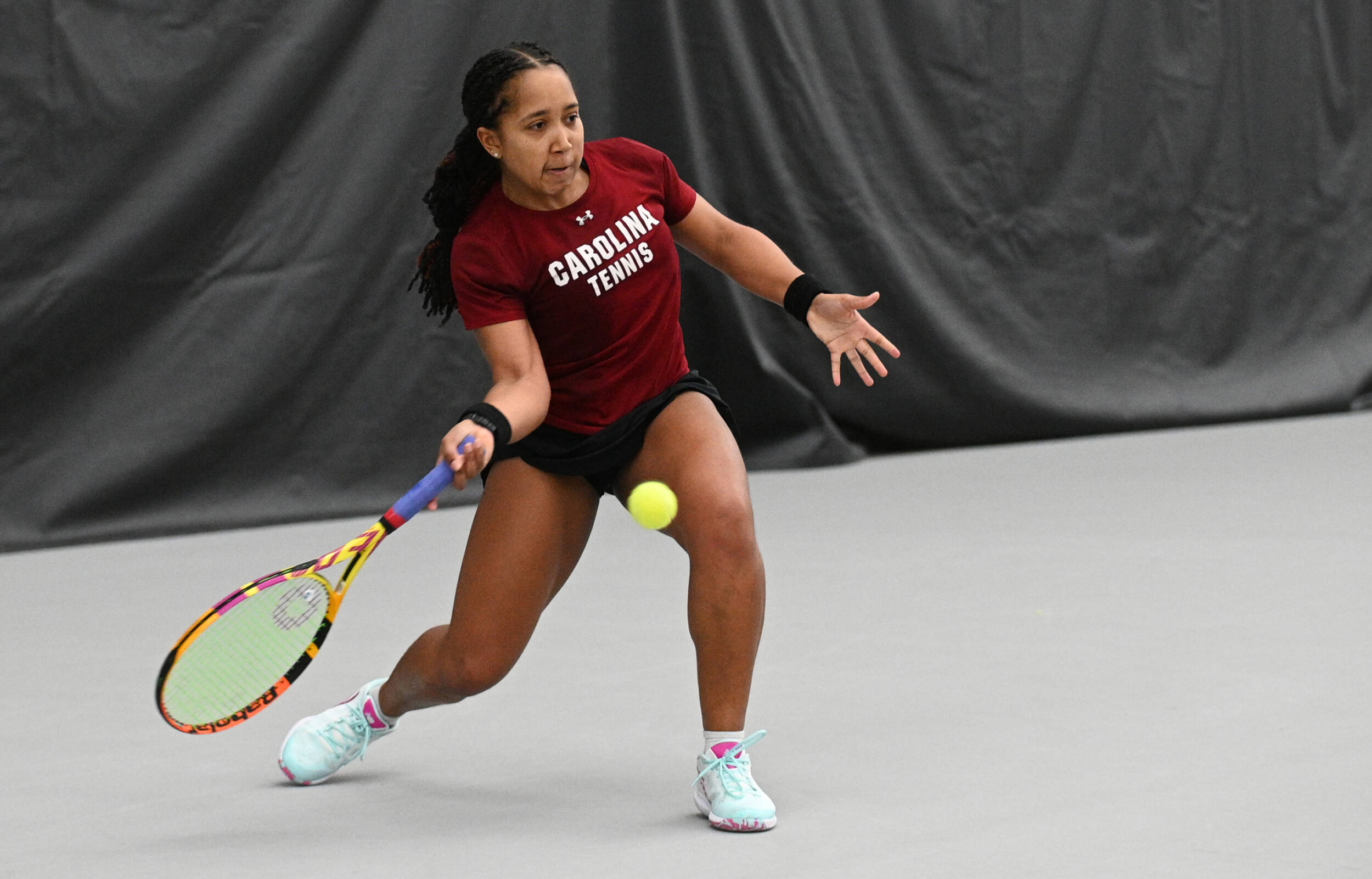 Columbia, S.C.  – No. 20 Ayana Akli earned an upset win over No. 13 Alana Smith of NC State in South Carolina’s 1-6 loss to the third-ranked Wolfpack on Saturday. The Gamecocks put up a valiant fight in doubles but ultimately dropped the point and five of six singles matches.

In doubles, NC State took the first win of the day at doubles #2, but the newly paired team of freshman Alice Otis and senior Elise Mills responded with a win at the #3 position. The Gamecock pair pulled off an impressive come-from-behind win after going down 1-3 early in the set. Otis and Mills fought back to keep themselves in the match and eventually regain the lead for the 6-4 win.

The doubles decision came down to the top court where Akli and sophomore Gracie Mulville were battling against the nation’s No. 8 pair Amelia Rajecki and Nell Miller. The Gamecock pair earned a break midway through the match but was unable to capitalize at match point which opened the door for the Wolfpack to regain the lead and take the win 7-5 to claim the doubles point.

Play moved to singles where the highly touted NC State team proved their strength, taking straight-sets wins on Courts 2 and 5 to go up 3-0 before Akli gained the South Carolina’s lone point.

The Silver Spring, Maryland, native was dominant in her first set, taking it 6-1 before coming back to win the second 6-4. Akli’s win over No. 13 Smith is her highest ranked win of the season. The win marks Akli’s first career win from the No. 1 position as a Gamecock.

No. 97 Sophie Abrams secured the win for the Wolfpack on Court 4 and No. Abigail Rencheli extended their lead with a win on Court 3.

The last match on was between Otis and Miller, a freshman and fifth-year senior. The Gamecock jumped out to a 3-0 lead in the first set and went on to take the set 6-3. Miller evened the match with a 7-5 second set and the decision came down to a third set tiebreaker. The more experienced Miller was able to secure the win in the final set 1-0(4).

South Carolina women’s tennis will be in action next in Charlottesville, Virginia, for the ITA Kickoff Weekend. The Gamecocks will take on Northwestern on Fri., Jan. 27 at 6 p.m. and will face either Virginia or Washington State on Saturday. The winner of the weekend will advance to the ITA Indoor National Championships in Seattle, Washington.