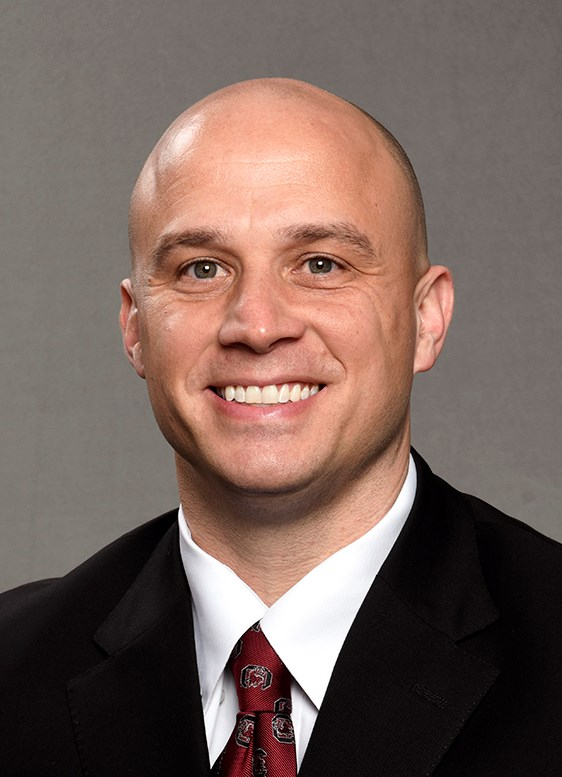 Columbia native Justin Stepp begins his second season with the Gamecocks. He joined the University of South Carolina football staff as the wide receivers coach on Jan. 4, 2021.

In his first season at Carolina, Stepp was instrumental in helping Josh Vann put together his best season as a Gamecock and become a quality SEC receiver. Vann led the team with 43 receptions for 679 yards after logging just 47 catches for 377 yards over his first three seasons in Columbia.

Stepp spent the prior three seasons as the wide receivers coach at the University of Arkansas. During his time in Fayetteville, he had five players combine for six 400-yard seasons and 26 touchdowns. In 2020, sophomore Treylon Burks became the first Arkansas wide receiver to earn All-SEC recognition since 2015 after hauling in 51 catches for 820 yards and seven touchdowns. In 2019, Burks and Trey Knox were one of the top freshmen receiving tandems in the nation, combining for 57 catches and 860 yards, most among SEC freshman duos.

Off the field, Stepp was named as one of the nation’s Top-25 recruiters by Rivals thanks to the addition of four four-star receivers. The Razorbacks were the only team in the nation to sign four four-star wide receivers in the 2019 class. In Stepp’s four recruiting classes on the Hill, he’s brought in seven 4-stars recruits. In addition, Stepp was selected to participate in the 2018 AFCA 35 Under 35 Coaches Leadership Institute, a prestigious program aimed at identifying and developing premier, future leaders in the football coaching profession. He was also named a finalist for the 2017 FootballScoop Wide Receivers Coach of the Year award.

Prior to his arrival in Fayetteville, Stepp spent three seasons (2015-17) as the wide receivers coach at SMU under head coach Chad Morris. Stepp’s protégés Courtland Sutton and Trey Quinn were two of the most dynamic wide receivers in college football in 2017 and each went on to be selected in the 2018 NFL Draft. The Mustangs boasted one of the most prolific passing attacks in the nation with All-Americans Sutton and Quinn each posting 1,000-yard receiving seasons. SMU was one of only two schools with multiple 1,000-yard receivers in 2017. In addition, Sutton and Quinn were the only pair of teammates to rank in the top-10 in touchdown receptions and combined for a dozen 100-yard receiving games.

In 2016, Sutton led the SMU offense for the second-straight season, hauling in 76 passes for 1,246 yards and 10 TDs to become SMU’s first 1,000-yard receiver since 2013. In addition, James Proche, caught 57 passes for 709 yards and six scores on his way to Freshman All-America honors.

Stepp’s first season at SMU saw him develop Sutton into a Freshman All-American in 2015 after leading all FBS freshmen with nine receiving touchdowns. He set an SMU freshman record for receiving yards with 862 and tied for the most touchdowns by a freshman.

Stepp’s first full-time collegiate role came as the wide receivers coach at Appalachian State University from 2012-14. While at App State he coached three players who combined to earn five All-Southern Conference honors, including All-American Sean Price who set NCAA Division I FCS freshman records with 81 receptions and 1,196 receiving yards in 2012.

Stepp starred at Pelion High School, helping the Panthers to an unbeaten regular season in 2000, before becoming a standout wide receiver and punt returner at Furman from 2003-06. He earned All-SoCon recognition as a junior and senior and finished his playing career with 1,568 yards, 10 touchdown catches and 118 receptions, good for No. 4 on the school’s career list at the time.

Stepp’s professional career began as wide receivers and strength coach at Fort Mill (S.C.) High School in 2007 before becoming the wide receivers coach and recruiting coordinator at NCAA Division II North Greenville in 2008. He worked as a graduate assistant at Clemson from 2009-11.

Born July 5, 1983, Stepp and his wife, Brooke, have a son, Courtland Spencer, and a daughter, Allison Blair. His twin brother, Josh, is an assistant football coach at Georgia State.