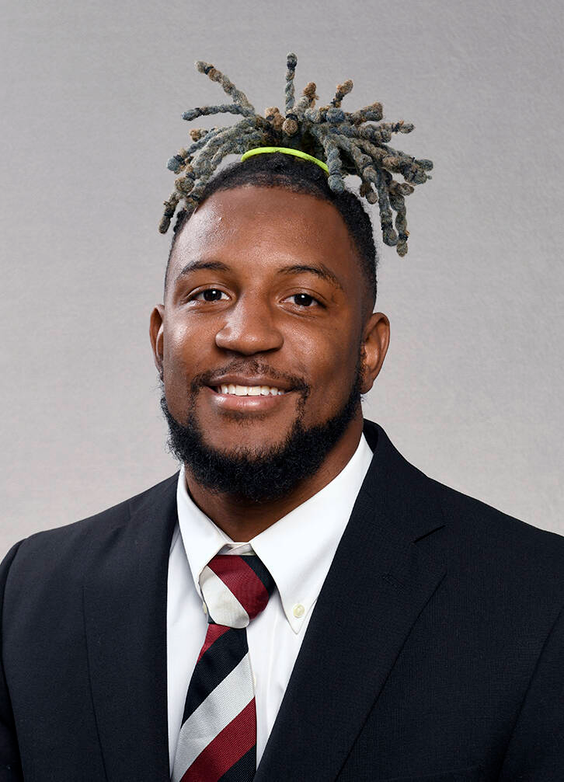 Fifth-year “Super Senior” who looks to build off the best season of his career… has good hands, a thickness and an ability to break a tackle… has become a leader of the group… is a pre-season second-team All-SEC selection by Phil Steele… Athlon also lists him as a pre-season second-team pick at wide receiver and a fourth-team selection as a punt returner… selected as the “You Got Mossed!” winner as part of ESPN’s NFL Countdown for his catch at Georgia in 2021… has appeared in 32 games over the past four seasons making eight starts… has 90 career receptions, tying for 25th in school history.

2021 (Senior)
Played in 13 games, making a dozen starts… named fourth team All-SEC by Phil Steele and Honorable Mention by ProFootballFocus… selected by his teammates as the Steve Spurrier Award winner as the team’s offensive MVP… led the team with 43 receptions for 679 yards… averaged 15.8 yards per reception… tied for the team lead with five touchdowns… logged three 100-yard receiving games, going over the century mark against East Carolina (127), Georgia (career high 128) and Florida (111)… became the first Gamecock with consecutive 100-yard receiving games since Deebo Samuel in 2018… hauled in a career-high seven passes in the win over Florida… rushed five times for 63 yards, 12.6-yards per tote… recorded 52 yards on the ground against Troy, including a career-long 34 yard scamper… returned six punts for 71 yards, 11.8 yards per return, with a long of 25 yards against Missouri… also had one kickoff return against Eastern Illinois… served as the team captain against Texas A&M… shared co-Most Improved Player of the Spring for Special Teams with Brad Johnson… named to the SEC Fall Academic Honor Roll.

2020 (Junior)
Appeared in all 10 games making four starts… earned starts against Florida and in each of the final three games against Missouri, Georgia and Kentucky… had two receptions each against Texas A&M and Missouri… scored his lone touchdown at LSU… named to the SEC Fall Academic Honor Roll.

2019 (Sophomore)
Sophomore wide receiver who saw action in nine games including three starts… caught 19 passes for 171 yards… earned starts against Charleston Southern, Alabama and Vanderbilt… logged a season-high and matched his career high with four receptions for 23 yards against Alabama… had a career-high 33 yards receiving on three catches against Florida… had a pair of catches for 26 yards at Tennessee, including a career-long 19-yard reception… did not play in the final three contests after suffering a broken hand in the Vanderbilt contest… named the Most Improved Player of the Spring for the offense.

2018 (Freshman)
True freshmen who played in all 13 games, making one start… caught 18 passes for 118 yards with one touchdown… had two catches for 10 yards in his debut against Coastal Carolina… logged a season-best 29 yards vs. Georgia, including a season-long 16-yard reception… made his first start against Missouri… had three receptions, including his first-career TD, in the win over Ole Miss… logged a season-best four catches versus Chattanooga… named to the First-Year SEC Academic Honor Roll.

HIGH SCHOOL
Graduated from Tucker (Ga.) High School in 2018… was a first-team all-state selection… coached by Bryan Lamar… the Tigers finished 2017 with a 12-2 record and a No. 24 ranking in the state while reaching the Class AAAAAA Final Four… caught 46 passes for 867 yards and 12 TDs as a senior… a U.S. Army All-American Bowl participant who also competed at The Opening Finals camp… scored 13 times on 63 catches for 1,300 yards as a junior… ranked as the No. 25 wide receiver prospect in the country in 247’s national composite rankings, and 146th-best prospect nationally… Rivals ranks him as the 24th-best player in Georgia, the 37th-best wide receiver in the country and No. 191 overall… rated No. 233 on the ESPN300 and No. 280 on the PrepStar 300 list.

Joshua L. Vann was born March 10, 2000… is an interdisciplinary studies major who is on track to graduate in December.