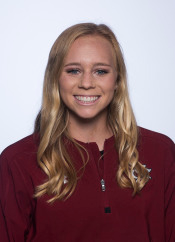 2020 (JUNIOR):
Hit .302 in 23 games, drawing 23 starts at third base for the Gamecocks… Posted 19 hits in 63 at-bats with 18 runs, five doubles, three triples and four home runs to go along with 15 RBI… Slugged .667 with five walks and 11 hit by pitches on her way to a .443 on-base percentage… Finished a perfect 1-for-1 on stolen base attempts… Finished with four multi-hit games and four multi-RBI games… Had a four-game hitting streak at one point, including a three-game hitting streak to close the year to go along with finished the year on a 17-game reached base streak… Went 2-for-4 with two runs, an RBI and two doubles in a Feb. 14 10-0 (6) win over Kansas in Clearwater… Posted four RBI in the 19-1 victory against NC Central on Feb. 19… Two-run home run against Coastal Carolina in a 10-2 (5) win on Mar. 10… Solo homer on Mar. 11 against Winthrop in a 2-0 win.

2019 (SOPHOMORE):
Hit .348 in 57 games with 57 starts… One of just two Gamecocks to start every game in 2019… Produced 56 hits and 50 runs with 44 RBI… Had 26 extra-base hits, including 15 home runs (tied for program best in a season)… Slugged .708 with a .500 on-base percentage thanks in part to 51 free bases (30 of which were walks)… First player in Beverly Smith era to lead the program in free bases in back-to-back seasons… Went 2-for-4 with a triple against Baylor on opening day in Mexico on Feb. 7… Hit 2-for-3 with three runs, three RBI and two home runs in the home opening win over UNCG on Feb. 15… Went 2-for-3 with a run and two RBI in a win at Arkansas on Mar. 17… Also went 2-for-3 at LSU on Mar. 31… Hit two home runs in the series opener at Missouri on May 3… Hit .308 in SEC play with seven home runs and 14 RBI as she slugged .662… Had a .483 on-base percentage in conference play… Batted .347 with 14 RBI and seven home runs away from home… Produced a career best in batting average, runs, hits, triples, home runs, RBI, total bases, slugging percentage, walks, strikeouts, on-base percentage and stolen bases.. Had 17 multi-hit games and a team-best 13 multi-RBI contests… Had an 18-game reached base streak during the year… Was named SEC Player of the Week for the first time in her career on Feb. 25… Named to the All-SEC Second Team and All-Region Squad.

2018 (FRESHMAN):
Had one of the finer season in Gamecock history for a freshman… Started all 66 games at third as she hit .256 with 43 hits and 39 RBI… Led the Gamecocks with 28 hit by pitches (program record) which paced the SEC on the season… Had the most assists for a Gamecock third baseman (151) and set the fielding percentage record for her position, as well (.978)… Had her first career hit in a 1-for-2 day with one run and three RBI to help Carolina defeat Hofstra (2/10)… Went 3-for-3 with three RBI and two doubles in the home opener against North Carolina (2/20)… Maybe her best offensive game of the year came in Orlando with a 3-for-3 game with three runs and seven RBI as she hit her first career home run, a grand slam, in a win over Lehigh (2/25)… Hit a huge two-out, two-run home run to tie the game and set up the eventual series opening win over No. 2 Tennessee (3/23)… Batted 2-for-3 with a run and double in a win over Missouri… (4/20)… Went 2-for-3 with a run in the regional championship win over Liberty to send the Gamecocks to their second-ever super regional… Named SEC Freshman of the Week twice (first Gamecock to achieve the honor more than once)… Named to the All-SEC Freshmen and Defensive Teams.

HIGH SCHOOL:
A four-year letter-winner in both softball and basketball at Calhoun High … Tallied 224 RBI, 32 home runs and 69 doubles in her high school career for the Yellow Jackets … Gained the 2015 and 2016 Georgia Dugout Club’s AAA Player of the Year honor after posting 19 home runs and 78 RBI during her senior campaign … Hit .520 and added 15 doubles in her senior year, also claiming the Georgia Athletic Coaches Association Class AAA Player of the Year award … Hit .529 with 28 doubles and 64 RBI as a junior … Won three straight state titles and finished runner up in 2016 … Set new Georgia state records with 78 RBI, while her 28 doubles and 19 home runs in separate years set new Calhoun records … Also named Region 6 AAA Player of the Year in 2016 as well as all-county player of the year honors by the Rome News-Tribune … Recognized on the American Family Insurance All-USA Second Team after her junior season … Also Best of Preps by the Chattanooga Times Free Press for her final two years … In basketball, she earned first-team all-state accolades and was named the Region 6 AAA Player of the Year … Scored over 1,000 points, breaking Calhoun’s single-season scoring record … In track, she owns the school record for pole vault as well … The Georgia Player of the Game in both basketball and softball in the Georgia/Tennessee All-Star game … The Chattanooga Time Free Press Female Athlete of the Year for 2016-17 … Played with the Atlanta Vipers travel-ball group … Member of the Beta club and the National Honor Society.