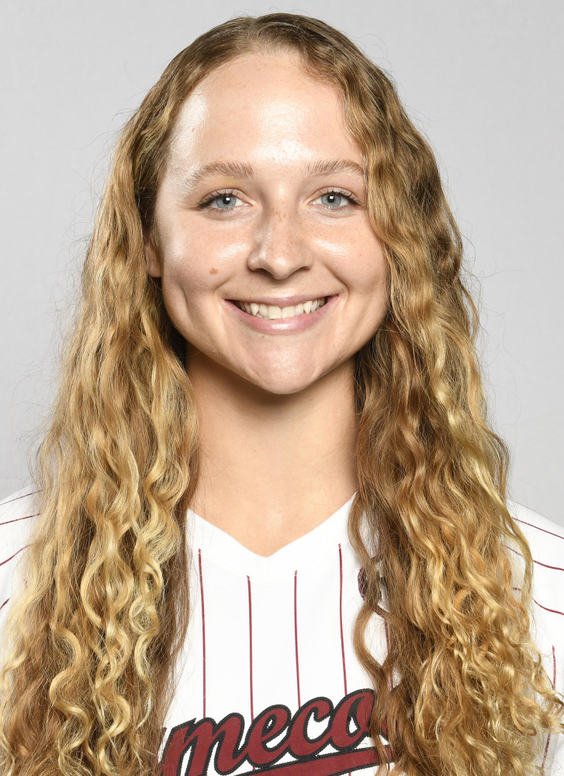 2022 (5TH):
Played and started in all 56 games in left field… Led the team with 14 home runs and 42 RBIs… Led the team with 10 multi-RBI games… Her 14 home runs tied for third all-time in a season… Nationally ranked 81st in home runs… Her 0.25 home runs per game were tied for the most in a single season… Nationally ranked 107th in home runs per game… Ranked 12th in a single season in RBIs… Her 0.75 RBIs per game were eighth all-time… Her 11 doubles were second on the squad… Reached base in 10 consecutive games at one point… Finished with nine multi-hit games… Had a pair of three-hit games… Hit a pair of home runs in a game twice… Had a career-high six RBIs against ETSU (4/8)… Also hit her second career grand slam against ETSU (4/8)… Collected 11 total bases against Florida Gulf Coast (3/5), where she went 4-for-4 with two home runs, a double, and a single.

2019 (SOPHOMORE):
Hit .156 in 34 games of action, earned 13 starts… 57 percent of all hits were home runs… Had 11 RBI and slugged .444 with eight walks on her way to a .328 on-base percentage… Shined in the opening game of the year against BYU on Feb. 7… Hit her first home run at Carolina to bring home two runs and score one of her own… Had two RBI in the win over St. John’s on Feb. 17… Had a pinch-hit home run against Auburn in the series finale on Apr. 14… Had a season-best three RBI in the second game of a doubleheader sweep of UNCG on Apr. 20… Had four multi-RBI games.

2018 (FRESHMAN AT GARDNER-WEBB):
Named a Third-Team All-American by the NFCA (At-Large First Basemen)… First-Team Mid-Atlantic Region Selection… Top-10 Finalist for the NFCA/Shutt Sports Freshman of the Year… Conference honors included the Big South Conference Player of and Freshman of the Year, First-Team All-Conference Selection and All-Freshman Team Member… Named Big South Freshman of the Week five times and Player of the Week once… Hit .438 (second-best career average in school history), was second in career home runs (23) and finished fifth in fielding percentage (.983)… Owns the Big South Conference freshman home run record for a season… Notably hit three home runs in a single game against ETSU and accounted for all six runs… Is the single season record holder at GW in RBI (71), home runs (23), extra-base hits (35), total bases (154) and slugging percentage (.963)… Also sits atop the charts for most runs scored with 50 and walks with 29… Led the conference in home runs and RBI per game.

HIGH SCHOOL/TRAVEL:
Attended St. Mary’s Catholic High School where she played for coach Jim Sewell and Megan Elliot… Was a four year starter, playing in 91 games… Totaled a career average of .478 with 150 hits, 125 RBI and 125 runs during her four years at St. Mary’s… Recorded a .594 BA with 38 hits and 7 home runs her senior year… Led the state of Maryland with 13 doubles and 42 RBI… Also had a slugging percentage of 1.156 with a 1.748 OPS, .592 OBP and 16 stolen bases… Collected an abundance of awards throughout her high school career… Her senior year she was named the MVP of the soccer and softball team, as well as Female Athlete of the Year… Tabbed an All-County, All-Conference Washington Catholic Athletic Conference, Washington Post All-Met selection her senior season as she was team captain… Played in the ASA 18u Gold Nationals… Chose Gardner-Webb over Akron and Appalachian State.

PERSONAL:
Native of Pomfret, M.D.… Born on 01/15/99… Daughter of Sara and Joe Prebble… Has one brother, Darren… Earned her bachelor’s degree in May of 2022 in sport and entertainment management.