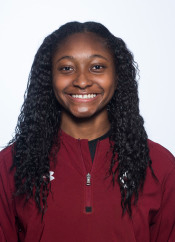 2019 (RS-JUNIOR):
Hit .293 in 55 games, drawing 50 starts in the outfield for the Gamecocks… Had 41 hits in 140 at-bats with 35 runs and 29 RBI… Slugged .514 with a .377 on-base percentage thanks in part to 20 free bases… Recorded her first hit since 2017 on Feb. 10 in a 1-for-1 afternoon against North Carolina in Mexico… Had a career-best six RBI in a 3-for-4 performance against Troy on Mar. 2 in Clearwater, Fla… Had her first multi-walk game in the second game of a doubleheader against Bryant on Mar. 13… Went 3-for-4 with two RBI in the series opener at LSU on Mar. 29… Produced again in the big game as she went 2-for-3 with two RBI in a victory over Alabama on Apr. 6… Had a season-best four putouts against Georgia on Apr. 28… Brought home 11 RBI in conference play and slugged .571… Produced a (Carolina) career-best in at-bats, runs, hits, doubles, triples, home runs, RBI, total bases, slugging percentage, walks, hit by pitches, on-base percentage, stolen bases, putouts and assists… Had 12 multi-hit games with six multi-RBI games… Had a four-game hit streak at one point as well as an 11-game reached base streak.

2017 (SOPHOMORE):
Played in 50 games, drawing 11 starts in the outfield … Scored 22 runs, being used primarily as a pinch runner and defensive replacement … Had a hit and scored a run in her debut in the Garnet and Black vs. Ohio (2/10) … Stole the first of six bases the next day against Longwood (2/11) … Scored twice, walked and stole a base in the first win vs. Indiana (2/17) … Also walked and scored twice in the Sunday win over College of Charleston (2/26) … Stole a base and scored a run in consecutive appearances in Southeastern Conference play against No. 7/5 Texas A&M (4/1) and at Mississippi State (4/7) … Connected for her first extra-base hit with a double against Charleston Southern (4/18) … Made the SEC First-Year Academic Honor Roll.

HIGH SCHOOL:
A three-time letter-winner at Cambridge High … Twice earned Region 7AAAAA Player of the Year honors and a four-time first-team all-region honoree, combined with her freshman year at Alpharetta High … Ranked as the first CHS athlete to earn all-state accolades during her junior year, gaining first-team honors … Helped the team to a runner-up finish in the GHSA Class AAAAA state tournament as a senior … Also earned two letters in track and another in basketball … Finished third in both the long jump and triple jump as a sophomore at the region meet … Ranked fifth in the Fulton County meet’s 100-meter dash … Played travel ball with the Georgia Force and the East Cobb Bullets … A member of the National Honor Society.

PERSONAL:
Lauren Ashley Stewart is the daughter of Reggie and Beverly Stewart … Has one brother, Reggie D. … Says gumbo and etoufee are her favorite foods … Majoring in visual communications with a desire to work as a sports broadcaster at ESPN.