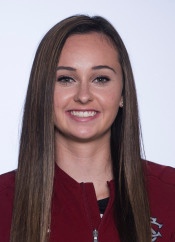 2018 (Senior): Appeared in two games during the 2018 season… Made her pinch-running debut in a win over Charleston Southern (5/2)… Scored a run in a win at Kentucky to help seal a third-place SEC finish for the Gamecocks (5/6).


2016 (SOPHOMORE): Made six relief appearances, tallying 5.1 innings of work … Struck out eight batters in that action, including three against Winthrop (2/21) and four against Southern Utah (2/26), both of those two-inning appearances … Gained a spot on the Southeastern Conference Spring Academic Honor Roll and named a National Fastpitch Coaches Association Scholar-Athlete.

2015 (FRESHMAN): Made eight appearances, seven out of the bullpen … Picked up one save in 7.2 innings of work … Ended the one-hitter vs. Appalachian State (2/13) with an inning of work, striking out one … Her save came with three innings of work vs. Charleston Southern (2/27), where she struck out three while allowing one earned run … Started the third game of the series against No. 9/15 Tennessee (3/15) … A member of the SEC First-Year Academic Honor Roll and also honored as a NFCA Scholar-Athlete.

HIGH SCHOOL: Played at Esperanza High School … Three-time Century League Pitcher of the Year and team MVP … Started 27 games as a senior, going 23-4 with a 1.29 ERA, striking out 283 while walking 42 in 174 innings … The year before, sported a 1.11 ERA in 22 starts … All marks set new standards at Esperanza … As a junior, struck out 214 against 22 walks in 141 innings, going 16-4 with a 1.14 ERA … During her sophomore campaign, she fanned 165 and walked 28 … Helped Esperanza to four-consecutive league titles … Two-time MaxPreps All-American (sophomore in 2012, overall second team in 2014) … All-state by CalHiSports.com on three occasions (1st team 2013, 2nd team 2012 and ’14) … Three-time All-Orange County first team by the Orange County Register … Also a scholar-athlete for four years … Played with the SoCal Athletics travel-ball team, winning two Premier Girls Fastpitch national titles.

PERSONAL: Hayley Elizabeth Copeland is the daughter of Wayne and Martha and the sister of Blake … Lists sleeping as a hobby and Mike Trout as her favorite athlete … Says winning two national titles is her greatest thrill … Majoring in business