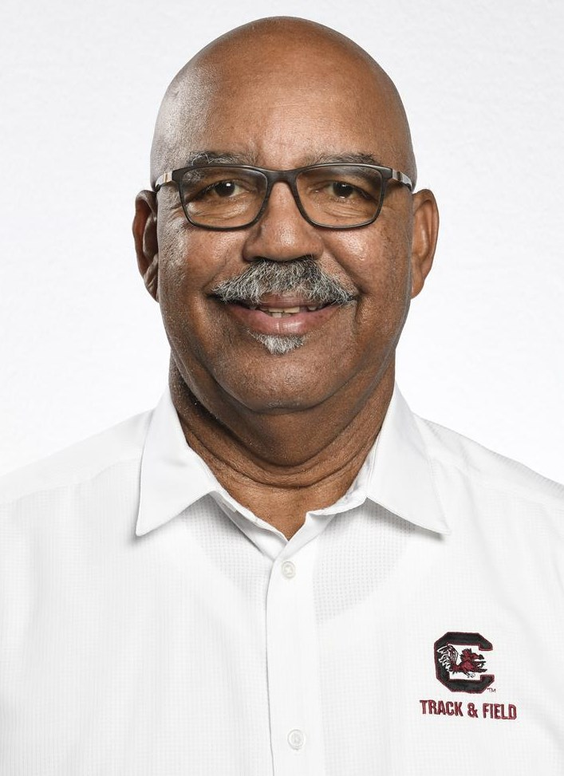 Curtis Frye will enter his 26th year at the helm of the South Carolina track and field and cross country programs in 2021-22 following a successful 2020-21 year. Over that time, Frye has established a program that is regarded as one of the nation’s elite. Frye has coached or overseen over 60 NCAA champions, 121 SEC champions, 20 Academic All-Americans and more than 500 NCAA All-Americans.

Frye oversaw Rachel Glenn’s championship season that got capped off with the freshman winning a national title in the women’s high jump. She was also the national high jump runner-up indoors.

Unfortunately the 2020 season was cut short due to the COVID-19 pandemic that shook the NCAA across all sports. The Gamecocks qualified six events to the 2020 NCAA Indoor Championships before the meet was cancelled the day prior to the first day of competition. Later the USTFCCCA named all qualified student-athletes as All-Americans, adding 11 All-American distinctions for Curtis Frye’s program.

Frye also coached his 17th Academic All-American in 2018, as Allie Mueller was honored as a Google Cloud CoSIDA Second-Team selection. As a junior, Mueller finished with a 4.0 GPA in pharmacy and ranked as one of the SEC’s top-15 middle distance runners.

In 2017, Frye’s vision of a new facility for Carolina Track & Field came to fruition with the opening of Sheila & Morris Cregger Track. The world-class facility, featuring a Mondo surface, nine lanes, and separate areas for throws, jumps and pole vaulting, immediately shot to the top of the list as the finest home facility in collegiate track & field.

Dicks set a school record in her event at the NCAA indoor meet, one of five new Gamecock marks achieved by Frye’s student-athletes in 2017. Ncincilili Titi (200m), Markus Leemet (decathlon) and Tye Williams (high jump) set new Carolina outdoor records on the men’s side, as did Rougui Sow (long jump) on the women’s side. Each of the new record holders also earned first-team All-America status in 2017.

The 2016 Gamecocks continued to make their mark as one of the top programs in collegiate track & field. Nakita Gray won the SEC Indoor Championship in the high jump, and Erika Rucker added to Frye’s rich academic legacy by earning Academic All-America accolades. In total, 15 Gamecocks ended the season as All-Americans.The Gamecock men earned their highest NCAA finish since 2012, and the Gamecock women finish in the top-25 a the NCAA Outdoor meet for the second-straight season.

Following the 2016 collegiate season, Frye served as an assistant coach for the United States national team at the 2016 Rio Olympics. With Frye as one of their leaders, Team USA earned 32 track & field medals in Rio, including 13 gold medals.

The 2015 was an exciting one for the program, which celebrated its best finish at outdoor nationals for the women since 2007 and 2010 for the men. The program crowned a national champion in Jeannelle Scheper (high jump) and saw, between indoor and outdoor, seven individuals and one relay team earn an All-America certificate. In addition, Frye’s dream of a brand new track facility was realized with the ground breaking of the Morris and Sheila Cregger Track, a fitting new home for Carolina’s hall of fame head coach.

In December of 2013, Frye’s significant impact on the history of track and field at the collegiate, national and international levels through his coaching and the legacies of his student-athletes was recognized as he was enshrined in the U.S. Track & Field and Cross Country Coaches Association (USTFCCCA) Hall of Fame. Earlier in the fall, Frye was also inducted into the Sandhills Community College Hall of Fame in Pinehurst, N.C. He is also a former President of the USTFCCCA and is currently a non-voting member of the organization’s Board of Directors.

In October 2008, Frye was bestowed the Order of Ikkos Medallion, presented by the United States Olympic Committee. A special order reserved for the coach of an Olympic or Paralympic medalist, Frye received the honor after coaching Jerome Singleton Jr. to a silver medal in the men’s 100-meter dash at the 2008 Paralympic Games in Beijing. Later on that school year, he received the Order of the Palmetto, the highest civilian honor awarded by the Governor of South Carolina to recognize lifetime achievement and service to the state.

Frye has coached an NCAA champion in all but seven years since taking over the program in 1996, including coaching LaKya Brookins to the 60-meter dash indoor title in 2009 en route to being named USTFCCCA Southeast Region Athlete of the Year for both the indoor and outdoor seasons. Brookins followed up her performance in 2009 with a second 60-meter dash indoor title in 2011. In addition, Frye has coached an SEC champion in 20 of the 22 seasons he has been at South Carolina.

One of the most well-respected coaches in the country, Frye brought South Carolina its first team NCAA championship in any sport when his women’s team captured the 2002 NCAA Outdoor Championship crown. Frye is a three-time United States Track Coaches Association (USTCA) National Coach of the Year, taking home the 1999 and 2002 women’s outdoor honors and the 1999 men’s indoor honors. In taking home the men’s indoor and women’s outdoor coach of the year honors in 1999, he became the first person in the history of the USTCA to win the award indoors and outdoors in the same year. In 2001, he earned the prestigious Nike Coach of the Year award and was also named the 1997 USOC Track & Field Coach of the Year. Frye is also a three-time SEC Coach of the Year with the honor coinciding with his three women’s outdoor conference championships in 1999, 2002 and 2005. At the beginning of the 2019 season, Frye was awarded the USATF’s Education Standard for his past work with the U.S. national team.

During his tenure at South Carolina, Frye has coached 14 SEC Athletes of the Year, the most recent being Ncincilili Titi, who was named the 2018 SEC Scholar-Athlete of the Year (outdoor). He has also coached five national athletes of the year in Hastings (2007-overall), Demetria Washington (2002-indoor), Lashinda Demus (2002-overall), Terrence Trammell (2000-outdoor) and Miki Barber (2000-outdoor). Demus was acknowledged by Track & Field News while the United States Track & Field & Cross Country Coaches Association (USTFCCCA) honored the other four recipients.

In his career, Frye has coached 28 Olympians who have garnered 14 medals at the Olympic Games. Nine of his former student-athletes competed at the 2008 Olympic Games in Beijing, six of them as first-time Olympians. Natasha Hastings earned a gold medal as a member of the USA 4x400m relay team in Beijing and repeated as a gold medalist at the 2016 Rio Games. In addition to 2016, Frye served as an assistant coach for the 2004 USA Olympic women’s track team with responsibilities that included working with the sprinters and the relays. He also accompanied his former athletes to the 2000 Sydney Olympics. Frye’s athletes won three gold medals in 2004 by Tonique Williams-Darling (Bahamas-400m), Otis Harris (USA-4x400m relay) and Aleen Bailey (Jamaica-4x100m relay). At the London 2012 Olympics, the total increased by two as Demus (400m hurdles) and Richardson (110m hurdles) claimed silver for the United States.

Frye spent the summer of 2015 coaching Team USA in Russia. First, the Gamecock traveled to Kazan as the Team USA men’s head coach for the World University Games. A short time later, he traveled to Moscow as an assistant coach for the IAAF World Championships to work with the men’s sprints and hurdles. The sprint and hurdle group medaled in every event of the meet, capturing three gold medals.

Never one to sit on the sidelines, Frye established the Frye Foundation after his family was devastated by diabetes. The foundation is dedicated to assisting those dealing with diabetes and mental illness. Each year, they host a 5K run/walk as well as a golf tournament and silent auction.

Hired at South Carolina on July 29, 1996, Frye came to Columbia after serving as assistant head coach at North Carolina for four years. During his tenure at UNC, he was a part of 13 ACC championship teams.

Prior to his stint with the Tar Heels, Frye was an assistant coach at Florida from 1988 to 1992. While with the Gator program, he coached three NCAA individual champions and one relay champion team. In total, 29 All-America certificates were earned while Frye was in Gainesville.

From 1984 to 1988, Frye was an assistant coach for N.C. State, aiding the Wolfpack to four conference championships. He was instrumental in leading State to 27 All-America honors, four individual NCAA second-place finishes and 37 conference champions.

Frye began his coaching career as an assistant at his alma mater, East Carolina, in 1974. He also served as head coach for the men’s soccer team and was director of facilities. Frye took a break from the collegiate ranks from 1979 to 1984 when he was head track and field coach for Douglas Byrd High School in Fayetteville, N.C.

Frye and his wife, Wilma, have three children: Crystal, C.J. and Curtrell.