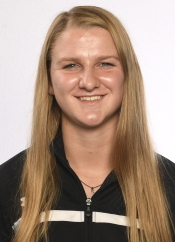 Indoor: Did not compete for the Gamecocks.

Indoor: Competed four times in the mile run… dropped her time in all four appearances, finishing the year with an eighth-place finish at the USC Indoor Open in a time of 5:11.76.

Indoor: Did not compete

Ran at Coeur d’Alene High, making the Idaho State Cross Country Championships four-consecutive years… Tallied three-straight top-10 finishes at the state meet, placing a personal-best sixth as a sophomore… Earlier that year, compiled a 18:21.5 time to finish second in her district meet… Took top-60 placements three times in the Nike Cross Country Northwest Regionals… Her 19:37 in the 2014 Nike Cross Nationals placed her 130th… The Division I Cross Country Athlete of the Year… Outdoors, ranked eighth in the 2014 Idaho State 4A/5A Championships with a top time of 11:27.82 at 3200m… Finished sixth in the 2016 state meet at 1600m with a personal record of 5:04.75… A four-time participant in the Idaho 4A/5A state meet at 1600m… Also placed in the top 10 twice at 800m outdoors in the state finals… Helped her team to its second and third consecutive state titles as a freshman and sophomore… Earned her school’s Athlete of the Month honors on five different occasions… In the classroom, she earned two academic letters and was a four-year Renaissance student… Named 2017 Scholar-Athlete at CdAHS… Graduated as an AP Scholar with Honors and was her class’s salutatorian.

The daughter of Michael and Kristin Conway… Has one brother, David… Chose South Carolina over Butler because of the great opportunities for academic achievement and saw a way to give back to the community while in school… She also said South Carolina “felt like home”… Majoring in psychology and Spanish.