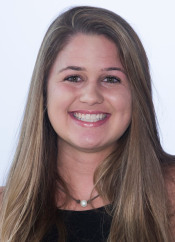 Competed five times for the Gamecocks during the season, posting her best 5000m time at the Royals XC Challenge in a time of 19:09.80… Finished in a time of 23:20.80 at the East Carolina Pirate Invitational, the first 6000m race of the season… Competed at the SEC XC Championships in a longer 6000m course… Had her best finish at the Carolina Challenge, finishing in 22nd.

Indoors: Ran the 5000m twice, finishing 11th at the Clemson Invitational and 19th at the Tiger Paw Invitational.
Outdoors: Competed twice in the 3000m and once in the 5000m … Finished 16th at the Gamecock Invitational 5K, her top placement of the outdoor season.

Posted four finishes on the year … Ranked 38th overall in her collegiate debut in the Carolina Challenge with her top 5K time of 20:27.80 … Ranked 23rd among Division I competitors in the 33rd Winthrop/adidas Invitational (20:39.6) … Helped the Gamecocks win the two-mile Gamecock Invitational, finishing fifth in 12:41.92 … In her only 6K, she clocked a 24:39.0 in the Crimson Classic.

Ran for Green Hope High School … Her best event in outdoor track was the 3200m run, where she finished 10th last year in the North Carolina High School Athletic Association 4A Championship … Tallied her best time at that distance as a junior in the adidas Raleigh Relays (11:03.01) … She finished ninth in the 2015 NCHSAA 4A Indoor meet with a time of 11:18.89 before ranking eighth as a senior … In the 5K, she finished second in the NCTCCCA Meet of Champions on the track at 18:25.34 … A standout in cross country who finished 21st as a junior and sixth as a senior in North Carolina … Ranked in the top 40 in both of the last two years in the Nike Cross Southeast Regionals, posting her top time in 2014 of 18:26 in that meet.

Daughter of Charles and Donna Adams … Has one younger sister, Mackenzie … Majoring in exercise science.