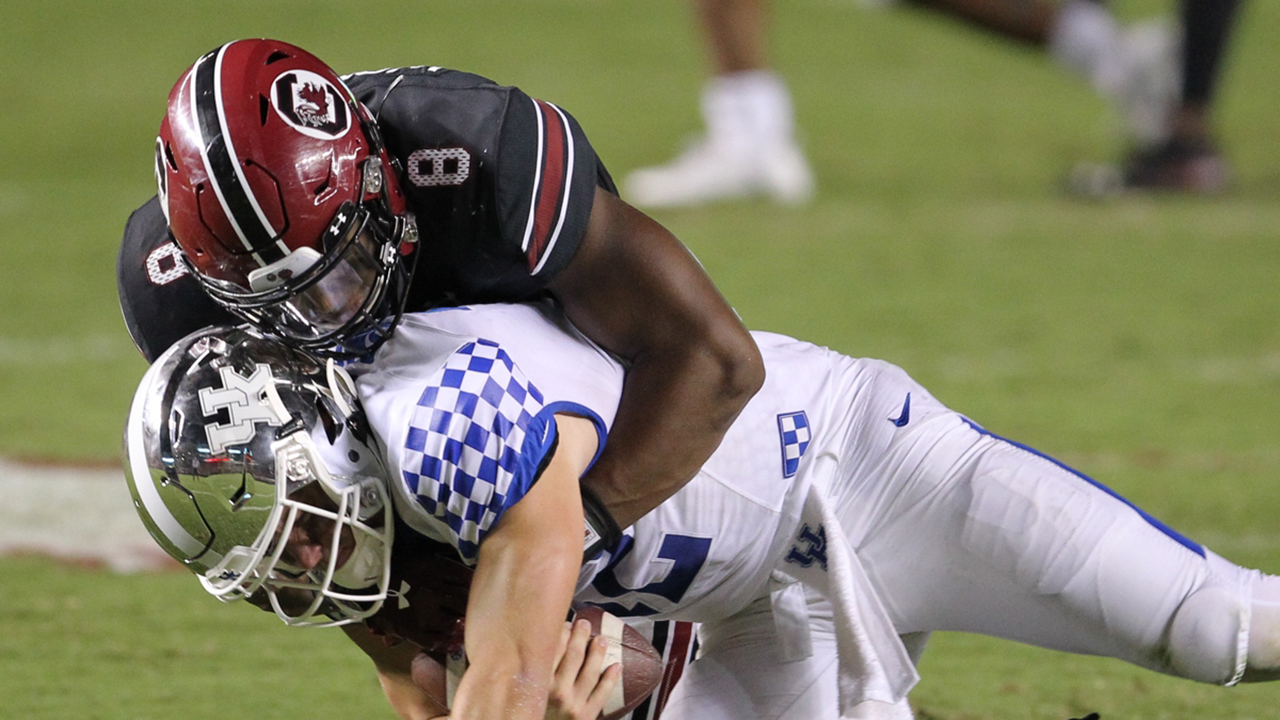 COLUMBIA, S.C. (AP) — Rico Dowdle and Tavien Feaster like sharing the football, especially when it leads to South Carolina victories like this.

Dowdle and Feaster, the Gamecocks’ two senior tailbacks, both ran for more than 100 yards and accounted for three touchdowns as South Carolina (2-3, 1-2 Southeastern Conference) snapped a five-game series losing streak to Kentucky with a 24-7 victory Saturday night.

Many wondered how Dowdle and Feaster, both dynamic runners, would manage in the same backfield. They gave an emphatic answer against Kentucky.

“He pushes me to be better. I push him to be better,” Dowdle said. “I think it’s working pretty well.”

The Gamecocks also ended a run of six consecutive losses to Power Five opponents. And they did it just the way coach Will Muschamp wanted with an effective running attack.

Dowdle surpassed the century mark for the second time in three games. But Dowdle appeared to injure his left leg less than two minutes into the fourth quarter and needed support to make the sidelines as the crowd chanted ”Rico, Rico.”

Dowdle said his ankle got rolled, but he expected to be OK when South Carolina plays at No. 3 Georgia in two weeks.

Feaster gave South Carolina a second 100-yard rusher with 107 yards (67 in the final period) and touchdown runs of 2 and 19 yards. It’s the first time the Gamecocks had a pair of 100-yard rushers in SEC play since 2001 when Andrew Pinnock and Derek Watson did it in a win over Vanderbilt with Lou Holtz as coach.

Feaster won a pair of national titles with Clemson, but wanted a new setting where he could showcase the skills that made him a five-star prospect coming out of high school. It had been slow going at times for South Carolina’s run game this season until the breakthrough against Kentucky.

The win “proves a lot,” Feaster said. “Just that hard work and dedication will take you far. Even if the results weren’t immediate, just keep pushing, keep fighting.”

The Gamecocks certainly did, pressuring Kentucky quarterback Sawyer Smith throughout and giving up just 111 yards total the first three quarters. The Wildcats broke up a shutout on Chris Rodriguez’s 2-yard scoring run with 2:32 left in the game.

“This was a commanding win and that’s what we needed going into an off week,” Muschamp said.

The Wildcats had averaged better than 200 yards rushing against South Carolina during the win streak. They managed just 115 yards on the ground in this one.

Kentucky coach Mark Stoops said Smith was dealing with injuries and struggled to move the ball.

“We need to hit the reset button and get some guys healthy,” he said. “And get some of these mistakes that we’re making corrected.”

Rico Dowdle gave the Gamecocks a 17-0 lead just 1:01 into the second half with a 30-yard touchdown run. Dowdle also moved over 2,000 career yards rushing in the Kentucky win.

The Gamecocks have the first of their two bye weeks next weekend and will then travel to Athens, Ga., to face Georgia Saturday, Oct. 12. Time and television network will be announced on Monday.