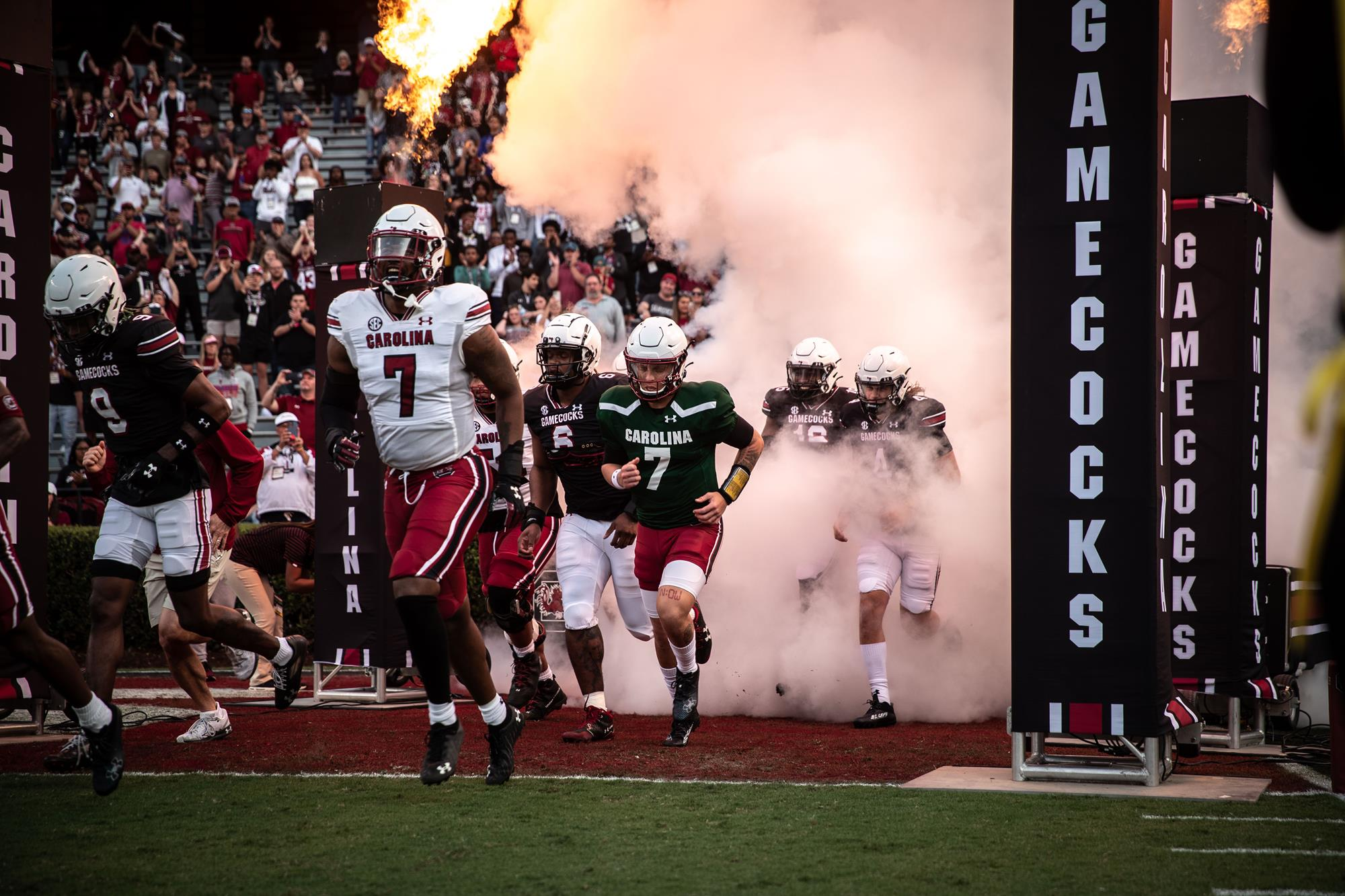 COLUMBIA, S.C. — The Garnet team, led by transfer quarterback Spencer Rattler, posted a 20-13 win over the Black team, led by Luke Doty, as the University of South Carolina played its annual Garnet & Black Spring Game in front of an announced attendance of 20,671 on Saturday night at Williams-Brice Stadium in Columbia.

Rattler completed 8-of-10 passes for 79 yards, while Doty was 7-of-10 for 85 yards with a touchdown. Juju McDowell was the game’s top rusher, carrying six times for 57 yards, pacing the Garnet squad. MarShawn Lloyd led the Black team with eight carries for 40 yards. Overall, the teams combined for 456 yards on 92 plays.

After a quick three-and-out on the game’s first possession, the offenses for both teams began to click, putting together scoring drives on each of the next four possessions.

The Black team got on the board first, when Mitch Jeter boomed a 47-yard field goal to put his squad on top, 3-0. Jeter is making a push to replace the school’s all-time leading scorer in placekicker Parker White, who was honored between the first and second quarters with his name and records added to the spiral walkways at Williams-Brice Stadium. The key play in the drive was an eight-yard run by Lloyd on a fourth-and-two when it looked like he might be stopped in the backfield for a loss.

The Garnet squad came right back with a game-tying field goal on the ensuing possession. Rattler showed off his prolific arm with a 30-yard strike to Xavier Legette on the drive’s opening play. McDowell did much of the work after that, carrying twice for 22 yards to put his team into scoring position. The drive stalled before Alex Herrera, who is competing with Jeter for the number one placekicker role, booted a 40-yard field goal to knot the score at 3.

Chad Terrell, who moved from wide receiver to tight end at the start of the spring drills, capped a nine-play, 75-yard drive on Black’s next possession when he caught a swing pass from Luke Doty, broke free, and took it to the house for a 31-yard score. The play put the Black team back on top 10-3. Terrell finished the night with a game-high four catches for 49 yards.

With the second quarter winding down, the Garnet team put together a 15-play scoring drive, culminating in a one-yard touchdown run from former Wake Forest standout Christian Beal-Smith. The Black defense appeared to have Garnet in trouble early in the drive but, facing a third-and-18 from its own 30, Rattler found Antwane Wells Jr. on the sidelines for 16 yards, then McDowell scampered for eight more on a fourth-and-two, extending the drive. Later, Garnet faced a third-and-goal situation from the 11, but a pass interference call kept the drive alive, and two plays later, Beal-Smith found paydirt with just 10 seconds left before intermission, sending the teams to the locker room knotted at 10.

Backups dotted the field for the second half with Colten Gauthier taking over the quarterback reins for the Black team and freshman Braden Davis steering the ship for the Garnet.

Walk-on Joseph Byrnes picked off Gauthier at midfield on the first drive of the third quarter, putting the Garnet team in plus-territory to open the second half. Six plays later, Davis found tight end Traevon Kenion on a crossing pattern for a 25-yard touchdown pass, putting Garnet back on top, 17-10, a lead they would not relinquish. Kenion hauled in three passes for 46 yards on the night.

After forcing a punt, Garnet got the ball back and put together another scoring drive that would give them a two-score lead. The key plays were back-to-back completions from Jake Helfrich to Payton Mangrum for 34 yards and Helfrich to Kenion for 16 more. Jeter kicked a 34-yard field goal to give Garnet a 10-point advantage at 20-10.

Black would answer back with a 33-yard field goal from Herrera to pull to within seven at 20-13, but after getting the ball back after a defensive stop, Byrnes intercepted Gauthier for a second time in the final minute, preserving the win for Garnet.