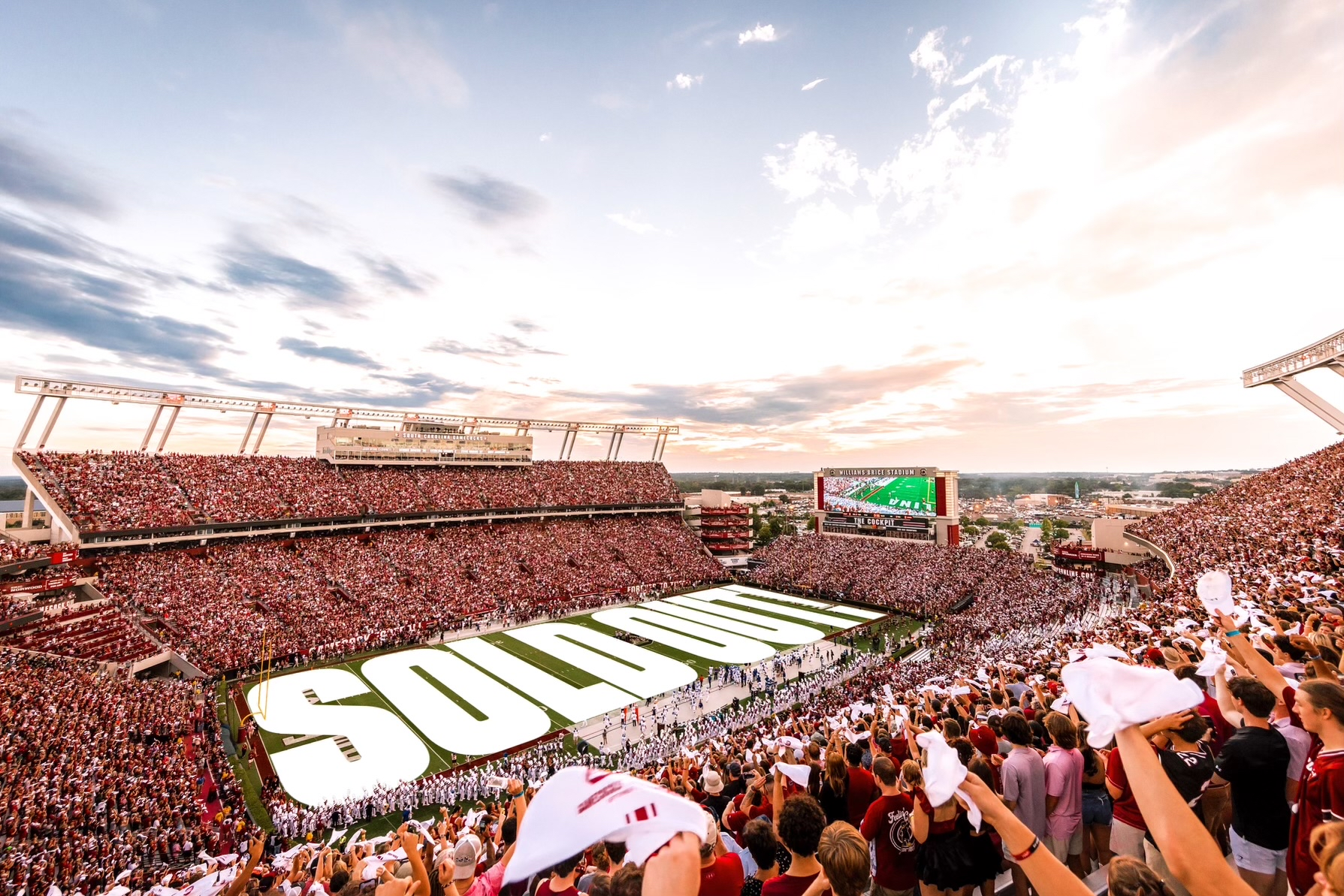 The South Carolina Gamecocks (1-1, 0-1 SEC) return home for the first game of a three-game homestand when they host the nation’s top-ranked team according to the Associated Press, and the defending national champion Georgia Bulldogs (2-0, 0-0 SEC) on Saturday, Sept. 17. Game time from Williams-Brice Stadium (77,577) is set for noon ET.

For the second week in a row, the Gamecocks will have their game televised nationally on ESPN. Sean McDonough will handle the play-by-play with Todd Blackledge providing the color commentary and Molly McGrath on the sidelines for the mothership. ESPN Radio also covers the Gamecocks with a national broadcast for the second-straight week with Mike Couzens on the call and Max Starks serving as the analyst. Mike Peasley will again handle the sideline reports for the national radio broadcast.

The Gamecocks come into the contest with a 1-1 mark, defeating Georgia State by a 35-14 count in the season and home opener on Sept. 3, then falling at No. 16/17 Arkansas last week by a 44-30 score in the SEC opener for both squads. Georgia, which takes over the No. 1 A.P. ranking this week, has yet to be tested this season, rolling to a 49-3 victory over nationally-ranked Oregon, then shutting out an overmatched Samford squad last week in Athens, 33-0.

For the third-straight week, South Carolina head coach Shane Beamer will be facing a former coaching colleague. Coach Beamer was on Kirby Smart’s staff at Georgia in 2016 and 2017. The 2016 squad went 8-5 and defeated TCU in the Liberty Bowl. The 2017 Bulldogs defeated Oklahoma in the Rose Bowl, then lost to Alabama in the CFP Championship game by a 26-23 score to finish 13-2. Last week, Coach Beamer faced Arkansas head coach Sam Pittman. Pittman was also part of the 2016 and ‘17 staffs at Georgia. In the season opener, Coach Beamer went head-to-head with Georgia State head coach Shawn Elliott. Both Beamer and Elliott were on the 2010 South Carolina staff under head coach Steve Spurrier.

This is the 75th meeting between these two bordering flagship state universities. Georgia leads the all-time series by a 53-19-2 margin, including a 22-10-2 advantage in Columbia and a 30-9 mark in Athens. Since becoming SEC Eastern Division rivals in 1992, the Bulldogs own a 20-10 lead in the series, including 10-5 mark in Columbia.

CLOSER OF LATE: While Georgia has won six of the last seven meetings between these two schools, the Dawgs hold just a 7-5 advantage in games played since 2010. Carolina won three-straight from 2010-12, its longest winning streak in the series, and won again in 2014 and 2019. Georgia countered with a win in 2013 and four-straight from 2015-18 before winning each of the last two contests.

THE LAST TIME THEY MET: JT Daniels completed 21-of-31 passes for 303 yards and three touchdowns and Georgia’s fearsome defense nearly made it three-straight games without allowing a TD as the No. 2 Bulldogs ran away with a 40-13 victory over South Carolina on Sept. 18, 2021 in Athens. Josh Vann logged a career-best 128 yards receiving for the Gamecocks, including a 36-yard touchdown reception in the fourth quarter.

THE LAST TIME THEY MET HERE: The No. 13/10 Georgia Bulldogs put up 21 first-quarter points and never looked back in a 45-16 win over South Carolina on Nov. 28, 2020. Georgia did most of the damage on the ground, rushing for 332 yards on 46 carries, a 7.2-yard average. True freshman Luke Doty made his first career start and responded by connecting on 18-of-22 passes for 190 yards with a touchdown and an interception. With Shi Smith sidelined, tight end Nick Muse stepped up with the best game of his career, an eight-catch, 131-yard, one-touchdown performance.

THE LAST GAMECOCK WIN: In the high point of the 2019 season, the Gamecocks went into Athens on Oct. 12 and knocked off the No. 3/3 Bulldogs by a 20-17 mark in double-overtime. Israel Mukuamu was the star of the game, intercepting three Jake Fromm passes, including a 53-yard pick-six in the upset win. Parker White connected on a 24-yard field in the second overtime, before Rodrigo Blankenship missed from 42, providing the winning score. Georgia outgained Carolina 468-297 on the afternoon, but four turnovers proved costly for the Dawgs. The win matched the best road win for Carolina in school history and the Gamecocks were recognized as the National Team of the Week.

BEEN HERE, DONE THAT: Georgia enters this week’s game ranked atop the Associated Press poll. Four of South Carolina’s top eight wins in school history according to the A.P. have come against Georgia, with three of those coming in Williams-Brice Stadium.

BEAMER SEES RED: First-year South Carolina head coach Shane Beamer served on Kirby Smart’s staff at Georgia as the tight ends coach and special teams coordinator in 2016 and ‘17. This is the eighth time Coach Beamer has been on the sidelines for Carolina-Georgia. He has been on the winning sideline in four of the previous seven games.

GEORGIA ON MY MIND: Carolina running back Lovasea Carroll was a defensive back on the Georgia squad last season. Gamecock offensive line coach Greg Adkins served on the Georgia coaching staff from 1996-2000. DFO George Wynn started for three years at Georgia and served as a team captain as a senior, graduating in 1992.

OLD FRIEND ALERT: Will Muschamp returns to his old stomping grounds. He served as the Gamecocks’ head coach from 2016-20, posting a 28-30 record. He now serves as UGA’s co-defensive coordinator. Bryan McClendon and Mike Bobo, who both worked on Muschamp’s staff at USC, now work at UGA, with McClendon serving as the passing game coordinator and Bobo in quality control. All three are UGA grads.

BEATING A RANKED OPPONENT: South Carolina’s last win over a ranked opponent came in the 2020 season when they knocked off 15th-ranked Auburn in Columbia by a 30-22 score. Carolina is just 1-9 in their last 10 games against a team ranked in the Associated Press Top-25. Shane Beamer is 0-3 as a head coach against Top-25 teams, falling at No. 2 Georgia and at No. 17 Texas A&M during the 2021 campaign before losing at 16th-ranked Arkansas last week in Fayetteville.

TOUGH SLEDDING: The Gamecocks dropped a 44-30 decision at No. 16 Arkansas last week. That contest started a stretch in which the Gamecoocks will be playing seven of 11 games against teams currently ranked in the nation’s Top-25, including four in the Top-10. In addition to Georgia being ranked No. 1, this week’s Associated Press Top-25 includes Clemson (5), Kentucky (9), Arkansas (10), Tennessee (15), Florida (18) and Texas A&M (24).

ABOUT LAST WEEK: The Gamecocks traveled to Arkansas last week for the first time since the 2013 season and suffered a 44-30 setback to the No. 16/17 Razorbacks, snapping a three-game winning streak over the Hogs. Arkansas used a punishing ground attack that totaled 295 rushing yards on 65 carries en route to the win. The Hogs scored touchdowns on each of their first three possessions to open up a 21-3 advantage. The Gamecocks clawed back into it to make it 21-16 after three quarters, but Arkansas put 23 fourth-quarter points on the board to seal the win.

WELLS RUNS DEEP: Antwane Wells Jr. turned in the best game of his career at Arkansas. The junior transfer from James Madison caught eight passes on 10 targets for a career-high 189 yards and one touchdown. He had receptions of 64- and 62-yards in the contest.

BEST IN SHOW: Antwane Wells Jr.’s 189-yard receiving performance at Arkansas tied for the 10th-best single-game performance in school history and the most receiving yards in a game since Deebo Samuel went for 210 at Clemson in 2018.

THE DANDY DOZEN: Spencer Rattler’s 377 yards passing at Arkansas was the 12th-best single-game mark in school history and the most since Jake Bentley lit up Clemson for a school-record 510 yards during the 2018 season. Here are the top-12 passing games in school history:

PLAYING SHORT-HANDED: The Gamecocks went into Fayetteville without the services of two key members of their secondary, safety R.J. Roderick and nickel David Spaulding, both of whom were injured against Georgia State and did not make the trip. During the Arkansas contest, Carolina lost the services of a defensive starter at all three levels – Edge rusher Jordan Strachan linebacker Mohamed Kaba and defensive back Cam Smith.

WHAT ABOUT THE OPENER?: Carolina opened the second year of the Shane Beamer Era with a 35-14 win over Georgia State on Sept. 3. A sold-out crowd of 78,297 was on hand to see Spencer Rattler in his Gamecock debut, but it was Pete Lembo and his special teams units that stole the show, it what arguably was the best single-game special teams performance in school history.

EVERYBODY LEMBO: Special teams coordinator Pete Lembo slept well after the season opening win over Georgia State, as his units produced two blocked punts for touchdowns, was successful on a pair of field goals beyond 50 yards, had seven punts that averaged over 49 yards with a long of 79 and no return yardage, a successful fake field goal that led to a touchdown, no kickoff return yardage allowed and 69 punt return yards gained.

FEELS LIKE THE FIRST TIME: Six players made their first start for the Gamecocks in the season opener versus Georgia State, but only two, MarShawn Lloyd and Alex Huntley, were making their first collegiate start overall. Spencer Rattler, Devonni Reed, Austin Stogner and Jordan Strachan made their first starts for Carolina, but had made starts at their previous stops. Safety Nick Emmanwori became the first true freshman from the 2022 signing class to earn a start when he was in on the first snap at safety at Arkansas.

A LITTLE HISTORY: 2022 marks the 129th season of intercollegiate football at the University of South Carolina, dating back to 1892. It is the 116th-consecutive year in which Carolina has competed on the gridiron. The University did not field a team in either 1893 or 1906. Carolina owns an all-time record of 622-602-44, a .508 winning percentage.

NO BUENO: Sixth-year tight end Chad Terrell suffered an ACL injury during the Gamecocks’ first scrimmage of preseason camp and will miss the entire 2022 season. It was the third ACL Terrell has suffered during his Gamecock career.

DOWN AND OUT: The Gamecocks lost a pair of defensive starters in the Arkansas contest. Both defensive end Jordan Strachan and linebacker Mohamed Kaba suffered ACL tears in the game and will miss the remainder of the season.

SEEING DOUBLE: Redshirt senior Wyatt Campbell is an offensive lineman by trade and wears No. 68, but has also been used at tight end where he dons No. 80.

UP NEXT: The Gamecocks step out of conference next week when they host the Charlotte 49ers at Williams-Brice Stadium. It will be the first time the two schools have gotten together on the gridiron.