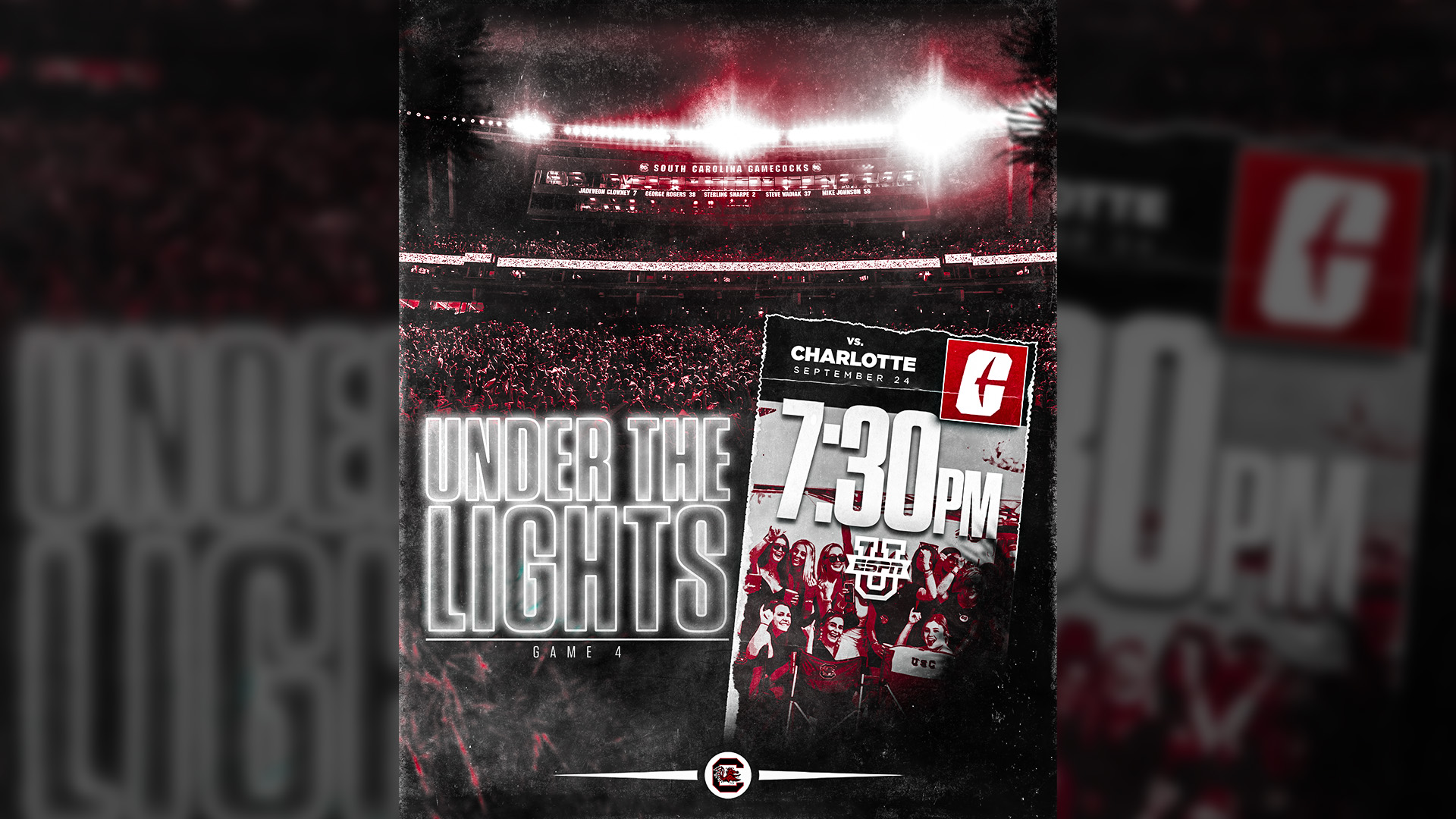 The South Carolina Gamecocks (1-2, 0-2 SEC) are back in action on Saturday, Sept. 24, when they step out of conference for the middle game of a three-game homestand as the Charlotte 49ers (1-3, 0-1 Conference USA) make their first trip ever to Columbia and Williams-Brice Stadium (77,557). Game time is set for 7:30 pm ET.

The Gamecocks come into the contest with a 1-2 mark, defeating Georgia State by a 35-14 count in the season and home opener on Sept. 3, before suffering a pair of setbacks to ranked opponents, first falling at No. 16/17 Arkansas by a 44-30 score in the SEC opener for both squads, then dropping a 48-7 decision to top-ranked Georgia last week in Columbia. Each of the Gamecocks’ first two home games of the season were sold out.

The Gamecocks have dropped two-straight after a season-opening win, while Charlotte won last week for the first time in four tries this season, snapping a six-game losing streak that extended back to 2021. South Carolina has not dropped three in a row since the end of the 2020 season when they lost their final six games.

Georgia State provides a bit of a measuring stick, as both South Carolina and Charlotte have played Shawn Elliott’s Panthers from Atlanta this season. South Carolina used a pair of blocked punts that were returned for touchdowns to pull away from Georgia State on Sept. 3 in the season opener for both squads and the home opener for the Gamecocks. Charlotte traveled to Atlanta last Saturday where they escaped with a 42-41 win, scoring the winning touchdown with just seconds remaining. Chris Reynolds threw for 401 yards and five touchdowns, including the final one with just 17 seconds left in the contest to pull out the victory and send Georgia State to its third loss in as many games. 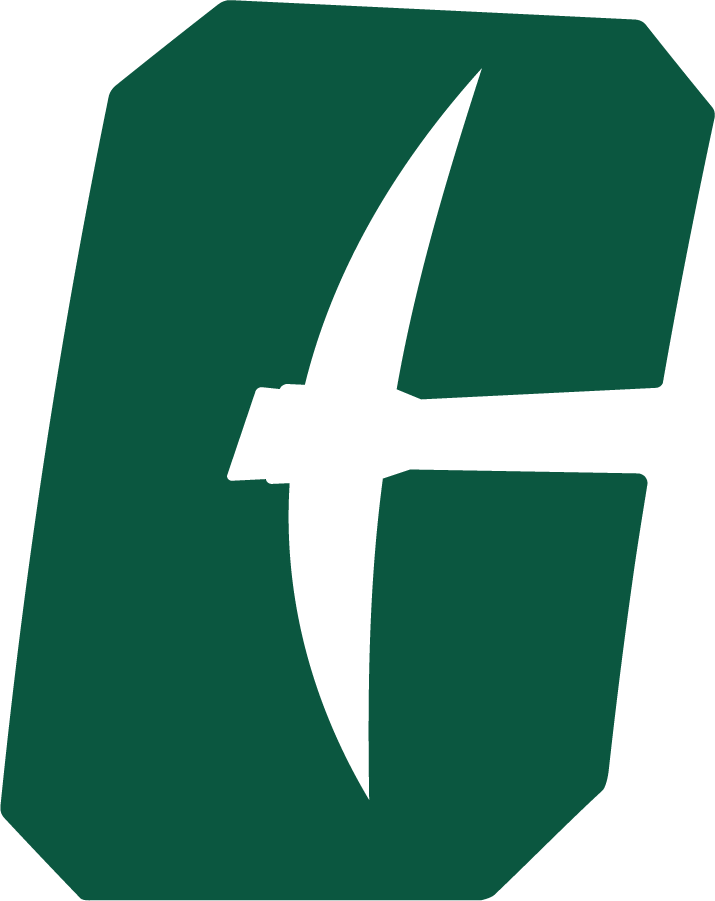 This is the first-ever gridiron meeting between these two schools that are separated by 107 miles on Interstate 77.

WHO ARE THESE GUYS?: Charlotte was founded in 1946. They began playing football in 2013 and were an FCS Independent for two years before gaining FBS membership and joining Conference USA in 2015. Now in their 10th season, the 49ers own an all-time record of 37-68. They have appeared in one bowl game, the 2019 Bahamas Bowl, where they dropped a 31-9 count to Buffalo.

THE HEAD COACH: Will Healy is in his fifth year guiding the fortunes of 49er football. He owns a mark of 15-20 since taking over the reins.

GAINING MOMENTUM: The 49ers got off to a slow start this season, dropping each of their first three games by an average score of 47-19. However, they snapped a six-game losing streak with a wild 42-41 last-minute win at Georgia State last Saturday.

COMMON OPPONENT: Both South Carolina and Charlotte have faced Shawn Elliott’s Georgia State Panthers this season. The Gamecocks defeated Georgia State by a 35-14 count in the season opener for both squads, while the 49ers handed the Panthers a 42-41 setback last Saturday in Atlanta.

TURNING BACK THE CLOCK: From 1946-48, the Charlotte Center of the University of North Carolina (CCUNC) fielded a football team. The two-year night school was housed at Central High School and the athletic teams were nicknamed “Owls”. That school would go on to become Charlotte College and eventually UNC Charlotte.

EIGHT AGAINST THE FIVE: Charlotte has played eight games against Power-5 schools in its history. They are 1-7 in those contests, losing all seven road games, but knocking off Duke in 2021, 31-28, in the lone home contest against a Power-5 school.

GAMECOCKS VS. C-USA: The Gamecocks own an 11-0-1 record against schools that currently make up Conference USA, with 11-straight wins. They are 5-0-1 against Louisiana Tech, 3-0 versus UAB, 2-0 against Florida Atlantic and 1-0 versus Middle Tennessee. All 12 games have been played in Columbia.

NON-CONFERENCE SUCCESS: The Gamecocks are 37-12 in their last 49 non-conference games, a .755 winning percentage, with seven of the 12 losses in that stretch coming against Clemson. The Gamecocks went 4-1 against non-conference foes in 2021, posting wins over Eastern Illinois, East Carolina, Troy and North Carolina and losing to Clemson. They are 1-0 this season after an opening day win over Georgia State.

THE POWER OF FIVE: Since the turn of the century, the Gamecocks have a 50-4 mark against teams not currently in a Power-5 conference. The only four losses in that stretch came to UConn in the 2010 Papajohns.com Bowl, to The Citadel in 2015, to USF in the 2016 Birmingham Bowl and to Appalachian State in 2019. It should be noted that UConn was in the Big East, which was a BCS automatic qualifier during the 2009 season.

ABOUT LAST WEEK: South Carolina ran into a buzzsaw when the newly minted top-ranked team in the country, the Georgia Bulldogs, invaded Williams-Brice Stadium last Saturday afternoon for an SEC Eastern Division showdown. The defending national champions showed the country why they again may be the team to beat this season, as they rolled to a 48-7 win.

TOUGH SLATE: The Gamecocks have dropped back-to-back decisions against teams ranked in the top-25, first a 44-30 decision at No. 16 Arkansas, then a 48-7 setback to No. 1 Georgia last week in Columbia. The Gamecocks are in a stretch in which they are playing seven of 11 games against teams currently ranked in the nation’s Top-25, including four in the Top-10. In this week’s Associated Press poll, Georgia remains No. 1 while Arkansas is ranked 10th. Future opponents on the Gamecocks’ schedule include Clemson (5), Kentucky (8), Tennessee (11), Florida (20) and Texas A&M (23).

PLAYING SHORT-HANDED: The Gamecocks hosted Georgia without the services of several key players, including five starters on defense. Safety R.J. Roderick was injured on the first series of the season and has not played since. Edge rusher Jordan Strachan and linebacker Mohamed Kaba both suffered season-ending ACL injuries in the loss at Arkansas. In the loss to Georgia, the Gamecocks played without injured starting defensive tackle Alex Huntley, starting defensive back Cam Smith and key reserve defensive back David Spaulding. In addition, starting left tackle Jaylen Nichols sat out the contest due to injury.

FEELS LIKE THE FIRST TIME: Six players made their first start for the Gamecocks in the season opener versus Georgia State, but only two, MarShawn Lloyd and Alex Huntley, were making their first collegiate start overall. Spencer Rattler, Devonni Reed, Austin Stogner and Jordan Strachan made their first starts for Carolina, but had made starts at their previous stops. Safety Nick Emmanwori became the first true freshman from the 2022 signing class to earn a start when he was in on the first snap at safety at Arkansas. East Tennessee State transfer tight end Nate Adkins made his first start for the Gamecocks against Georgia, as did defensive end Gilber Edmond and true freshman walk-on defensive back DQ Smith.

IN THE NICK OF TIME: True freshman safety Nick Emmanwori continues to impress. The Irmo, S.C. product logged a game- and career-high 14 tackles against Georgia, all solo stops. It was the most tackles by a Gamecock since Ernest Jones collected 18 tackles at Ole Miss in 2020. After three games, Emmanwori leads the Gamecocks with 28 tackles, an average of 9.3 per game, which is tied for fourth in the SEC. The last freshman to lead the team in tackles was Skai Moore in 2013.

SPREADING THE WEALTH: Spencer Rattler tried to get everyone involved in the offense last week, as the Gamecocks completed passes to nine different receivers. Jalen Brooks led the way with five receptions, while five other players had two catches each. Oddly, the SEC’s leading pass catcher entering the game, Antwane Wells Jr., was held without a reception after posting an eight-catch, 189-yard performance the week prior at Arkansas.

COBRA KAI: Gamecock punter Kai Kroeger had another excellent day against Georgia. The junior punter who was the Ray Guy National Punter of the Week in Week 1, punted five times for a 44.4-yard average against the Bulldogs, with a long of 54 yards. All five of his punts pinned Georgia inside its own 20-yard line. Kroeger also completed a 20-yard pass out of punt formation for a first down. He is now 3-for-3 passing in his career, with all three resulting in first downs, including one touchdown.

A LITTLE HISTORY: 2022 marks the 129th season of intercollegiate football at the University of South Carolina, dating back to 1892. It is the 116th-consecutive year in which Carolina has competed on the gridiron. The University did not field a team in either 1893 or 1906. Carolina owns an all-time record of 622-603-44, a .507 winning percentage.

THREE AND OUT: The Gamecocks have lost three players to season-ending ACL injuries this year. Sixth-year tight end Chad Terrell suffered a torn ACL during the first scrimmage of preseason camp. It was the third ACL tear Terrell has suffered during his Gamecock career. The Gamecocks lost a pair of defensive starters, defensive end Jordan Strachan and linebacker Mohamed Kaba, to season-ending ACL tears in the Arkansas game.

SEEING DOUBLE: Redshirt senior Wyatt Campbell is an offensive lineman by trade and wears No. 68, but has also been used at tight end where he dons No. 80.

UP NEXT: The Gamecocks play another non-conference game next week at Williams-Brice Stadium when the FCS-level South Carolina State Bulldogs visit Columbia. The Gamecocks have won both of the previous meetings between the two schools that are separated by just 42 miles, posting a 38-3 win in 2007 and a 38-14 win in 2009.