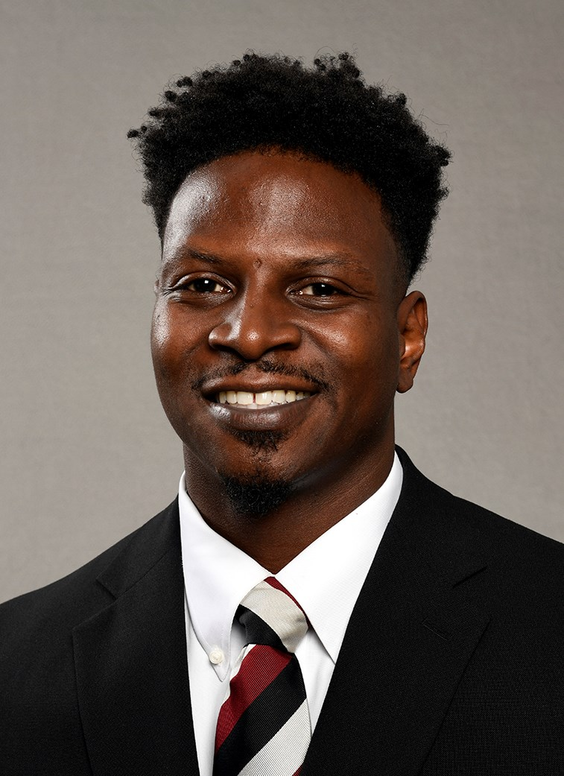 Montario Hardesty begins his second season in Columbia. He was named the Gamecocks’ running backs coach on Feb. 5, 2021.

In his first season with the Gamecocks, he mentored two players, Kevin Harris and ZaQuandre White, who were invited to the NFL Combine. Juju McDowell earned a spot on the Freshman All-SEC team as an all-purpose back.

Hardesty, a former NFL player, came to Columbia after spending the past two seasons as part of the Charlotte football coaching staff, working under head coach Will Healy as the 49ers’ wide receivers coach.

In his first season with the 49ers, he helped Charlotte to an historic season that included school records for wins (7), C-USA wins (5) and winning streak (5 games) and included a trip to the program’s first bowl game, the Makers Wanted Bahamas Bowl.

Hardesty spent the 2018 season as an offensive quality control coach at his alma mater, Tennessee. In 2017, he was an assistant strength and conditioning coach at Florida Atlantic, working for his former college coach, Lane Kiffin. He also spent two years as running backs coach and special teams coordinator at Norfolk State (2015-16).

Hardesty got his coaching start at Chowan University, where he served as an intern in 2014 under the NFL Players Association internship program before joining the staff at Norfolk State.

Hardesty played running back while earning his bachelor’s degree in sports management from Tennessee, graduating in 2009. He earned second team all-SEC honors as a senior when he ranked fourth in the league in rushing with 1,345 yards, the fourth-most in school history, and scored 14 touchdowns. He rushed for 2,391 yards, ninth in Vols’ history, and scored 27 touchdowns during his career on Rocky Top.

Hardesty was a second-round pick by the Cleveland Browns in the 2010 NFL Draft. In his first preseason game, he suffered a torn ACL and was sidelined the entire season. He played in 23 games with the Browns during the 2011 and 2012 seasons, totaling 153 carries for 537 yards, and 16 receptions for 138 yards. He was placed on injured reserve in 2013 following arthroscopic knee surgery, and was released later that year.