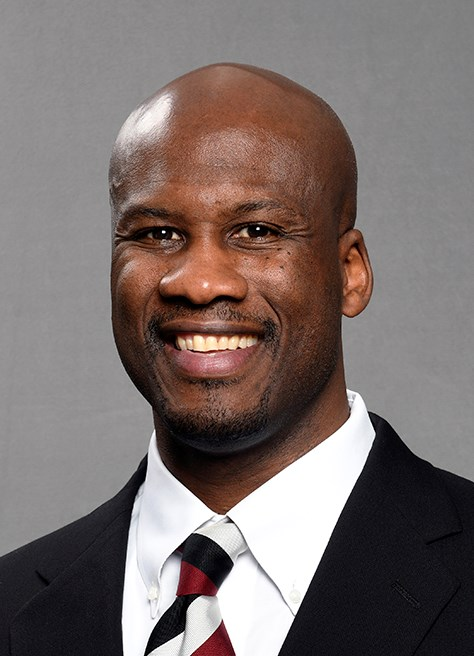 Torrian Gray begins his second season in Columbia. He was named the Gamecocks’ defensive backs coach on Jan. 15, 2021.

Gray, 48, has coached the secondary for 22 years, including 18 at the collegiate level and four in the NFL. He has developed a number of NFL defensive backs, including Brandon Flowers, Kam Chancellor, Kyle Fuller and Kendall Fuller at Virginia Tech and Teez Tabor, Marcus Maye, Quincy Wilson, Duke Dawson and C.J. Henderson at Florida.

Gray has spent the previous two seasons coaching the cornerbacks at the University of Florida, his second stint with the Gators. In his first year back in Gainesville in 2019, the Gators tied for ninth in the FBS with 16 interceptions on the season. Under Gray’s guidance, UF was one of only two FBS teams (FAU) to feature four players with at least three interceptions each. Additionally, Gray guided cornerbacks CJ Henderson (First Team) and Kaiir Elam (Freshmen Team) to All-SEC honors by the league’s coaches. Henderson later went on to be the ninth overall selection in the 2020 NFL Draft. In 2020, Elam earned first-team All-SEC honors.

Prior to his stint with the Gators, Gray worked with the defensive backs for the Washington franchise in the NFL. In 2017, his first season in Washington, Gray’s defensive backs helped produce the team’s strongest season against the pass in nearly a decade. The unit ranked third in the NFL in completion percentage allowed (57.6 percent), the team’s best ranking since leading the NFL in the category in 2005 (54.4), while finishing ninth in passing yards allowed per game (213.8, the team’s lowest since 2009) and 10th in opponent passer rating (81.0, lowest since 2008). One of his standout performers was former Gamecock D.J. Swearinger.

Prior to his arrival in Gainesville, Gray spent a decade at his alma mater, Virginia Tech, leading some of the nation’s best defensive backfields. In his 10 seasons coaching the secondary in Blacksburg under head coach Frank Beamer, his unit allowed just 185.0 passing yards per game and a 106.5 opponent passer rating – both ranked second in the nation over that span. Opposing quarterbacks completed just 50.4 percent of their passes in those 10 seasons, the lowest percentage of any defense in the nation. The Virginia Tech secondary ranked in the top 15 nationally in opponent passer rating eight times in Gray’s 10 seasons leading the unit, including three top-five finishes.

During Gray’s tenure, a total of 11 Hokie defensive backs were selected in the NFL Draft.

In 2014, the Hokies had the fourth-best pass defense (189.2 ypg) in the Atlantic Coast Conference despite losing All-American Kendall Fuller early in the season due to injury. His unit allowed opponents to complete just 49.6 percent of their passes, second-best in the conference.

In 2006, his first year leading the group, they ranked first in the country in passing yards allowed per game (128.2) and second in opponent passer rating (91.3).

Before returning to Virginia Tech, Gray spent two seasons in the NFL as assistant defensive backs coach for the Chicago Bears from 2004-05. In 2005, Gray’s unit helped the Bears rank fifth in the NFL in passing defense and finished tied for second in interceptions (24) as defensive backs Nathan Vasher and Mike Brown both earned Pro Bowl selections.

Gray began his coaching career at the University of Maine, serving as defensive backs coach for two seasons from 2000-01. He then spent the 2002-03 seasons as defensive backs coach at the University of Connecticut. During his time with the Huskies, he coached cornerback Justin Perkins, helping him to two all-conference selections and 12 career interceptions.

Following a standout career at Kathleen High School in Lakeland, Fla., Gray played collegiately at Virginia Tech and became a three-time all-conference selection. He helped lead the Hokies to a pair of conference titles and was drafted by the Minnesota Vikings in the second round (49th overall) of the 1997 NFL Draft. He spent three seasons with the Vikings before retiring after a career-ending knee injury in the spring of 2000.

A native of Lakeland, Fla., Gray has two daughters, Tori and Lexi.