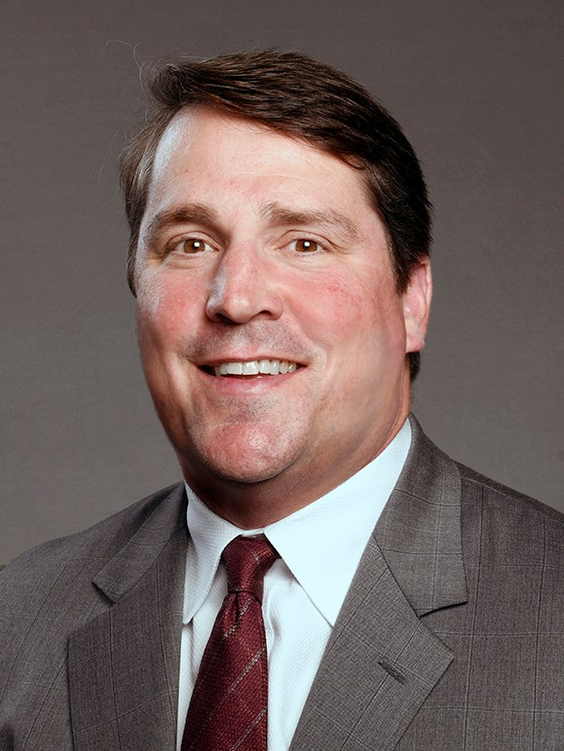 Will Muschamp begins his fifth season directing the Gamecocks’ football program in 2020. Muschamp was introduced as the University of South Carolina’s 34th head football coach on December 7, 2015.

In eight seasons as a college head coach, all in the Southeastern Conference, Coach Muschamp owns a 54-46 record, a .540 winning percentage.

In his first season in Columbia, Muschamp guided the Gamecocks to a 6-7 mark and a spot in the Birmingham Bowl. The Gamecocks doubled their win total from the previous season while increasing their SEC wins from one to three. The Gamecocks started as many true freshman (7) as any school in the country, and were the only Division I school to have true freshmen lead the team in both passing (Jake Bentley) and rushing (Rico Dowdle). Seventy-six of the Gamecocks’ 113-man Birmingham Bowl roster (67.3 percent) were either freshmen or sophomores in his first campaign.

His second season brought more success, as the team won nine games for just the seventh time in school history, was the only Power 5 school to have a multiple win total increase in 2016 and 2017, finished second in the SEC East and earned a second-straight bowl appearance. The season culminated with an Outback Bowl victory over Michigan on New Year’s Day.

Muschamp’s third squad posted a 7-6 campaign and a third-straight bowl appearance despite being decimated by injuries on the defensive side of the ball. The return of Deebo Samuel, who earned All-America recognition, sparked an offense that logged five games of 500 or more yards.

In his fourth year, the Gamecocks slipped to 4-8, but the season was highlighted by an overtime win over third-ranked Georgia, the eventual SEC Eastern Division champion. Javon Kinlaw earned first-team All-America honors and Bryan Edwards became the school’s all-time leading receiver.

Regarded as an outstanding defensive mind, Muschamp is a 25-year coaching veteran, including 17 years in the Southeastern Conference.

His previous head coaching experience came at the University of Florida where he posted a 28-21 record from 2011-14. He led the Gators to three bowl games in his four seasons in Gainesville and was recognized as the SEC Coach of the Year in 2012 after guiding Florida to an 11-2 record and a Top-10 finish.

As an assistant coach, the Rome, Ga., native has worked in two national championship games (2003 and 2009), winning with LSU in 2003, and coached in a pair of BCS bowl games following the 2008 and 2012 seasons. He has coached in and won three conference championship games, twice in the SEC and once in the Big 12. He was a finalist for the 2007 Broyles Award, presented to the nation’s top assistant coach.

Muschamp’s first full-time coaching experience in the SEC came at LSU under Nick Saban. He was the Tigers’ linebacker coach for one season before being elevated to defensive coordinator from 2002-04. His 2003 defense helped the Tigers to the national championship by leading the nation both in scoring defense (11.0 ppg) and total defense (252.0 ypg), while finishing second nationally in pass efficiency defense (89.8) and third in rushing defense (67.0 ypg).

Prior to taking the reins at Florida, Muschamp served as the defensive coordinator at Texas from 2008-10. Under his guidance, the Longhorn defense ranked No. 1 in the nation with 119 sacks and ranked in the Top-10 nationally allowing 2.9 yards per rushing attempt (third), 96.7 rushing yards per game (fourth) and 297.4 yards per game (seventh), all Big 12 bests during that span. In 2009, Texas played in the BCS National Championship game. Under Muschamp’s tutelage, Brian Orakpo won the 2008 Rotary Lombardi, Bronko Nagurski and Ted Hendricks awards. In the 2009 and 2010 NFL Drafts, Muschamp had a combined eight players drafted, seven in the first four rounds, including first-rounders Brian Orakpo and Earl Thomas.

In four of his nine seasons as an FBS defensive coordinator, his teams allowed less than 100 rushing yards per game and twice led the nation in rushing defense. His 2003 LSU defense led the country by allowing 67 yards per game on the ground, the best mark by an SEC team in the 2000s, while Texas gave up just 73.1 yards on the ground in 2009 to pace the nation.

A 1994 Georgia graduate, Muschamp moved immediately into coaching, working as a GA at Auburn from 1995-96, while earning his master’s degree. He served as a secondary coach at West Georgia (1998) and Eastern Kentucky (1999) before moving into his first defensive coordinator position at Valdosta State for the 2000 season, where he helped the Blazers to a 10-2 record and the Gulf South title.

Muschamp also logged a stint in the NFL, working as the Miami Dolphins Assistant Head Coach for Defense in 2005 under Nick Saban.

During his playing career at Georgia, Muschamp earned his way from walk-on to scholarship player by the spring of his redshirt freshman season and eventually was named co-captain as a senior. A safety on the gridiron, he earned a spot on the SEC Academic Honor Roll in 1993.

Born August 3, 1971, Muschamp and his wife, the former Carol Davis, have two sons, Jackson and Whit. Jackson is a walk-on freshman quarterback at Georgia.