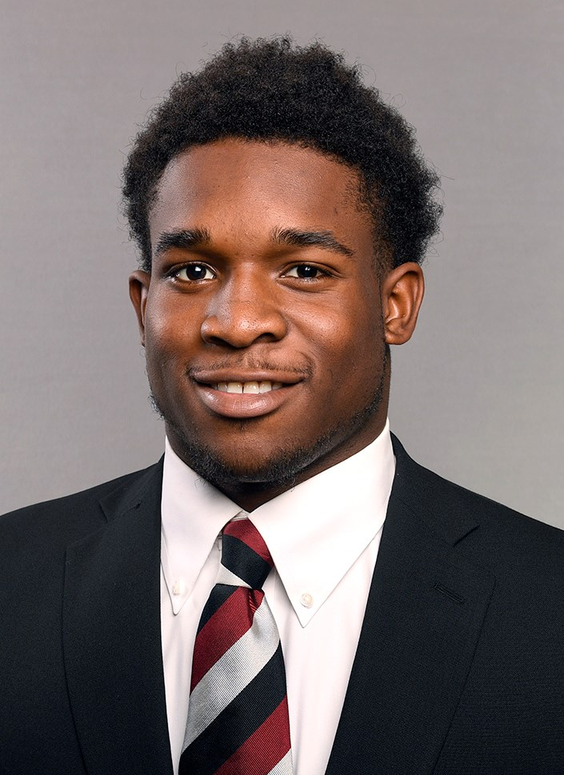 “Super Senior” who took advantage of the NCAA rule allowing him to return for a fifth year… has a knack for being around the ball and instincts to get off blocks… has played in 50 games, making 31 career starts… collected 114 career tackles including 20.5 tackles for loss and 12.0 sacks.

“Super Senior” who started all 13 games at a defensive end position… selected by the Carolina coaches as one of four Overcoming Adversity Award winners… recorded 27 tackles, including 4.0 tackles for loss and 2.5 sacks… credited with six quarterback hurries, including two versus Auburn… forced a fumble late vs. Florida that Jabari Ellis returned for a score… registered season-high five tackles at Texas A&M… served as a team captain against Eastern Illinois, Georgia and Florida.

Named to Athlon magazine’s preseason All-SEC second-team unit… appeared in four games collecting nine tackles… started each of the first three contests… credited with three tackles including a half-sack at Florida… registered three tackles at Vanderbilt… came off the bench at LSU after missing the Auburn game and logged two stops… missed the final five games with a knee injury.

Junior who played in all 12 games making 11 starts… credited with 40 tackles… led the team with 10.0 tackles for loss and tied for the team lead with 6.0 sacks, which ranked 10th in the SEC… also credited with four quarterback hurries, tying for the team lead, and a pair of pass breakups… had four tackles, a sack and a PBU in the season opener against North Carolina… credited with a sack and two tackles for loss among his five stops along with a forced fumble at Missouri… had a sack and fumble recovery in the win over Kentucky… had five stops and a PBU in the upset win at Georgia… best outing came at Tennessee when he logged seven tackles including a tackle for loss… had his first career multi-sack game with 2.0 quarterback takedowns against Vanderbilt.

Sophomore defensive end who played in eight games making four starts… credited with 15 tackles including 3.0 tackles for loss and a sack… also logged three quarterback hurries… did not play in the final five games after exiting the Ole Miss game with a knee injury… made his first career start in the Georgia game and logged three tackles… was back in the starting lineup vs. Kentucky, setting a career high with six tackles… also got the starting nod against both Missouri and Texas A&M… notched 2.0 tackles for loss and a key fumble recovery to set up Carolina’s third touchdown of the game in the win over Vanderbilt… posted two tackles, a sack and a QB hurry in the Texas A&M game.

True freshman defensive end… played in all 13 games making 23 stops with 3.0 tackles for loss and a pair of sacks… also credited with two quarterback hurries… had his first three-tackle day at Texas A&M game… set his career high with four tackles at Georgia… logged his first career sack in the victory over Florida… tallied three tackles and a sack vs. Clemson.

Prepped at Tucker High School in Georgia… the Tigers posted a 13-2 record and reached the state AAAAAA Championship game in his senior season… earned first team all-state honors by the Georgia Sports Writers Association… coached by Bryan Lamar… participated in the Under Armour All-America Game in Orlando following his senior season… Rivals considered him the 23rd-best player in the Peach State and the 14th-best defensive tackle in the country… ranked as the 93rd-best player in the state of Georgia and the 45th-best strongside defensive end in the country by 247Sports… ESPN considered him the 26th-best player in the state, the 15th-best defensive tackle in the nation and No. 210 overall… Scout ranked him as the 47th-best defensive end in the nation.