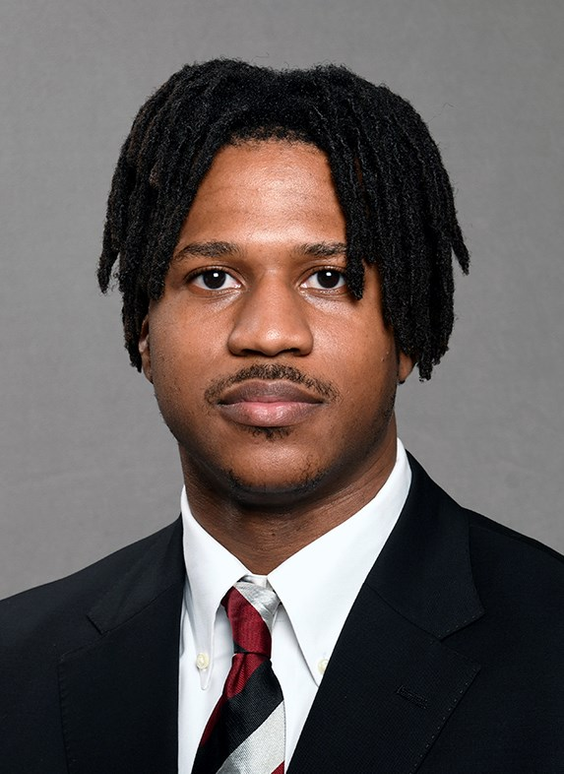 Senior wide receiver who is in his second season with the Gamecocks… transfer from Georgia Tech… blessed with excellent speed… turned in his best game as a Gamecock in the bowl win over North Carolina and carried that over into the spring when he was named a co-winner of the Most Improved award for the offense… has appeared in 32 career games, making 18 starts… has 43 career receptions for 683 yards and eight touchdowns… averaging 15.9 yards per reception… also has rushed for one touchdown and threw for another.

2021 (Junior)
Transfer from Georgia Tech who joined the team in January… saw action in all 13 games, making one start… caught 11 passes for 104 yards… logged two receptions for 15 yards in the season opener against Eastern Illinois… also had two catches against Troy… had his best game of the season in the Duke’s Mayo Bowl win over North Carolina when he caught four passes for 61 yards, including a season-long 33-yard reception… recorded one carry for no yards and two punt returns for four yards… named to the SEC Fall Academic Honor Roll.

2020 (Sophomore)
Started each of the first seven games for Georgia Tech before sitting out the final three games with an injury… caught 11 passes for 183 yards, 16.6 yards per catch, with one touchdown… also had two rushes with a touchdown and one punt return… best game came against Boston College when he matched his career-high with four receptions for a career-best 75 yards and a touchdown…. also had a two-yard TD run in that contest… had a 40-yard reception at Syracuse… completed a nine-yard pass for a touchdown against Louisville.

2019 (Freshman)
Enrolled at Georgia Tech in January… appeared in all 12 games, making 10 starts for the Yellow Jackets… turned in an historic season, tying Calvin Johnson for most receiving touchdowns by a freshman at Tech with seven… amassed a team-leading 396 receiving yards on 21 receptions, 18.9 yards per catch… returned three kicks for 59 yards, including a 33-yarder against NC State… also took back 10 punts for 34 yards with a long of 23 against USF… hauled in seven catches for more than 25 yards… began his career with a 28-yard touchdown reception at Clemson… logged a season-best 64 receiving yards, including a 42-yard catch, at Temple… hauled in a 32-yard TD against North Carolina and had a 59-yard TD reception at Virginia… caught a TD pass in three-straight games against Miami, Pitt and Virginia… had a season-high four catches for 61 yards, including a 51-yarder vs. Pitt… caught a career-high two touchdowns versus NC State.

Graduated from Jefferson High in Tampa, Fla. in December 2018… logged 74 receptions for 1,348 yards and 13 touchdowns and ran for a pair of scores over his final two prep seasons, including 38 catches for 726 yards and seven scores as a senior in 2018 … Coached by Joe Midulla … Placed fourth at the 2017 Florida 2A state track championships in the 100m (10.40 seconds)… high honor roll student.