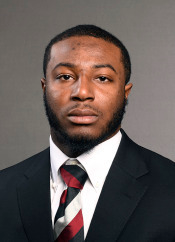 Versatile performer who has played linebacker, safety and nickel during his career… has four career starts among his 28 career appearances… is out for the spring while recovering from elbow surgery.

2017: Credited with seven tackles, all solo stops, in eight contests… played in the season opener against NC State, then was sidelined for the next three contests with an injury… logged his first career sack in the victory over Tennessee… made his first start of the season against Wofford and made three tackles before suffering a season-ending elbow injury.

2016: Redshirt freshman defensive back who played in 12 games, making three starts… logged 15 tackles, one forced fumble and one interception… made his debut in the win over Vanderbilt… earned his first career start and had his best performance in the East Carolina win, posting five tackles (four solo) and a forced fumble… jarred the ball loose at a crucial time, creating a fourth-quarter turnover near the goal line… started at the nickel position against Texas A&M and made two tackles… made his first career interception against Georgia, with the pick coming inside of the Carolina 10-yard line… also logged a tackle for loss in that contest… did not play against Missouri but was back on the field against Florida… notched three tackles, including a tackle for loss, at Clemson… named to the SEC Fall Academic Honor Roll.

2015: Redshirted in his first season with the Garnet & Black… missed some practice time with a right knee sprain… named to the 2015-16 First-Year SEC Honor Roll.