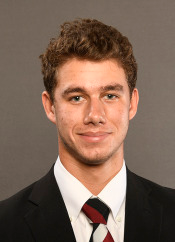 Walk-on who is one of several candidates for the placekicking duties.

2017: Walk-on kicker who joined the squad when the roster expanded in late August.

HIGH SCHOOL: Served as the kicker for Malvern (Pa.) Prep School… graduated in 2017… the Friars went 8-3 in his senior season… coached by Aaron Brady… lettered three times in soccer and twice in football… was a member of the National Science and National Art honor societies.