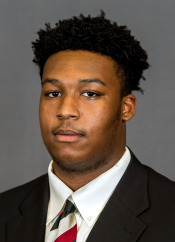 “Super Senior” offensive lineman who returns for a fifth year after a back injury which required season-ending surgery shortened his 2021 campaign… has been a starter throughout his career, taking the first snap in 30 of his 32 games played over the past four years… is healthy again and back to full speed, ready to compete for the starting right tackle position… tabbed as a pre-season second-team All-SEC performer, according to Phil Steele… brother, D.J., plays professionally for the Minnesota Vikings.

2021 (Senior)
Named to Athlon’s preseason fourth-team All-SEC unit… started each of the first six games at right tackle… suffered a back injury that forced him to the sidelines and eventually led to a season-ending surgery in November… named one of three Nutrition Award winners as selected by the Gamecock coaching staff… recognized as the President’s Outstanding Student-Athlete at the 2021 spring game… honored as the Dodie Academic MVP at the 2021 all-sports gala… named to the SEC Fall Academic Honor Roll.

2020 (Junior)
Junior who was not available in the spring after undergoing hip surgery… started all 10 games… part of the offensive line that helped Kevin Harris become the first Gamecock to rush for 1,000 yards in a season since 2013… started the first three games at left tackle before being switched back to the right tackle spot for the final seven games… was the Gamecocks’ nominee for the Wuerffel Trophy… named to the SEC Fall Academic Honor Roll.

2019 (Sophomore)
Sophomore tackle who started all seven games in which he appeared… started the first four games of the season at right tackle… suffered an ankle injury at Missouri and missed the next five games… returned to the starting lineup against Appalachian State… moved to the left tackle position for the final game of the season against Clemson… named to the SEC Fall Academic Honor Roll.

2018 (Freshman)
True freshman who saw action in nine games… moved into the starting lineup midway through the season and started each of the final seven games at right tackle… named first-team Freshman All-America by 247Sports… earned a spot on the Coaches’ Freshman All-SEC squad… saw limited action in the season-opener vs. Coastal Carolina… was in the lineup for the first time since the opener when he played 30 snaps against Texas A&M… made his first-career start at right tackle in the win over Tennessee, becoming the second true freshman to start for Carolina in 2018… with older brother, D.J., starting at Buck, they became the first set of brothers to start for Carolina since the 2014 season when Gerald Dixon and Gerald Dixon Jr. were starters along the defensive line… named the SEC Freshman of the Week for his efforts against Tennessee… with D.J. earning SEC Defensive Lineman of the Week the same week, became the first set of brothers to earn league honors the same week… named to the First-Year SEC Academic Honor Roll.

HIGH SCHOOL
Graduated from Tucker (Ga.) High School in 2018… helped the Tigers go 12-2 and earn a No. 24 ranking in the state… Tucker reached the Class AAAAAA state Final Four in his senior season… coached by Bryan Lamar… was a first-team all-state selection… earned first-team All-USA Georgia football team accolades as selected by USA TODAY as a senior… credited with 24 pancake blocks as a senior… anchored an offensive line that pounded out 258.7 yards per game and 7.9 yards per carry… named an Under Armour All-American… ranks 13th in national composite rankings of offensive tackle prospects, and is listed as the 178th-best overall prospect in the country… ranked No. 117 on the ESPN300 list… listed No. 36 overall and the fourth-best offensive tackle in the country as part of PrepStar’s Dream Team.

PERSONAL
Dylan Isaiah Wonnum was born April 5, 2000… graduated in May with a degree in criminal justice… is the brother of former Gamecock standout D.J. Wonnum, who was selected by the Minnesota Vikings in the fourth round of the 2020 NFL Draft… has represented football on the campus SAAC and represented South Carolina as part of the football leadership for the SEC.