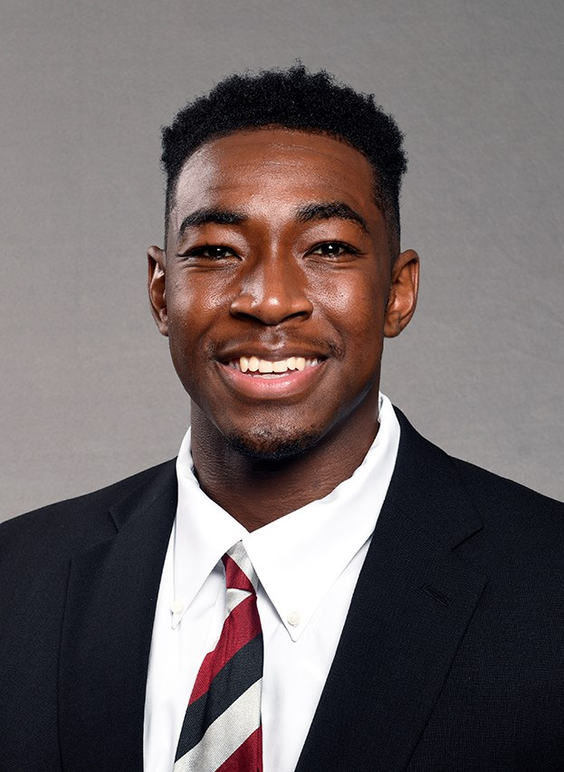 “Super Senior” wide receiver who is in his third year in Columbia… returned to the active roster in the summer of 2022 after being away from the team since the middle of the 2021 season… originally joined the program in the fall of 2020… has played in a dozen games at the Division I level, making 10 starts… has 25 career catches for 281 yards and a score for the Garnet & Black… began his career at Division II Wingate in North Carolina and also had a brief stint at Tarleton State in Texas… caught 52 passes for 1,048 yards and 10 TDs in two seasons at Wingate.

2021 (Senior)
Started each of the first six games… caught 14 passes for 181 yards with a score… best game was a four-catch, 63-yard effort against Kentucky, including a 5-yard touchdown reception… hauled in three passes against Georgia for 54 yards, including a season-long 36-yard reception… also had three receptions against Troy… was not with the team through the second half of the season… recognized as the South Carolina Spirit Award winner at the 2021 Garnet & Black Spring Game.

2020 (Junior)
Transfer who spent the spring semester at Tarleton State before arriving in the fall… did not gain NCAA eligibility until the fifth game of the season… played in each of the final six games, starting the final four… caught 11 passes for 100 yards… made his first start at Ole Miss and hauled in three passes for a season-high 47 yards… also had three receptions against Missouri and Georgia.

2019 (Sophomore)
Played at Division II Wingate where he earned first team All-South Atlantic Conference honors… the Bulldogs posted a 10-2 mark, including a 7-1 record in the SAC, falling in the first round of the playoffs… coached by Joe Reich… appeared in all 12 games… caught 35 passes for 751 yards, 21.5 yards per catch, with six scores… also rushed twice for 36 yards with a long of 29 against Limestone… had a season-high 121-yard receiving performance, including a career-long 66-yard reception and logged two TDs against UVA-Wise… logged a trio of 100-yard receiving games, eclipsing the century mark against UVA-Wise (121), UNC Pembroke (116) and Newberry (115)… posted a career-high six receptions against Newberry.

2018 (Freshman)
Began his collegiate career at Wingate University… the Bulldogs finished 9-4, including a 5-2 mark in the SAC, and reached the second round of the NCAA Division II playoffs… played in all 12 games, catching 17 passes for 297 yards, a 17.5-yard average, with four touchdowns… best game was a five-catch, 91-yard, two-touchdown performance at West Georgia, which included a season-long reception of 40 yards… also was a member of the Wingate track & field squad, competing in the sprints and jumps.

Graduated from Hickory Ridge High School in Harrisburg, N.C. in 2018… coached by Jason Seidel… had 44 catches for 771 yards and nine touchdowns during his senior year.

Jalen Allen Brooks was born May 7, 2000… is a sport and entertainment management major.