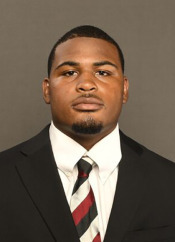 Senior defensive back… former JUCO player who spent two seasons with the Gamecocks… played for rapper Snoop Dogg in the Snoop Youth Football League, a Pop Warner-age conference in California… recorded 71 tackles and  two interceptions during his Gamecock career.

2018: Senior cornerback who played in all 12 regular season games in 2018, making 11 starts… did not play in the Belk Bowl versus Virginia due to an injury… one of three players selected by his peers for the Unselfish Teammate Award for special teams… ranked fourth on the squad with 63 tackles and led the team with nine pass breakups… had three kick returns for 45 yards, including a long of 19 vs. Missouri… set a then-career high with five tackles against Georgia… led the Gamecocks and tallied a new career high with eight tackles at Kentucky… also credited with his first-career tackle for loss… filled the stat sheet in the Ole Miss win, with 13 tackles, 0.5 tackles for loss and a pass breakup… logged nine tackles in the Florida game… invited to the East-West Shrine game… shared Jim Carlen Special Teams Player of the Spring honors with Steven Montac.

2017: Junior college transfer who played in 12 games, primarily on special teams… credited with eight tackles… showed a nose for the football as he was in on three turnovers… logged his first stats at Texas A&M, making one tackle and recovering an Aggie fumble… notched two tackles against Arkansas and recorded his first interception as a Gamecock, racing 45 yards for the game-sealing touchdown…collected his second interception of the season against Clemson… made his first start at cornerback in the Outback Bowl win over Michigan and responded with a season-best four tackles.

2016: Spent his second season at Arizona Western College in Yuma… played cornerback and was used as a kick returner by head coach Tom Minnick… the Matadors finished the season with an 11-1 record and ranked third in the NJCAA rankings… their only loss came in the national championship game to Garden City (Kan.)… earned second-team All-America honors after recording 30 tackles with six interceptions, returning two for scores, and five pass breakups… averaged 42.0 yards on nine kickoff returns, with two touchdowns… was named the NJCAA Special Teams Player of the Week after logging 316 return yards, including back-to-back kickoff returns for touchdowns, against Mesa… considered the 25th-best junior college prospect in the nation by Rivals… ranked at the nation’s No. 34 overall junior college prospect and the No. 3 JUCO cornerback by 247Sports… rated as the third-best JUCO cornerback and the 10th-best junior college player overall by ESPN… considered the fifth-best cornerback and the 23rd-best JC player overall by Scout.

2015: Collected 36 tackles with five INTs and four pass breakups as a freshman at Arizona Western College.

HIGH SCHOOL: Graduated from Salesian High School in California in 2015.