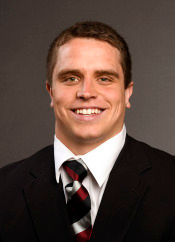 CAREER
Five-year tight end and special teams performer… appeared in 39 games during his Carolina career with 14 starts… credited with 37 career receptions for 459 yards with three touchdowns… has been on the SEC’s academic honor roll every year.

2019
Fifth-year tight end who was a productive player for the Gamecocks in his final season… ranked third on the team with 31 receptions for 349 yards and a pair of touchdowns while starting all 12 games… entered the season with just six career receptions… had a then career-high four receptions against Charleston Southern, then topped that with five catches for 46 yards against Alabama… logged three receptions for a career-high 52 yards at Missouri in his home state… credited with five receptions for 43 yards versus Appalachian State and added five catches for 47 yards at Texas A&M… had touchdown catches against North Carolina and Alabama… named a Dr. Harris Pastides Outstanding Student-Athlete Award winners at the spring game.

2018
Junior tight end who saw action in all 13 games, making one start… named one of three Strength & Conditioning Award winners by the coaches following the season… caught three passes for 53 yards, a 17.7-yard average, with one score… made his first reception since 2015 with a seven-yard catch vs. Georgia… came up with perhaps the biggest offensive play of the Missouri win, a 27-yard catch-and-run to set up the game-winning field goal in the final minute… caught his first-career TD pass, a 19-yarder, at Florida… named to the SEC Fall Academic Honor Roll.

2017
Redshirt sophomore tight end who saw action in each of the first two contests on special teams… suffered a rib injury in the Missouri game that sidelined him for the remainder of the season, although he did dress for the final two games… named to the SEC Fall Academic Honor Roll.

2016
Redshirted in his second season at Carolina while battling a foot injury all year… named to the SEC Fall Academic Honor Roll following the season.

2015
True freshman who appeared in all 12 games with one start… a regular on special teams who also saw action at tight end… logged three receptions for 57 yards… caught his first pass in his home state of Missouri… had a season-long 27-yard completion at Texas A&M… also caught a pass against Florida… made his first start against The Citadel… named to the 2015-16 First-Year SEC Honor Roll.

PERSONAL
Kyle Matthew Markway was born March 4, 1997… is a sport and entertainment management major who graduated in May 2019… uncle, Matt Markway, played for Iowa in the ‘90s.