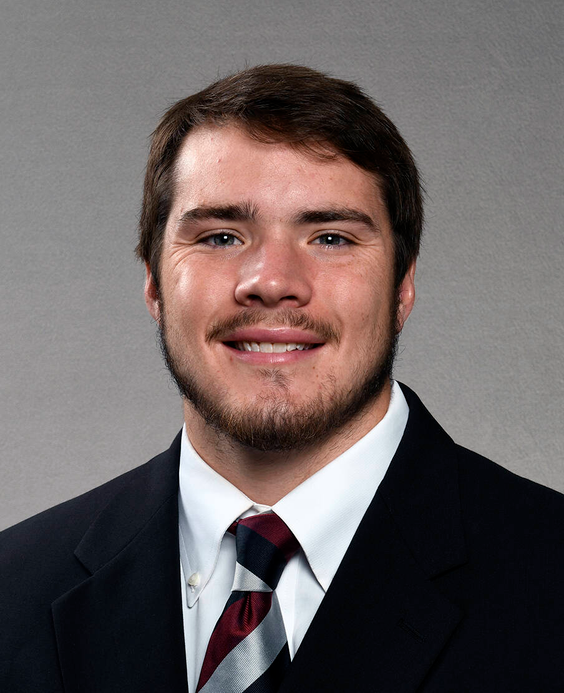 Three-time All-Southern Conference tight end who transferred from East Tennessee State for his final season… joined the Gamecocks in the summer… considered more a traditional tight end… brings veteran leadership and football savviness to the tight end room… logged 73 catches for 749 yards and four TDs for the FCS-level Buccaneers, appearing in 43 games, including 29 starts… a regular member of the SoCon Honor Roll.

2021 (Senior)
Earned second-team All-SoCon recognition… played in all 13 games including 11 starts for East Tennessee State, a top-10 team in the FCS… the Bucs, under head coach Randy Sanders, posted an 11-2 record, falling in the quarterfinal round of the playoffs at eventual national champion North Dakota State… caught 33 passes for 357 yards and a touchdown… long reception was 24 yards… lone TD came against The Citadel… had the biggest game of his career in the second-round playoff win over Kennesaw State… caught a career-best seven passes for a career-high 94 yards, and his two-point conversion with 35 seconds remaining proved to be the difference in a 32-31 decision… had five catches for 71 yards on the game-winning drive… named to the 2021 SoCon Fall Academic All-Conference team.

2020 (Junior)
Season was played in the spring of 2021 due to the COVID-19 pandemic… named first-team All-SoCon by the league’s coaches for the second-straight year… appeared in all six games, starting the final four… totaled 10 receptions for 101 yards, ranking fourth on the team in receiving yards and fifth in receptions… hauled in at least one pass in each of the final five games… season-long reception of 22 yards came in the win at The Citadel… posted a season-best performance in the finale at Mercer with four receptions for 39 yards… named to the SoCon Honor Roll, SoCon All-Academic Team and was awarded the Commissioner’s Medal… tabbed to the FCS ADA Academic All-Star team.

2019 (Sophomore)
Named first-team all-conference by the league’s coaches… started all 12 games for the Blue & Gold… finished second on the team with a career-high 25 receptions… ranked second on the team in receiving touchdowns with two and fourth in receiving yards with 241… scored in back-to-back games to start the season at Appalachian State and in the home opener against Shorter… pulled down a career-high five receptions and 55 yards against Samford… named to the SoCon Honor Roll… captured a spot on the 2019 Fall Academic All-Conference team.

2018 (Freshman)
Appearing in all 12 games with two starts as a true freshman… earned starting assignments against Western Carolina and Jacksonville State… totaled five catches for 50 yards and one touchdown… first collegiate reception came against Tennessee, while season-long 24-yard catch happened in the homecoming win over Gardner-Webb… first collegiate touchdown came against Western Carolina on a one-yard reception… named to the SoCon Honor Roll.

HIGH SCHOOL
Graduated from Bearden High School in Knoxville, Tenn., in 2018… lettered in football and baseball… was a three-time all-conference selection in football and once in baseball… played offensive tackle and also registered 76 tackles, 14 tackles for loss, six sacks and one fumble recovery during his senior season on the gridiron… had a career .354 batting average while playing third base during his sophomore and junior seasons on the baseball diamond.

PERSONAL
Nathan T. Adkins was born July 9, 1999… graduated from ETSU with a degree in sport & entertainment management… father, Greg, is the Gamecocks’ offensive line coach… brother, Nick, played baseball at Marshall… sister, Natalie, is a sophomore at Tennessee where she is a UDA dance instructor and Young Life leader.