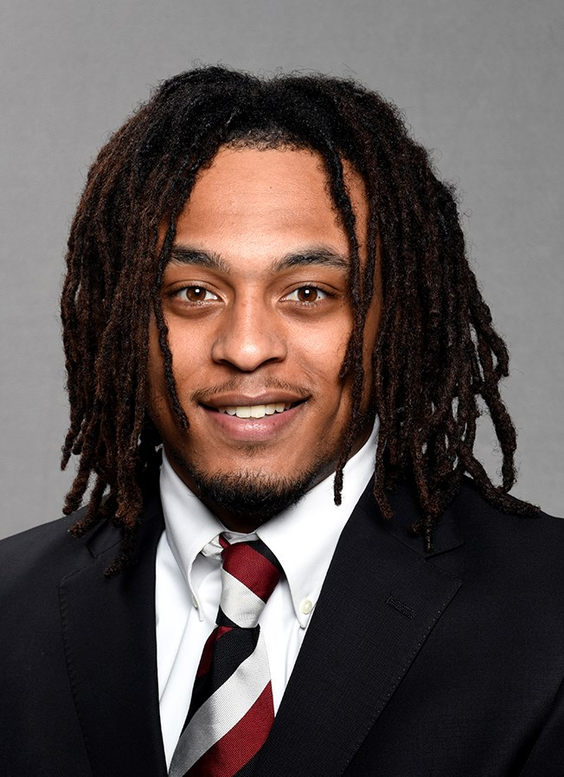 Returning three-year starter and four-year letterwinner at safety… has appeared in 43 games over the past four seasons, making 33 starts… leader in the secondary from a communication and leadership standpoint… owns 198 career tackles with a pair of interceptions.

2021 (Senior)
Fourth-year safety who played in 12 games, making 11 starts… finished fourth on the squad with 64 tackles, including a tackle for loss… credited with a pair of forced fumbles, one each against Georgia and Kentucky… also recovered a fumble versus Auburn… selected by the Carolina coaches as one of four Overcoming Adversity Award winners… missed the season opener against Eastern Illinois… logged a season-high 10 tackles against Kentucky… also had eight stops at Georgia and seven each against Auburn and Clemson.

2020 (Junior)
Third-year player who played in and started six of the first seven games of the season… played hurt for part of the year and elected to opt out of the rest of the season following the dismissal of head coach Will Muschamp… credited with 23 tackles… had at least three stops in every game he played, including a season-high five tackles against Auburn… recorded a quarterback hurry against Tennessee, a pass breakup at Vanderbilt and a tackle for loss at Florida.

2019 (Sophomore)
Sophomore who played in all 12 games making 11 starts… did not start the season opener at North Carolina, but came off the bench and posted a season-high nine tackles… started at the nickel position against Charleston Southern and Alabama, before moving to safety, where he started the final nine contests… ranked sixth on the squad with 55 tackles including 3.5 tackles for loss and a sack… recorded two interceptions and a pass breakup… had eight stops against Alabama including a sack… picked off passes against Charleston Southern and Vanderbilt… collected six tackles and a pass breakup versus Florida… named the Most Improved Player of the Spring for Special Teams.

2018 (Freshman)
True freshman safety who enrolled at Carolina in January and went through spring drills… saw more action as the season progressed… played in all 13 games, starting each of the last five contests… had just 11 tackles through the season’s first seven games, but collected 45 stops over the last six contests to rank fifth on the team and second among SEC freshmen with 56 tackles… tied for the SEC freshman lead with two fumbles forced… gained his first significant playing time at Ole Miss after injuries sidelined Jamyest Williams and Javon Charleston… responded with 13 tackles, the most tackles for a freshman at South Carolina since Ben Washington notched 15 stops against Mississippi State in 1994… earned his first start at Florida and collected nine tackles, then had a team-high 10 stops at Clemson… forced a fumble against both Akron and Virginia in the season’s final two games.

HIGH SCHOOL
Graduated from Cane Bay High School in Summerville, S.C. in December of 2017… was a triple-option quarterback who helped the Cobras go 9-3 and reach the second round of the 4A playoffs, despite missing six games mid-season due to injury… ran for 354 yards, passed for 188 and totaled 10 touchdowns over six games…selected to the Shrine Bowl of the Carolinas… rushed for 1,778 yards and 23 TDs as a junior… coached by Russell Zehr… ranked No. 21 among the Palmetto state’s recruits, and was the 95th-ranked safety in the nation according to 247’s composite rankings… Rivals ranked him as the 18th-best player in the state… named to the PrepStar All-Atlantic Region team.