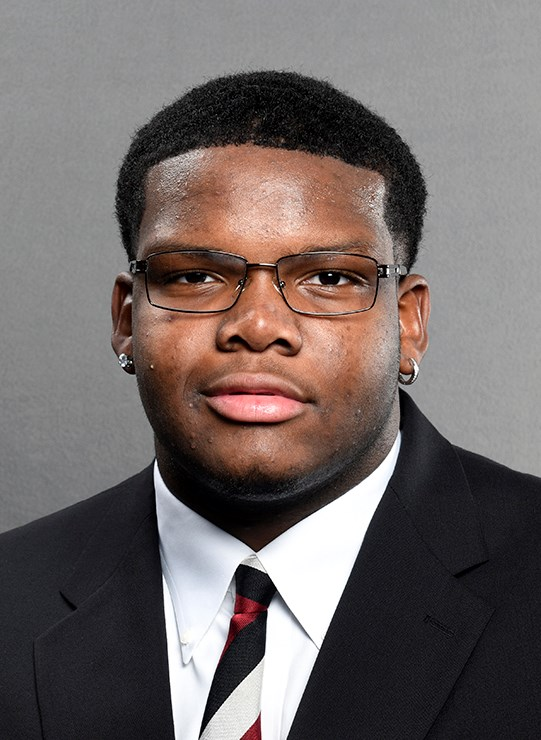 Third-year interior offensive lineman who is the returning starter at right tackle… gained confidence from that experience… big body with great mass… has some powerful explosion… working at right tackle but could slide inside and play guard.

2021 (Redshirt Freshman)
Redshirt freshman who played in all 13 games, making seven starts at the right tackle position… named to the Freshman All-SEC by the league’s 14 coaches… moved into the starting lineup midway through the season following an injury to Dylan Wonnum, and held that position throughout the remainder of the season… named to the SEC Fall Academic Honor Roll.

2020 (Freshman)
True freshman who enrolled in January and went through the abbreviated spring drills… saw action at Vanderbilt, his only game action… redshirted… named to the SEC First-Year Academic Honor Roll.

HIGH SCHOOL
Graduated from Calhoun County High School in St. Matthews, S.C. in December 2019… played on the offensive line… the Saints posted a 6-6 mark in 2019, reaching the second round of the playoffs… selected to play in the Shrine Bowl of the Carolinas… named first team all-state by the South Carolina coaches… was a first-team all-state selection as a junior by USA TODAY… coached by Wayne Farmer…also competed in the throw events on the Saints’ track team… Rivals considered him the ninth-best player in the Palmetto State and the 35th-best offensive guard in the country… rated as the seventh-best player in the state of South Carolina, the 21st-best offensive guard in the country and No. 444 overall in the 247Sports Composite… considered the No. 264 player in the country in the ESPN300… the first commitment of the 2020 class, Wannamaker verballed the Gamecocks in the spring of 2018.