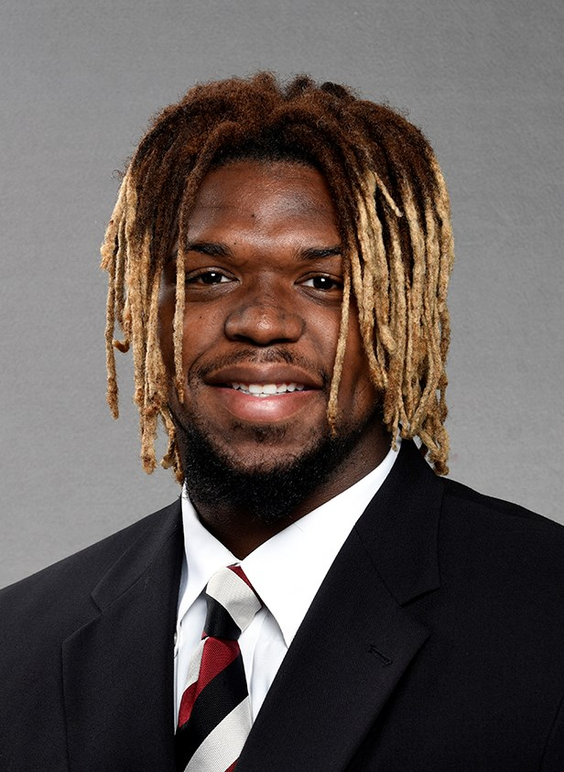 Senior who is an honors candidate in 2022… big and athletic… has assumed a leadership role… pre-season third-team All-SEC according to Athlon and Phil Steele… earned Freshman All-SEC honors and honorable mention Freshman All-America accolades in 2019… has appeared in all 35 games over the past three seasons with 20 starts… shared Rex Enright Defensive Player of the Spring honors with Cam Smith.

2021 (Junior)
Started all 13 games at a defensive tackle position… credited with 38 tackles, registered 5.0 tackles for loss including 4.0 sacks, which ranked second on the squad… notched two quarterback hurries, broke up a pass and recovered a fumble… logged a season-high seven tackles against Vanderbilt… recovered a fumble in the win over Troy… served as a team captain against Troy and Missouri… named the Most Improved Player of the Spring – Defense and was the Harold White GPA Award winner for the Defense, as recognized at the spring game… named to the SEC Fall Academic Honor Roll.

2020 (Sophomore)
Second-year defensive tackle who appeared in all 10 games making seven starts… came off the bench in the first three games before moving into the starting lineup for good against Auburn… credited with 35 tackles, fifth on the squad, including 2.5 tackles for loss and a sack… notched five tackles in a reserve role in the season-opener against Tennessee… credited with a tackle for loss at Vanderbilt… notched five tackles at LSU and six more versus Texas A&M… notched with a career high eight tackles at Ole Miss… registered his first career sack against Georgia… had five stops in the season-finale at Kentucky. .. named to the SEC Fall Academic Honor Roll.

2019 (Freshman)
Enrolled in January and went through spring drills… earned Freshman All-SEC honors as selected by the league’s coaches and was an honorable mention Freshman All-American, as selected by Pro Football Focus… played in all 12 games along the defensive line… credited with 16 tackles and one quarterback hurry… six of his 16 stops came in the opener against North Carolina… had a pair of stops against Charleston Southern, Missouri and Texas A&M… named to the SEC First-Year Academic Honor Roll.

HIGH SCHOOL
Graduated from T. L. Hanna High School in December 2019… led the Yellow Jackets to a 14-1 record and a spot in the South Carolina 5A state championship game… coached by Jeff Herron… logged 87 tackles including 15.0 tackles for loss and 6.0 sacks as a senior… had an interception return for a TD in the title game… rushed 104 times for 889 yards, 8.5 yards per carry, with a pair of 100-yard games… selected to play in the Under Armour All-American Game and in the Shrine Bowl of the Carolinas, where he was the Defensive MVP… named the South Carolina Gatorade Football Athlete of the Year and South Carolina’s Mr. Football… also named the state’s top lineman by the SC Football Coaches Association… rated as the top player in the state, the No. 1-ranked defensive tackle in the country and No. 8 overall, according to 247Sports Composite… Rivals ranks him as the ninth-best prospect in the country… ranked 20th on the ESPN300.

Zacchaeus L. Pickens was born March 6, 2000… is a sport and entertainment management major.