2011: All-SEC performer and All-America candidate… preseason Lott Trophy candidate… earned a spot on the Playboy preseason All-America team… named to Phil Steele’s preseason All-SEC first team and All-America second team… expected to take on a bigger leadership role in the secondary… has the ability to make the big play… work ethic and competitiveness are unmatched… has started all 27 games at cornerback since he stepped onto the Carolina campus… named the Harris Pastides Scholar-Athlete for football in the spring of 2011. 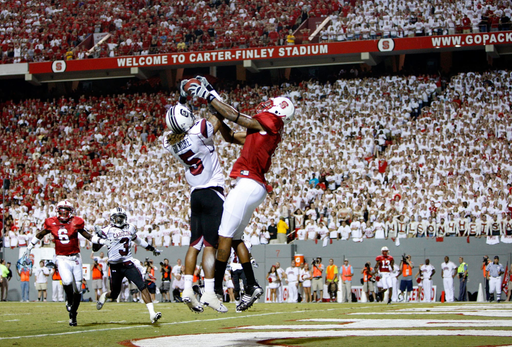 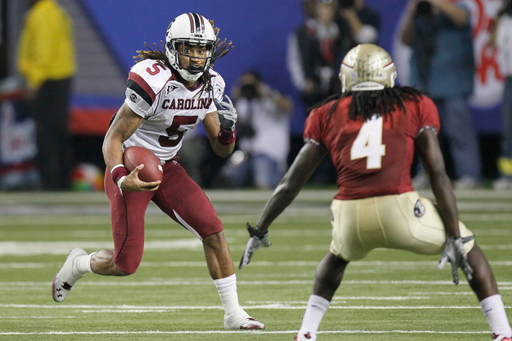 2010: Named third-team All-American by the Associated Press… selected first-team All-SEC by the league’s coaches and by Phil Steele, and was a second-team All-SEC pick by the AP… named second-team All-Sophomore by CollegeFootballNews.com… named Midseason All-America Second Team and Midseason All-SEC First Team by Phil Steele… named preseason first-team All-SEC by both the league coaches and the media… preseason watch list candidate for the Thorpe and the Bednarik awards… named to the inaugural Paul Hornung Watch List, recognizing the nation’s most versatile player… led the team with 79 tackles, including 6.0 for loss and 3.0 sacks… responsible for four opponent turnovers including three interceptions… took a pair of snaps at quarterback in the opener vs. Southern Miss… ran once for 14 yards and missed on his only pass attempt… recovered a Georgia fumble inside the Carolina 5-yard-line and returned it 13 yards to keep the Bulldogs out of the end zone… intercepted a pass and returned it 80 yards for a touchdown vs. Furman, his first career score… registered nine tackles including eight solo stops at Auburn with 1.0 tackle for loss… shared the team lead with nine tackles vs. Alabama, including a career-best 2.0 sacks… forced a fumble with a sack on the Arkansas goal line, which was recovered by Byron McKnight and returned for a touchdown… had an interception against Florida with a nine-yard return… led the team with seven tackles vs. Clemson… had his third interception of the season in the Chick-fil-A Bowl against Florida State… also completed his only pass of the year in that contest, a 29-yarder… began the season as the primary punt returner… had nine returns for 47 yards (5.2 avg) with a long return of 19 yards… was one of only six players to earn first-team All-SEC honors by either the Associated Press or coaches and also be named to the Fall Academic Honor Roll.

2009: Enrolled in January and went through spring drills… earned Freshman All-America honors by Phil Steele, CollegeFootballNews.com and Scout.com… also named Freshman All-SEC by the league’s coaches… started every game at cornerback… ranked fifth on the team with 56 tackles including 39 solo stops… had 6.0 tackles for loss including three sacks… had one interception and eight pass breakups… logged a season-high 10 tackles against Florida… also had eight stops against FAU and seven at Arkansas… forced a pair of fumbles and has recovered two fumbles… averaged 10.1 yards on 15 punt returns… returned a punt 75 yards for a touchdown at Tennessee, only to have it called back on a penalty that would not have affected the return… played quarterback in the ‘Wildcat’ formation vs. Clemson… had 20 yards rushing on five carries and completed a 39-yard pass to Alshon Jeffery in leading the Gamecocks to a touchdown in his only series… earned the Ernest A. Brooks Memorial Award as the MVP of the Carolina-Clemson game.

HIGH SCHOOL: Graduated from South Pointe High School in Rock Hill, S.C., in December 2008… earned first-team All-State honors from The State as a senior playing for head coach Bobby Carroll… named to the prestigious PARADE All-America team and was a first-team All-American by EA Sports… named ‘Mr. Football’ for the state of South Carolina… helped his team to a perfect 15-0 record and the South Carolina AAAA Division II title as a senior… rushed for 1,331 yards and 23 touchdowns and passed for 1,771 yards with 14 scores… rushed for 119 yards and three TDs and passed for 69 yards and another score in the state championship game win over Northwestern… played quarterback in the 72nd Shrine Bowl Game of the Carolinas… rushed for 71 yards and passed for 28 more to lead the Sandlappers to a come-from-behind victory over the Tar Heels, earning Offensive MVP honors… selected to participate in the Under Armour High School All-American Game in Orlando… surpassed the 1,000-yard mark both passing and rushing in 2007… a four-star prospect who was the second-best prospect in the state of South Carolina, the nation’s sixth-best ‘athlete’ and listed 84th overall by Rivals.com… considered a five-star prospect and the nation’s third-best safety according to Scout.com… listed first among South Carolina players and 48th overall among SuperPrep’s Elite 50… listed among PrepStar’s Top 250… ranked 18th on the ESPNU 150… had offers from more than 30 programs while choosing to play his college ball at Carolina… played with Gamecock teammate DeVonte Holloman at South Pointe.