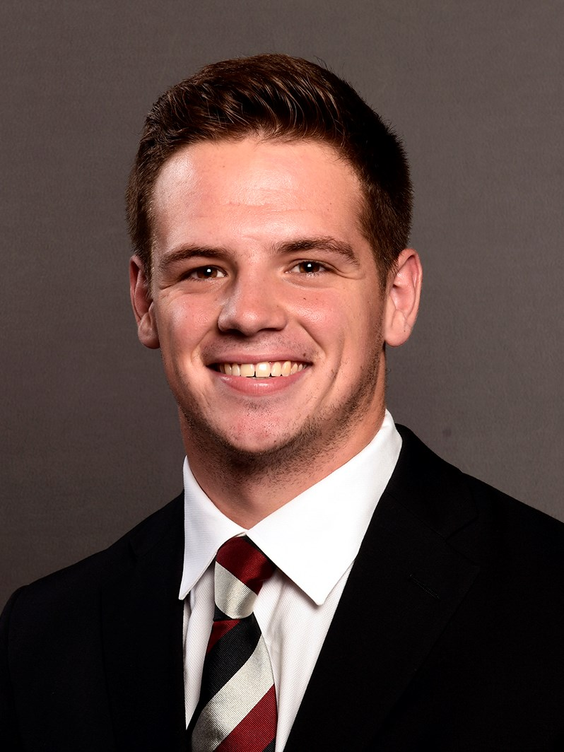 2019
Senior quarterback who started the season opener against North Carolina… suffered a Lisfranc injury to his foot late in the game, requiring season-ending surgery during the second week of September… granted a redshirt and elected to transfer to Utah after graduating in December… named the Harold White GPA Award winner for the offense at the 2019 Garnet & Black Spring Game.

2018
Named a team captain and was selected by his peers as the Leadership Award winner for the offense… completed 240-of-388 passes (61.9 percent) for 3,171 yards with 27 touchdowns and 14 interceptions… ranked fourth in the SEC in passing yards per game (264.2) and touchdown passes, fifth in total offense (270.8) and sixth in passing efficiency (146.3)… ranked second on Carolina’s single-season charts in touchdown passes, third in passing yards, fourth in touchdowns responsible for (29), sixth in completions and seventh in attempts… completed a school-record five passes of 70-yards or more… started 12 of 13 games, missing the Missouri game with a knee injury, suffered late in the game at Kentucky… had his best career day in SEC action in the win over Ole Miss, going 22-for-32 through the air for 363 yards and two touchdowns while also rushing for the game-winning touchdown with 5:50 left in the 4th quarter… put up perhaps the most efficient effort of his career against Chattanooga, going 25-for-29 for 339 yards and a then-career-best four touchdowns… set program records with 510 passing yards and five touchdowns against Clemson… completed 32-of-50 passes against the Tigers, who entered the contest with the second-ranked defense in the country… his 510 passing yards were the most by an SEC quarterback this season, the eighth-most by an SEC quarterback ever in a single game, and the most by any quarterback in the history of the Carolina-Clemson rivalry… tossed three touchdowns against Akron, becoming the first Gamecock since 1995 to throw three or more touchdowns in three-straight games… named the 2017-18 SEC Sportsmanship Award winner.

2017
Sophomore quarterback who was selected as one of four permanent team captains… recognized by his teammates for the Leadership Award for the offense… took every meaningful snap during the season… completed 245-of-394 passes (62.2 percent) for 2,794 yards with 18 touchdowns and 12 interceptions… among SEC quarterbacks, ranked second in pass completions, second in pass attempts, sixth in passing yards per game (214.9), sixth in pass completion percentage, tied for fourth in touchdown passes and seventh in total offense (221.5)… his 2017 totals rank seventh in school history in single-season passing yards, fourth in pass attempts, fourth in pass completions, 10th in completion percentage and tied for seventh in passing touchdowns… tied for the team lead with six touchdowns scored… best game was a 24-for-36 performance for 304 yards against Kentucky, with a pair of touchdowns… the 304 yards passing was a career-best against an SEC opponent… had a career-best 16-consecutive completions in that contest… went 152 passes without an interception early in the season… threw three touchdown passes against both NC State and Arkansas… rushed the ball six times for a career-best 47 yards in the win over Vanderbilt… accounted for three touchdowns against both the Commodores and Wofford… became the 14th quarterback in Carolina history to surpass 3,000 career passing yards in the Tennessee game… named the MVP of the Outback Bowl after completing 19-of-32 passes for 239 yards and two touchdowns in the win over Michigan… named to the SEC Fall Academic Honor Roll… named the Joe Morrison Offensive Player in the Spring… worked as a counselor at the prestigious Manning Passing Academy in June.

2016
Started each of the final seven games after not playing in the first six contests of the season… was 4-3 as a starter… was 125-for-190 for 1,420 yards and nine touchdowns and just four interceptions… his 65.8 percent completion percentage ranks fourth in Carolina history for a single-season… shared Steve Wadiak MVP honors with Deebo Samuel… made his debut as the starting quarterback against UMass… went 17-for-26 for 201 yards and two touchdowns vs. the Minutemen… became the fifth Gamecock true freshman to start at quarterback in the SEC era… won his first career start against an SEC opponent as the Gamecocks upset Tennessee… completed 15-of-20 passes against the Vols for 167 yards and two TDs… connected K.C. Crosby for a 35-yard TD in the fourth quarter that proved to be the game-winner against UT… improved to 3-0 as a starter and earned SEC Freshman of the Week accolades when he led the Gamecocks to a win over Missouri, going 22-for-28 for 254 yards and two touchdowns… became the first Carolina true freshman quarterback to win his first three collegiate starts since Steve Taneyhill notched four-straight wins in 1992… went 18-for-33 for 213 yards in his first road start at Florida… set career highs with 32 completions, 43 pass attempts and three touchdowns in the Birmingham Bowl against USF… set the school record for bowl games and Birmingham Bowl records for passes completed (32), yards passing (390) and total offense (381) in the overtime loss to the Bulls… passed on his senior year of high school to enroll at South Carolina in the summer of 2016… named the South Carolina Male New Student-Athlete of the Year… named to the 2016-17 First-Year SEC Honor Roll.

HIGH SCHOOL
Graduated following his junior year to enroll at South Carolina… threw for 2,834 yards and 28 touchdowns in 2015, leading the Bulldogs to a 12-1 record… coached by Brian Blackmon… grew up in Duncan S.C. and attended Byrnes High School as a freshman before his family moved to Alabama… ranked as the No. 5 pro style quarterback by 247Sports…Scout considered him the No. 9 passer in the class of 2017… was the second-ranked quarterback and the 33rd-ranked player overall in the ESPN Junior 300… selected to play in the Under Armour All-American Game.

PERSONAL
Jacob L. Bentley was born Nov. 23, 1997… is a sport and entertainment management major who graduated in December 2019… father, Bobby, is Carolina’s tight ends coach and previously was a successful high school coach at Byrnes (S.C.) and at Presbyterian College… step-brother, Chas Dodd (Rutgers), and brother, Shuler Bentley (ODU/Murray State), both have started at quarterback in college.