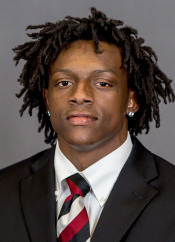 2020
Junior who earned second-team All-SEC honors from the league’s coaches and third-team honors from Pro Football Focus… started each of the first seven games at cornerback… credited with 16 tackles… led the team with eight passes defended, including six pass breakups and a pair of interceptions… averaged 1.14 passes defended per game, second in the SEC… collected a season-high five tackles at Florida… had the best game of his career in the win over Auburn… credited with three tackles, two interceptions and four pass breakups, earning Walter Camp National Defensive Player of the Week and SEC Defensive Player of the Week accolades… opted out of the season’s final three games following the dismissal of head coach Will Muschamp… . named to the SEC Fall Academic Honor Roll… credited with 101 career tackles, 23 pass breakups and two interceptions… invited to the NFL Combine.

2019
Sophomore cornerback who started all 12 games… collected 40 tackles with a team-high nine pass breakups and two forced fumbles… had five tackles, two forced fumbles, a sack and a pass breakup in season-opener vs. North Carolina… matched his career high with seven tackles in the upset win at Georgia… had a pair of pass breakups against both Alabama and Kentucky… selected by the coaches as the Rex Enright Defensive Player of the Spring… named to the SEC Fall Academic Honor Roll.

2018
True freshman defensive back who played in 11 contests making 10 starts… recognized on the 247Sports midseason true freshman All-America team and was an SEC All-Freshman selection by the league’s coaches… shared the Most Productive Player Award for the defense with T.J. Brunson… became just the seventh true freshman to start in the season opener for Carolina since the 2009 season… had 45 tackles with 4.0 tackles for loss, 2.0 sacks, and eight pass breakups, second on the squad… tied for the SEC lead among freshmen with 4.0 tackles for loss, tied for second with 2.0 sacks, third in passes defended with eight, and third with 4.1 tackles per game… named the SEC Freshman of the Week for his efforts in the win over Mizzou when he was credited with four pass breakups… also logged three tackles, including a key diving trip, forcing Damari Crockett to step out of bounds instead of taking it in for a TD, a drive in which the Tigers failed to score… led the secondary with a season-best seven tackles against Texas A&M… missed the final two regular season games with an ankle injury… returned for the Belk Bowl where he recorded six tackles including a sack against Virginia… named to the SEC First-Year Academic Honor Roll.

HIGH SCHOOL
Graduated from Alpharetta (Ga.) High in 2018… cornerback who helped the Raiders win 11 games as a senior, making it to the third round of the Georgia AAAAAA playoffs… was a first-team all-state selection by the Georgia Sports Writers Association… earned second-team All-USA Georgia football team accolades as selected by USA TODAY… logged 44 tackles, including 38 solo stops, and led the Raiders with five INTs and 12 pass breakups… averaged 12.2 yards on 13 punt returns… selected as an Under Armour All-American and attended The Opening Finals camp… coached by Jacob Nichols… listed as the No. 22 cornerback prospect in the country, and 247’s national composite rankings put him as the No. 206 overall recruit… Rivals ranks him as the 23rd-best player in Georgia, the 20th-best cornerback in the country and No. 189 overall… rated No. 145 on the ESPN300 list and No. 334 on the PrepStar 350 list.

PERSONAL
Jaycee Horn was born Nov. 26, 1999… is a sport and entertainment management major… is the son of former NFL wide receiver Joe Horn.