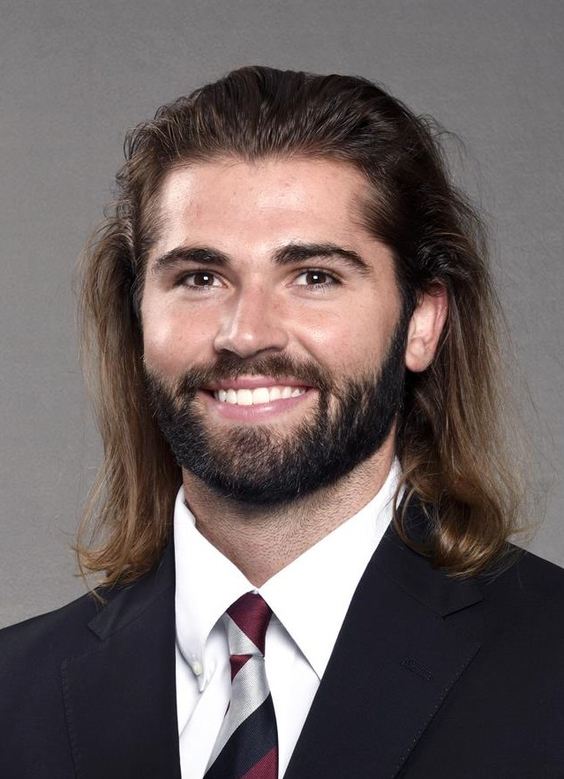 2020
Graduate transfer from Colorado State who joined the squad in January… did not participate in spring drills while continuing to rehab from an ACL injury, the third of his career… earned the starting nod in fall camp and started each of the first eight games… completed 127-of-215 passes (59.1 percent) for 1,411 yards with six touchdowns and six interceptions… also scored four rushing touchdowns… named a semifinalist for the Mayo Clinic Comeback Player of the Year… best game came in the season opener against Tennessee when he hit on 25-of-39 passes for 290 yards with a TD, and added a rushing touchdown… was 28-of-47 for 212 yards and two touchdowns at Florida… scored twice on the ground at Vanderbilt, becoming the first Gamecock quarterback to have a multiple rushing touchdown game since Jake Bentley in 2017… threw for 234 yards including a season-long 57-yarder at LSU… appeared in 26 games during his collegiate career making 19 starts… was 390-of-648 passing (60.2 percent) for 4,734 yards with 29 touchdowns and 17 interceptions… single-game highs were 34 completions, 54 attempts, 374 yards and four touchdown passes (twice)… had five career 300-yard passing games… took part in the College Gridiron Showcase following the season.

2019
Started each of the first three games for the Colorado State Rams… completed 69-of-102 passes (67.6 pct.) for 840 yards with eight touchdowns and two interceptions… averaged 280.0 yards passing per game… completed 31-of-47 passes for 374 yards with three touchdowns and two interceptions in the season opener against Colorado… completed 25-of-32 passes for 367 yards (351 in the first half) and four TDs with no picks versus Western Illinois… was 13-for-23 for 99 yards and a score at Arkansas before suffering a season-ending knee injury.

2018
Selected by his Colorado State teammates as one of four season captains… worked his way back from a March 2018 surgery on his left knee to be cleared to play by the season opener… saw action in a backup role in six games before starting the last four… completed 58.9 percent of his passes (119-of-202) for 1,387 yards and seven touchdowns, with seven picks…in his four starts he completed 61 percent (94-of-154) for 1,099 yards and 5 TDs with 6 INT, averaging 274.6 yards per game… on Aug. 31, he appeared against Colorado, his first game action since Oct. 8, 2016, when he suffered a torn ACL in a game against Utah State… made his first start of the season vs. Wyoming on Oct. 26 and finished 34-of-54 for a season-high 333 yards along with a rushing touchdown, the second of his career… completed 27-37 passes for 296 yards and two touchdowns, with two interceptions vs. Utah State.

2017
Redshirted during his second season at Colorado State.

2016
Enrolled at Colorado State in January and went through spring drills… played in five games and started four as a true freshman, completing 75-of-129 passes (58.1 pct.) for 1,096 yards and eight touchdowns with two interceptions before suffering a season-ending knee injury against Utah State on Oct. 8… his 146.9 passer efficiency rating ranked third in the Mountain West and 34th in NCAA FBS at the time of his injury… ranked in the top five among freshman quarterbacks in passer efficiency rating (5th), passing yards per game (5th), and passing yards per completion (2nd)… was the only true freshman in the country ranked in the top five of all three categories at the time of his injury… completed 21-of-27 for 315 yards and four touchdown passes, plus a 51-yard touchdown run vs. Northern Colorado… the 315 passing yards were the most by a CSU QB making his first career start… the 51-yard touchdown run was the longest rush by a CSU QB since Bradlee Van Pelt in 2002… recorded season highs in completions (23), passing attempts (41) and passing yards (370) against Wyoming… passed for 203 yards with two touchdowns against Utah State in his fourth consecutive start before exiting the game in the third quarter with a torn left anterior cruciate ligament.

HIGH SCHOOL
Graduated from Dorman High School in Roebuck, S.C. in 2015… holds school records for career touchdown passes, completion percentage and passing yards in a season and career… a two-time all-state, all-region and all-area selection… team captain and MVP as a senior in 2015, leading the Cavaliers to the South Carolina state championship game… head football coach was Dave Gutshall… held the highest grade-point average on his team… lettered three years in football and two in basketball.

PERSONAL
Collin M. Hill was born Oct. 9, 1997 in Dayton, Ohio… owns a business degree from Colorado State University and is working on a Master’s in educational technology.