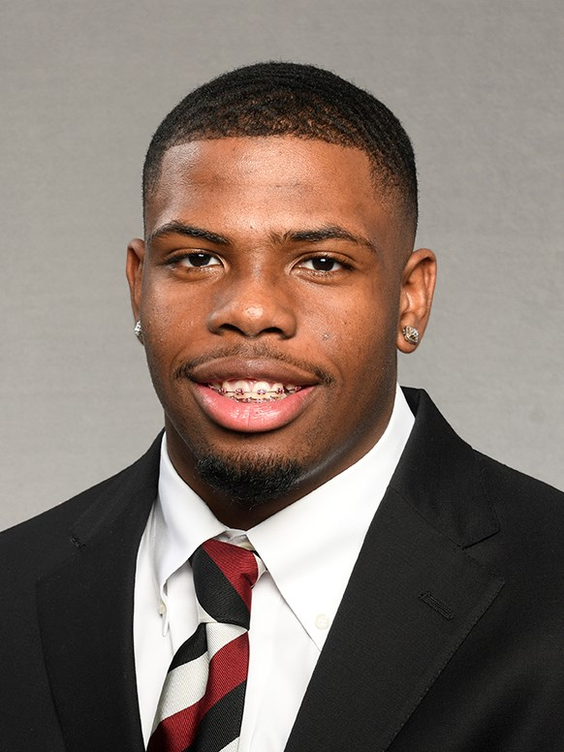 Three-year player who elected to forego his final year of eligibility to turn pro… finished his career with 1,976 rushing yards, 18th on the school’s all-time list… also scored 23 career touchdowns, tying for seventh on the school’s all-time list… appeared in 28 games over his career with 16 starts… logged eight 100-yard rushing games in his career, including a pair of 200-yard efforts… is one of only two Gamecocks, along with Mike Davis, to own two carries of 75 yards or longer… was an All-SEC running back in 2020 after leading the league in rushing… invited to the NFL Combine following the season.

Plagued by injuries for much of the season… despite that, still led the team in rushing with 659 yards on 152 carries with four touchdowns… slowed in fall camp after undergoing a minor back procedure on his back over the summer and was not dressed for the opener due to illness… also hampered by a mid-season ankle injury… best game of the regular season came against Florida when he rushed 16 times for 128 yards, an average of 8.0 yards per carry… went out with a bang, rushing 31 times for 182 yards and a touchdown in the Duke’s Mayo Bowl win over North Carolina.

Became the first Gamecock to lead the SEC in rushing yards per game (113.8) while logging the fifth-best single-season rushing total in school history (1,138) despite playing in just 10 games, all starts… notched the 11th 1,000-yard rushing season in school history and the first since Mike Davis in 2013… his 113.8-yard average ranks fifth in school history… was a first-team All-SEC selection by the Associated Press, a second-team performer according to the league’s coaches and Phil Steele, and a third-team selection by ProFootballFocus… recorded five 100-yard rushing games, including a pair of 200-yard games, and set a school record with five rushing touchdowns at Ole Miss… ranked seventh in the nation in rushing yards, 11th in rushing yards per game and 23rd in rushing yards per carry (6.15)… tied for fifth in the country with 15 rushing touchdowns and eighth with 16 TDs overall… scored 16 of the Gamecocks’ 29 touchdowns… ranked fourth in the SEC and 13th in the nation in scoring at 9.6 points per game… his 96 points scored tied for sixth in school history, while his 15 rushing touchdowns and 16 TDs overall both tied for second in school annals… one of only four players to have multiple 200-yard rushing games, joining Jaret Patterson (Buffalo), Michael Carter (North Carolina) and Mohamed Ibrahim (Minnesota)… made his first career start against Tennessee… notched first career 100-yard game in SEC play with 22 carries for 100 yards and a TD at Florida… also caught a TD pass in that contest… rushed 21 times for 171 yards (8.1 ypc) at Vanderbilt along with two TD… included was a career-long, 88-yard TD run, the longest run by a Gamecock since Bobby Wallace in 2006, tied for the fourth-longest run in school history, and tied for the sixth-longest run from scrimmage in the FBS in 2020… led the team with 12 carries for 126 yards and two TDs at LSU… turned in the best game of his career at Ole Miss, setting the school record with five rushing TDs  while matching his career high with 25 rushes for a career-best 243 yards, the fifth-highest single-game total in school history… tied the school record with 30 points scored in a game… averaged 9.7 yards per carry and had TD runs of 46 and 44 yards against the Rebels… finished the season with a 21-carry, 210-yard effort at Kentucky… joined George Rogers (3) and Marcus Lattimore (2) as only Gamecocks with multiple 200-yard games in a career, and the only player to have multiple 200-yard games in a single season.

True freshman who played in six games… carried 21 times for 179 yards, an 8.5-yard average, with four touchdowns… made his Gamecock debut a memorable one against Charleston Southern… rushed six times for 147 yards with three touchdowns… the three rushing TDs tied the school record and he became the first true freshman to score three rushing touchdowns since Marcus Lattimore in 2010… scored from 1-, 45- and 75-yards out… became the third true freshman to rush for 100 yards in his debut in the last 20 years, joining Derek Watson (118 vs. NC State in 1999) and Deshaun Fenwick (112 vs. Chattanooga in 2018)… was sidelined with a torn groin muscle for what was originally thought to be a season-ender, but has made a speedy recovery and returned to the active roster after missing five games… logged 10 carries for 20 yards and a touchdown against Vanderbilt… caught three passes on the season, all against Texas A&M, for 26 yards… named one of three Strength & Conditioning Award winners, as selected by the coaches following the season… enrolled at Carolina in January and went through spring drills… named to the SEC First-Year Academic Honor Roll.

Prepped at Bradwell Institute in Hinesville, Ga… graduated in December  2018… coached by Ross Couch… finished his season with 1,696 all-purpose yards and 24 touchdowns… rushed for 1,556 yards and 22 TDs, including eight 100-yard games as a senior… was the region’s leading rusher, the No. 2 rusher in the class and No. 6 in all classifications in 2018… named Georgia Region 2-AAAAAA Player of the Year… was a WJCL Big 22 All-Star… was the region’s Offensive Player of the Year as a junior in 2017 when he ranked 16th in rushing in Georgia with 1,680 yards and scored 16 touchdowns… logged 4,100 rushing yards in his career with 18 100-yard rushing games and 42 rushing TDs… considered the 68th-best player in the Peach State, the 45th-best running back in the country by 247Sports Composite.

Kevin J. Harris was born Nov. 17, 2000… is pursuing a degree in mechanical engineering.