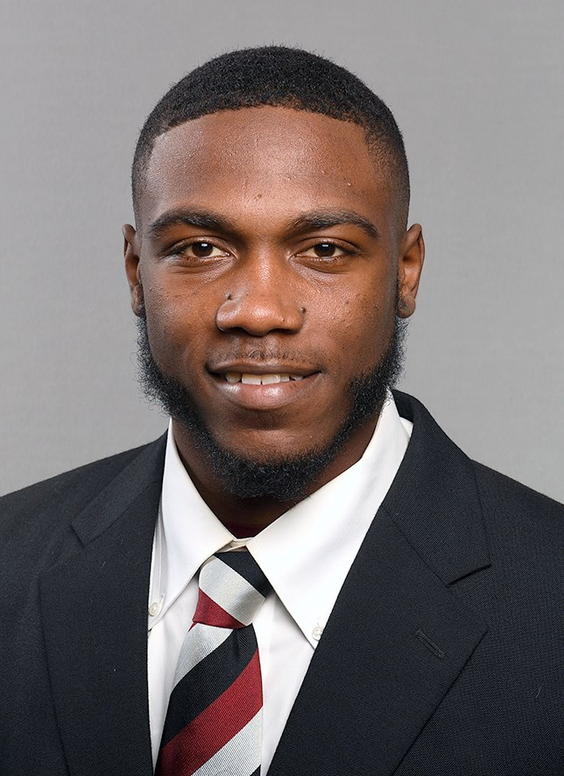 2020
The top receiver on the squad… named one of four permanent team captains… earned second-team All-SEC honors from Phil Steele and from Pro Football Focus… started all nine games in which he appeared… paced the team with 57 receptions for 633 yards and four touchdowns… ranked fifth in the SEC in receptions per game (6.33) and ninth in receiving yards per game (70.3)… opened the season in impressive fashion with a 10-catch, 140-yard, one touchdown performance against Tennessee… set a career high with 12 catches at Florida for 85 yards and a score… became the first player in school history to record double-digit receptions in back-to-back games… logged eight receptions for 76 yards with a touchdown in the upset win over Auburn… posted 10 receptions for 117 yards and a score at Ole Miss… appeared in 43 games during his four-year career at Carolina with 35 starts… caught 174 passes for 2,204 yards and 13 touchdowns… finished his career ranked fourth in receptions, behind only Bryan Edwards, Kenny McKinley and Alshon Jeffery… ranked eighth in career receiving yards in Carolina history… invited to the Reese’s Senior Bowl and the NFL Combine following the season.

2019
Junior who was second on the squad with 43 receptions for 489 yards… averaged 11.4 yards per catch with a pair of touchdowns… started all 10 games in which he played… missed the Vanderbilt and Appalachian State games with a hamstring injury… best game came against Tennessee when he caught a career-high 11 passes for a career-high 156 yards, including a 75-yard touchdown catch on the game’s first play… had six receptions for 90 yards and a touchdown against Alabama… led the team with five receptions against both North Carolina and Clemson… returned 12 kicks for 263 yards, a 21.9-yard average… long return was 60 yards in the season opener against North Carolina.

2018
Sophomore who hauled in 45 passes for 673 yards, a 15.0-yard average, with four touchdowns… played in 12 games, making nine starts… missed the Akron game with back spasms… had a pair of 100-yard receiving games… had the biggest game of the season in the Vanderbilt win with five catches for 119 yards and a touchdown… tallied three catches for 51 yards and a score against Texas A&M… reeled in three catches for 82 yards in the Ole Miss win… made the best play of the Chattanooga win, shedding several tackles as part of a 53-yard touchdown catch… logged a then career-best nine catches for 109 yards and a TD against Clemson… had six catches for 76 yards in the Belk Bowl vs. Virginia… also had a 62-yard kickoff return in the bowl game.

2017
True freshman who played in 12 contests, making seven starts… hauled in 29 passes for 409 yards, a 14.1-yard average, with three scores and without a drop… ranked third on the team in receiving yards, fourth in catches and second in yards per catch… ranked third among freshmen in the SEC with 2.4 catches per game and third with 34.1 receiving yards per game… also returned five kickoffs for 76 yards… made his first career start at Missouri and caught four passes for 22 yards… hauled in three catches for a then career-best 86 yards and his first touchdown at Texas A&M… led the team with five receptions for 76 yards in the win over Vanderbilt, including a 36-yard TD… logged three catches for 30 yards in the Wofford win before leaving win an injury which forced him to miss the Clemson game… returned for the Outback Bowl game versus Michigan and responded with three catches for 59 yards, including a 53-yard touchdown reception, the longest of his career.